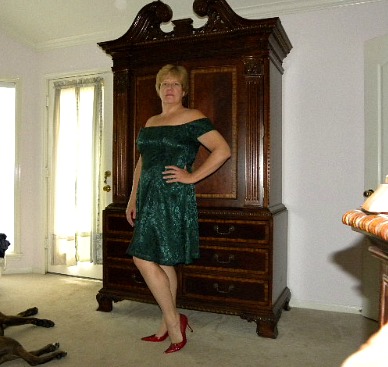 So, I had my plan all set out with October’s challenge  “Dress” it up in Frocktober.  Then, I took a look at Wikipedia for the definition of a Frock.  This is what I found:

“To Frock up”, mmm, I have just the right thing for this month’s challenge in my sewing stash (not to mention it has been sitting in my stash since mid-1990’s when I moved, then moved again, and again, and yes, one last time, before I landed in my current home in Houston).   That sounds like a lot of moving around, but two of those moves were to temporary housing while I searched for permanent abodes.

The material I had chosen for this dress (way back when) is a bit of a flimsy material, and slippery, which makes it difficult to work with.

Then came a saving post over the blogesphere – how to stiffen your material in order to work with it during the construction phase.  Gelatine water!  Who would have thought that something so simple would be such a great thing!  Only one problem… My material is a very dark green, AND I didn’t even think about “color fastness” as I placed my material into a gelatine water bath.  Correction – a HOT gelatine water bath!  Oh my, the water started turning a dark green almost immediately!  I freaked – to say the least.  But since I had already started the process, I figured I might as well finish it.  I made sure all the material was saturated then immediately took it out of the water, rung it out in a towel wrap, and hung it up to dry.

Luckily, the material didn’t lose much of its color; AND the gelatin bath did exactly what it was supposed to do! 🙂

On the plus side, I used the water with the dye from the dress to dye some old white pillowcases I have for another project.  I left them in the water over night, and they turned out a nice light shade of blue/green.  🙂

Now on to that dress!  The pattern I used was “It’s So Easy” Simplicity pattern 9874.  Not so fast, Simplicity – this dress wasn’t quite that “Easy”.

The body of the dress wasn’t difficult at all (unless I count the alternations needed to fit me properly).  Those sleeves on the otherhand, took me the majority of the time to make this thing!  They include some elastic in the “hem” of the lining, which helps hold the sleeves in place; along with some boning along the upper seam so they stick out nice and stiff.  I really like the effect, but it was a bit of a pain…

So now, I have my holiday dress!