Well, I actually managed to complete a challenge and with time to spare! I completed both the maternity top and skirt basically within the first week of March, but it’s taken me this long to replace the battery in my camera to get photos uploaded… when the photos were taken I was about 17 weeks along – now at 20 weeks I’ve actually popped and look pregnant rather than I’ve eaten all the pies. Can’t believe I’m already at the half-way point!

As a reminder, the overwhelming winner that you voted for was the Megan Nielsen maternity skirt and top. Not surprising really! 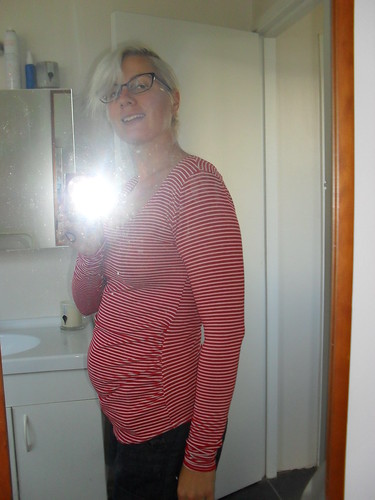 Both patterns were simple to understand and sew up, especially now I have use of an overlocker. I was a bit gung ho with the top and inserted one of the sleeves inside out, but I think that was the only issue I had. Looking back at the photos just now I remembered I also had to take in the arms as they were quite baggy on me – I usually have the opposite problem!! I made the top up in a size M, based on the recommendation to use your first trimester/early 2nd trimester measurements. 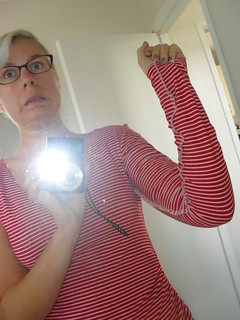 I think for the next time I make the top I need to narrow the shoulders/go down a size as they seem to be sitting too wide? There is plenty of room for the belly to expand so I’ll stick with that sizing. I’m not really sure about the shoulder fix though so suggestions are welcome! 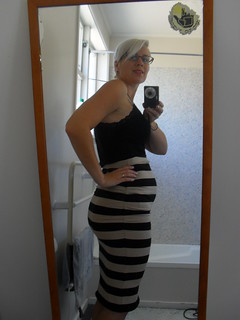 For the skirt, this fabric came free with the pattern, which I got off Trademe, already cut to a size S. The previous owner never got around to making it up and sent it to me for free (yay) so I figured based on my measurements I could probably get away with using it. I think it’s fine for now, but not sure how far through I’ll be able to wear it – I’m planning on making up the medium for my next skirt. I think I’d like a bit more ruching down the side as well so might need to find some stretchier elastic or just increase the length of ruched portion…