The May Monthly Stitch challenge is to sew with knits so if ever there was a pattern for newbies to try, the Mabel is definitely it. This latest release from Colette Patterns has so much going for it that in one week I have sewn it 4 times!!

This is the first pattern release for Colette patterns with expanded sizes and it was so nice to be able to check my size on the back flap and simply cut out the pattern without tons of math and grading. For my first version, I chose to make the pencil skirt length with the back vent but the view 1 front. I cut the front long enough to match the back and cut a 3x size for the hips and 2x for the waistband. My first attempt ended up being a bit large in the back waistband so for my next version, I cut the waistband between XL and 2XL which worked well.

My first version used a wild (for me) blue and black leopard print from Fabric.com. I initially bought 1.5 yards but even sewing the pencil length version, I only needed 1 yard. I ended up making the second version in view 1 for my daughter, Cat, with the remaining half yard. We are now Mabel “twinsies”!

As if two Mabels in three days was not enough, I ended up making a third version from view 2 over the weekend in a Riley Blake navy and white polka dot. The fabric for this version was much thinner and behaved a bit differently while sewing up, but still took only a little over 1 hour to make. I added some vintage white buttons down the faux placket and am over the moon with the end result. 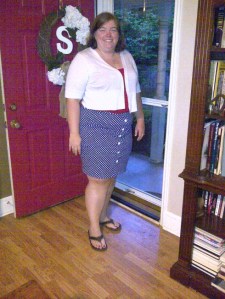 To finish off my 7 day Mabel sewing binge, I stitched another in a plum chevron fabric that was on clearance for $2.99 a yard. I think this version will work well both now and into fall. Not bad for a $3.00 skirt! 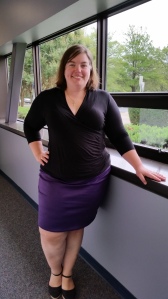 I think I may be a knit convert 🙂

13 thoughts on “A Month of Many Mabels”