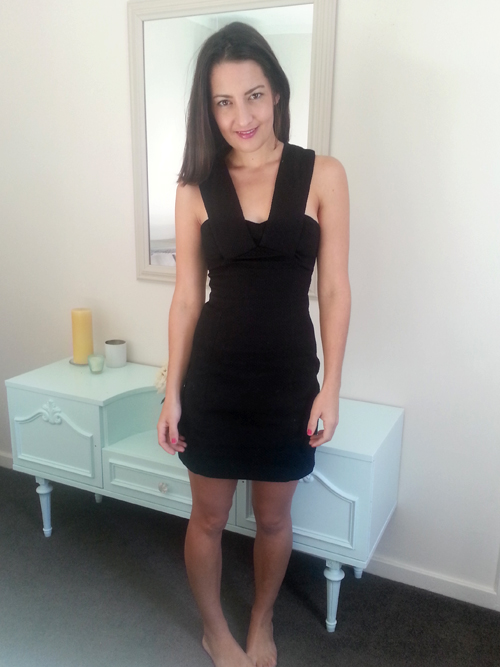 Indie pattern month is very bad timing for me this year. June is crammed full with assignments and exams so it’s been quite difficult to commit myself to much sewing but… you know, procraftination prevails. It seriously took me so long to choose a pattern – pretty much every indie pattern company is ‘new to me’ so I had a lot of choice! I eventually decided on By Hand London’s Georgia dress. It’s so hawt!

The fabric I used was a stretch cotton from The Fabric Store, that looks as though it has a waffle weave. I was so close to buying a white stretch cotton but I thought it might look a bit ‘liz hurley’ combined with the shortness of the dress (the woman at the counter agreed!). The texture of the black fabric also won me over. There is an invisible zip down the side seam which I picked out of my stash (and if we’re being honest here, it’s actually dark navy blue). I know it’s sort of boring just using black – but it’s a colour I wear all the time and every girl needs a LBD right? I have already got a colourful printed sateen for my next version though, yippee!

Sorry about the terrible photos, it can be so hard to capture the details in a black garment, especially when you are using a mobile phone as the camera.

The pattern and instructions were fine – it was all quite intuitive to me. I had to do a lot of adjusting to get this right, but I think that’s the nature of fitted silhouette like this and most people would have to make changes. I cut out the size that corresponded with my measurements but it was far too big. I ended up removing 2 inches from the width which took ages because there are a number of seams, and it was difficult to know if the fit was right until the zip was in.

I totally feel like a ‘real housewife of Auckland’ in this dress – ha!

My adjustments were good.. but maybe a little too good as it is a little bit too tight under the bust now. It’s not uncomfortable at all but there are pull lines across the rib cage that don’t look great:( Aside from adding back a little more ease, if I made this version of the dress again I might shorten the straps a tiny bit. I’m not sure if that would be a wise decision or not though, and probably a little more wear is needed to know. Honestly though, I love this dress – the straps are what does it for me. This is something I would definitely try on in a shop and I am 100% going to make it again (maybe even tomorrow!.. hmm though probably not because : revision, gahh).

15 thoughts on “Georgia on my mind”