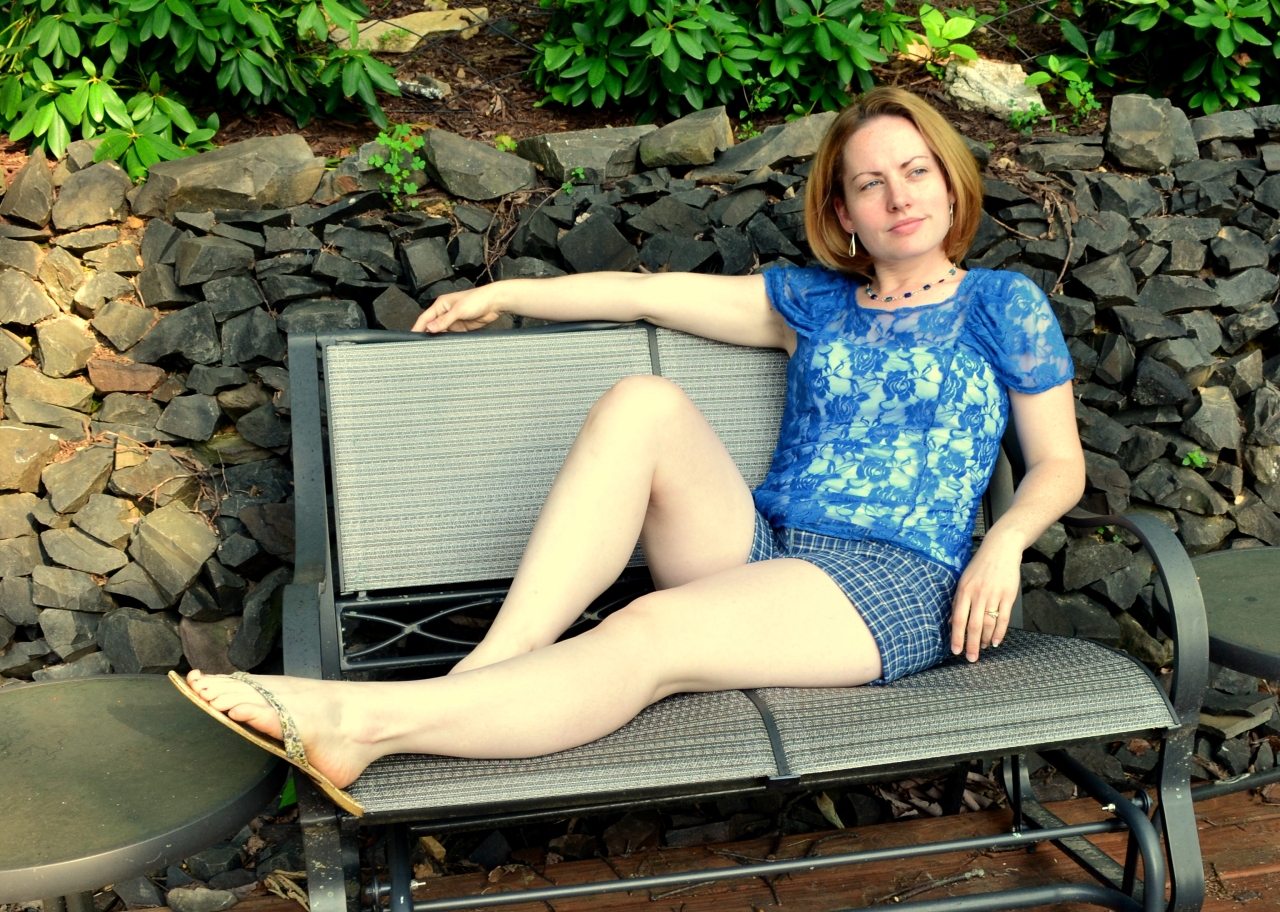 Hi! My name is Erin from Vint Hill Vintage and I’m a Sewaholic. I’m addicted to sewing and Sewaholic Patterns. My drug of choice is the Thurlow Trousers though I like to mix it up now and then with a Pendrell, Cambie, or Alma. 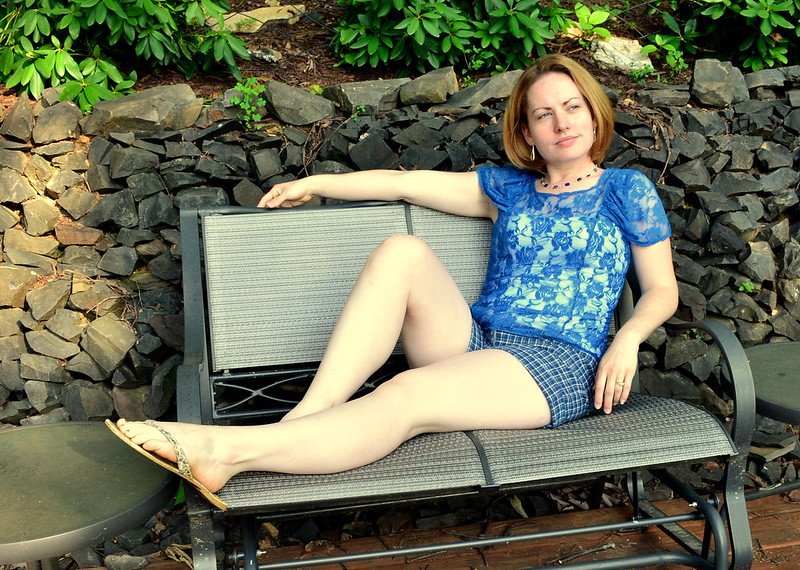 These are view B of the Thurlow shorts made in a “mixed fibers” woven plaid from the bargain bin at my local fabric store. I’ll venture a guess that there’s a fair bit of spandex in there, as they are quite stretchy for a bottom weight woven. I cranked my Steammaster iron up to high and had no problem with melting, though there was some serious visible shrinkage happening.

This is my… uhm…. seven millionth pair of these. Seriously, I’ve lost count now. I knew from previous makes that the ever-awesome pear shape of these pattern pieces meant I’d never be able to match the plaid at the center front, center back, and sides so I opted to match only the side seams, which I find to be the most obvious – and obnoxious – if it doesn’t match.

The back pockets are a bias cut, self-drafted patch pocket which I’ve added to several pairs. I think it makes the shorts a bit more casual, befitting the fabric. I’ve made a few pairs according to the pattern but I think from now on I’ll reserve the welt pockets for some fancy pants. 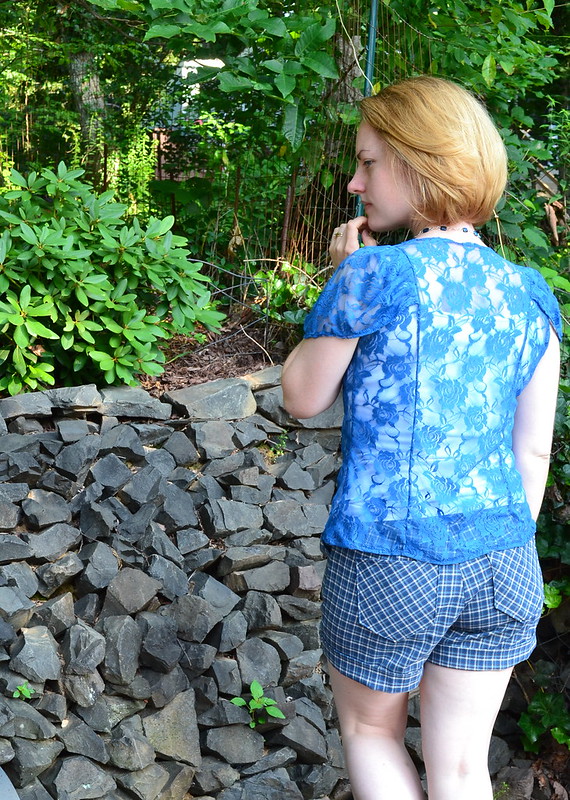 Love that perfectly fitted adjustable center back seam. This pattern was quite literally made for my curvy booty! 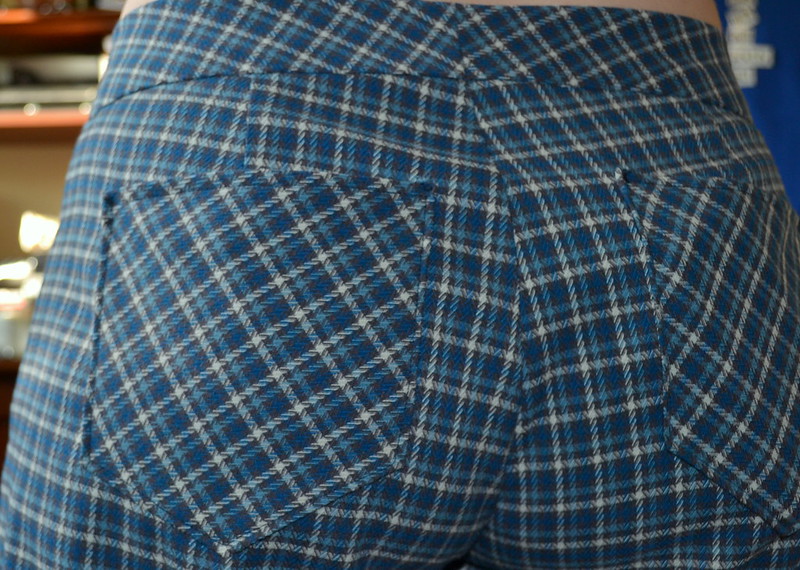 I used a 5″ light blue vintage zipper from my stash. It was still in its package dated 1963. Since the pattern calls for a 4″ zip, I trimmed off just the bottom end past the zipper stop and hand stitched a stop at the 4″ mark so my zipper pull wouldn’t get lost into the abyss of the fly. 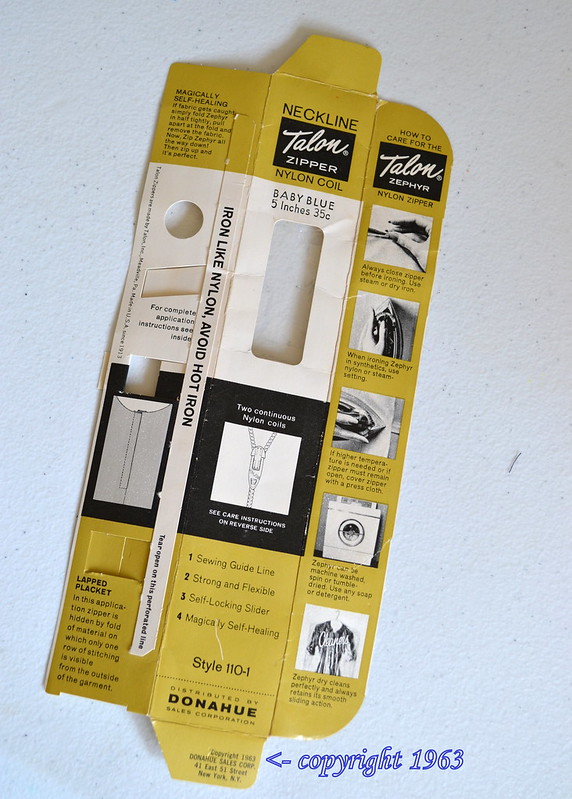 I added a clear button on the inside flap and a wide, flat hook and eye for the main opening. I secured the hook and eye with handworked buttonhole stitches for a neat and tidy closure. 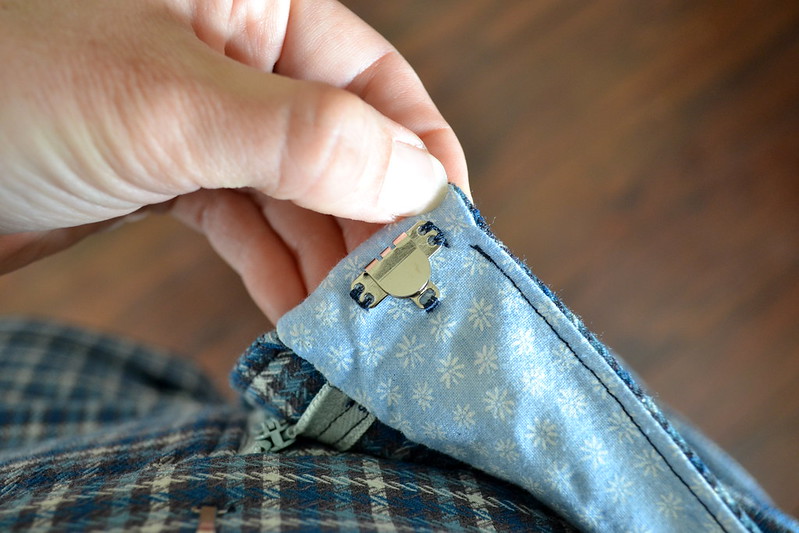 You can also see the light blue daisy cotton print that I used for the lining. This is about the 7th garment that I’ve lined with this stuff. It’s the yardage that never runs out! This photo also reminds me that I always have hand slip stitched the waistband lining in place rather than stitching in the ditch as the pattern calls for. I think it just gives a cleaner finish and is a little more couture.

The whole thing went quite smoothly since I’ve been there and done that many times. I made most of it without even reading the instructions (which are great, by the way) and I was done with this pair in three sewing sessions.

I wish I could say all went smoothly for this Sewaholic Pendrell Blouse. Well, I finished sewing it in under an hour and there weren’t any major glitches, but it was quite the undertaking.

I’ve owned this pattern almost since its release but I’ve never gotten around to making it until now- though there are about 4 fabrics in my stash earmarked for a Pendrell. A word to the wise – when making a pattern up for the first time, don’t dive head first into the shallow end of the pool by using a stretch lace! This fabric is stretchy, slinky, shifty, an uneven thickness, you can’t notch the edges, and pins just fall out/though it. Add in princess seams and the craziest pleated polygon sleeve piece you’ve ever seen and you’ve got yourself a challenge. 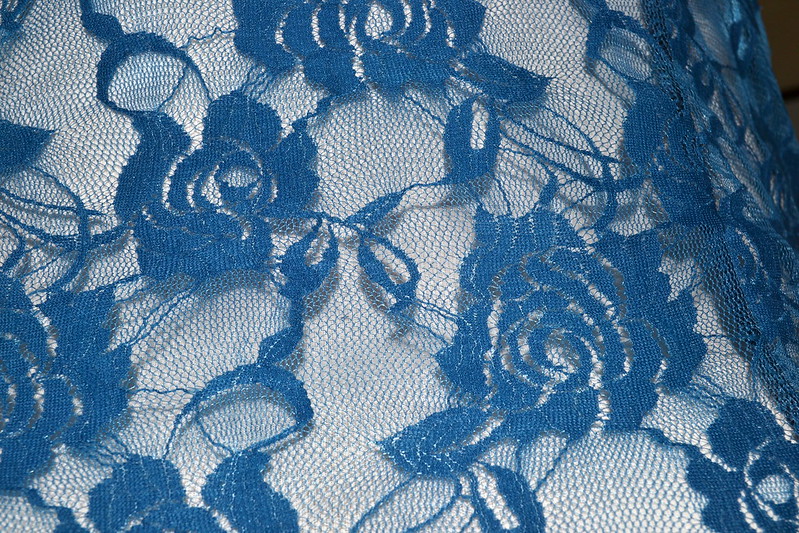 To allow the lace pattern to show through better, I took that sleeve piece, which is supposed to be self-faced by folding a large round-ish piece in half and pleating it, and cut it in half. I omitted the facing side of it and added a half inch to hem. I serged, turned, and top stitch the raw edges. I also omitted the bias binding around the neck and armholes. Then all the raw edges received the same treatment. I just happened to have a tiny amount of the perfect shade of thread and ended with the PERFECT amount. 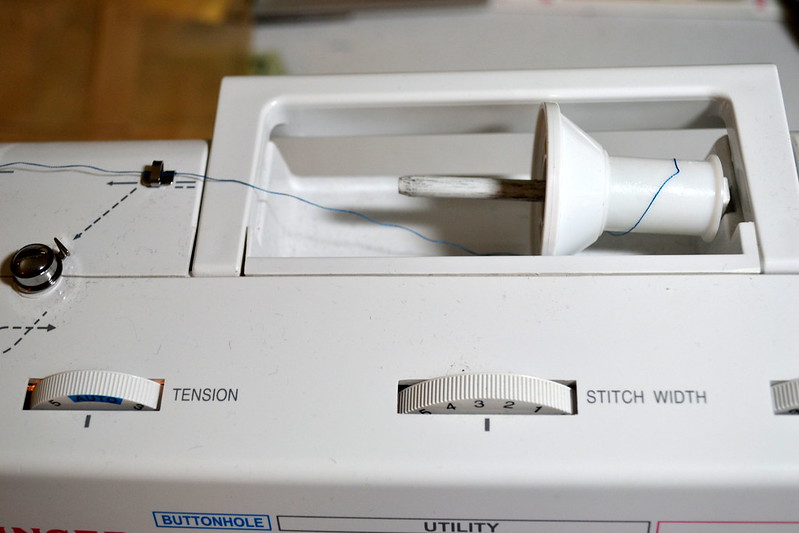 Could you get any closer to the end of the spool? Ha ha! I was on the edge of my seat wondering if I’d be able to complete the top stitching before I ran out!

As for the pattern instructions, I found them super easy to follow, just as I’ve found all Sewaholic patterns. Despite the changes I made, they didn’t warrant reordering the construction. I simply serged and hemmed where I should have applied a binding or folded a sleeve.

After it was all completed, I realized that the sleeves seem too far forward as they’re drafted by centering them over the shoulder seam. It’s not too bad unless you study my shoulders from the side and realize that they look unbalanced. I think next time around I’ll make the sleeves a little smaller and set them back a bit more than called for.

I chose to cut a size 2 rather than my envelope size 10 because I was using a very stretchy knit with a woven pattern and I prefer my clothes to be a bit snug anyway.  I shortened the body by about 5″ below the waist so the tunic length top wouldn’t hang below my short shorts. Surprisingly, going down 5 sizes meant I didn’t have to shorten between the shoulder and bust, and again between bust and waist, which are both typical adjustments for me on any pattern.  I’m really happy with the fit through the entire blouse and I’ll probably make a few more knit Pendrells in the future but for a woven I’ll certainly need to go with a size 8 or 10. 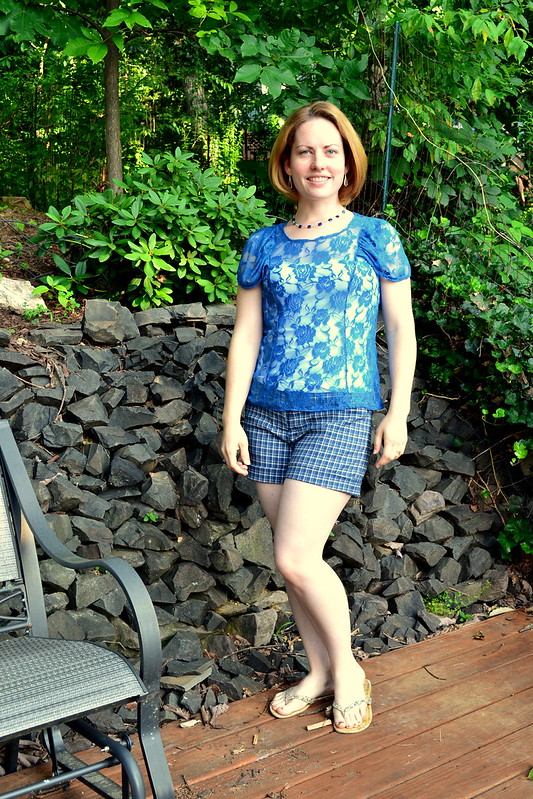 And the outfit as a whole? I’ve layered the lace Pendrell over a basic camisole for modesty and to show off the lace. I carefully chose that bright blue lace to bring out the exact same shade of bright blue in one of the plaid stripes, but when they’re paired together, the top overpowers the shorts for sure so… 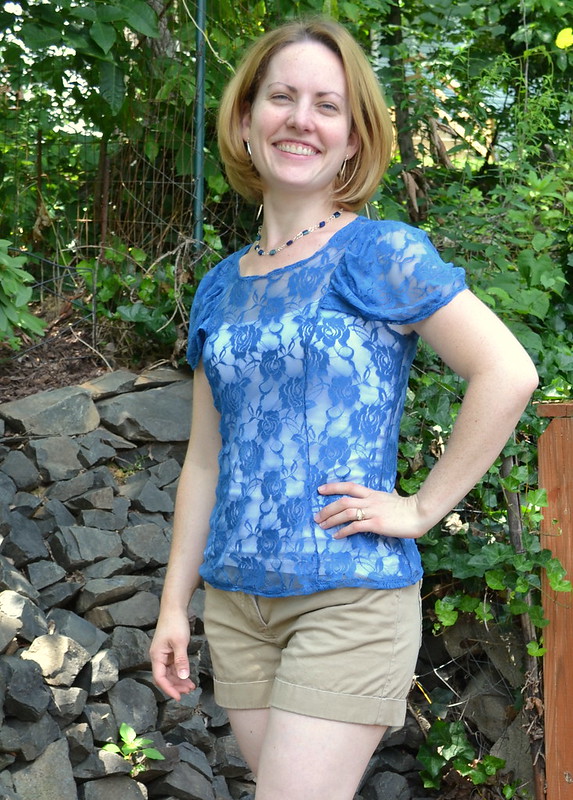 I’ve made a plain khaki pair of Thurlows to wear it with when I’m feeling a little more subtle!

Same design alterations, just a different fabric and instead of a hook and eye I used a front button secured with an anchor button on the inside of the waistband . This is definently a workhorse pair of shorts. I have another pair exactly the same that I’ve worn to death so these are just the replacement.

Three garments, all Sewaholic. I can’t wait for the Tasia to release her next pattern. I AM the Ultimate Sewaholic Fan Girl!

P.S.- Do I get bonus points for having handmade my necklace of sterling silver and lapis? 🙂