I can’t believe Indie Pattern Month is drawing to a close already!  There have been so many fabulous creations posted this month and so many new patterns to bookmark to try!  This time I’m showcasing Sewaholic Patterns.

I’d bought the Gabriola skirt pattern after spotting the most beautiful bird print chiffon from Croft Mill Fabric.  I had great plans for this fabric and Daughter No2 draped herself in it when it arrived!  The grey jersey for the Renfrew is from Croft Mill too, Caroline helped me greatly in chosing the right stuff, so a big thank you there!

The Renfrew tee has been made up by me a number of times now, this will be the fourth for Daughter No2!  I cut the 6 on the shoulders, grading to a 2 at the waist and then out to a 4 at the hip.  I also had to lengthen the shoulder by 2cm.  She didn’t want the waistband part of the tee, so I ran a line of twin-needling 1cm from the raw edge and didn’t turn up a hem.  The Renfrew, as always goes together well, it took  a couple of hours on the overlocker, perfect for a quick make.

The Gabriola however, was a completely different kettle of fish.  The print ran across the fabric, so I thought I’d cut the pattern pieces on the cross grain.  This was not one of my brightest ideas, as it turns out.  It was slippery as heck to cut and even worse to pin together.  I used French seams everywhere except to attach the skirt pieces to the yokes.  There I used a flat fell seam.

I wasn’t sure what to do with the waistband – at first I didn’t want to make it too stiff, but I was concerned that the chiffon wouldn’t be strong enough with just a fine interfacing.  After asking for so ideas from Tashia on twitter which weren’t forthcoming, I decided to start with interfacing with the fine sheer polyester fusible.  I bought a length of white 4cm wide grossgrain ribbon and handstitched the waistband to the ribbon with a herringbone stitch.  This has worked out quite well & now I can be sure it’ll be secure enough with the button & buttonhole too.

Obviously the skirt needed to be lined, but with what..  The more common linings wouldn’t be suitable here, I couldn’t use an acetate or cupro and silk would have been too expensive and not suitable for a teenager to wear every day.  I bought some white cotton muslin for the job, and used it for the toile too.  This I constructed using Mock French seams so that I could alter it quickly and easily if I had to.

The cotton does alter the hang of the chiffon, the skirt would have been far more drapey with a more fluid lining, but Daughter No2 likes it as it is, and I am not unhappy with the result.  I let the skirt hang for a day to see how much dropping there would be and had a pain of a time evening up the hem!  In some places 6-7cm had to come off, and in others it was fine.  I did away with the 2.5cm hem idea too, just using the rolled hem foot, but hemming the lining properly. 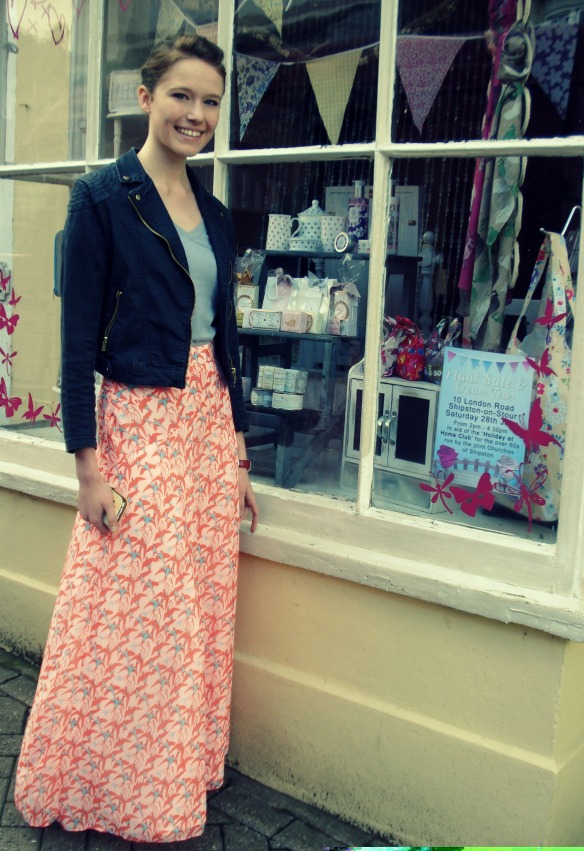 Daughter no2 loves the skirt, it’s so pretty and feminine and she cannot wait to wear it out & show it off to her friends!  I love how it looks with her biker jacket and the grey for the teeshirt has worked so much better than the predictable blue would have.  So that’s it, goodbye Indie Pattern Month, but hello loads more indie patterns for my stash!!  🙂

15 thoughts on “Fly away with me, Sewaholic fan girl”