After my Sew Stretchy May submission a few days ago, I’ve somehow found the energy (with major motivation since I have NOTHING to wear) to make another maternity top from Simplicity 1469, this time in black and white so I can count this as July’s Monosewn challenge as well as April’s Sewing Double challenge. 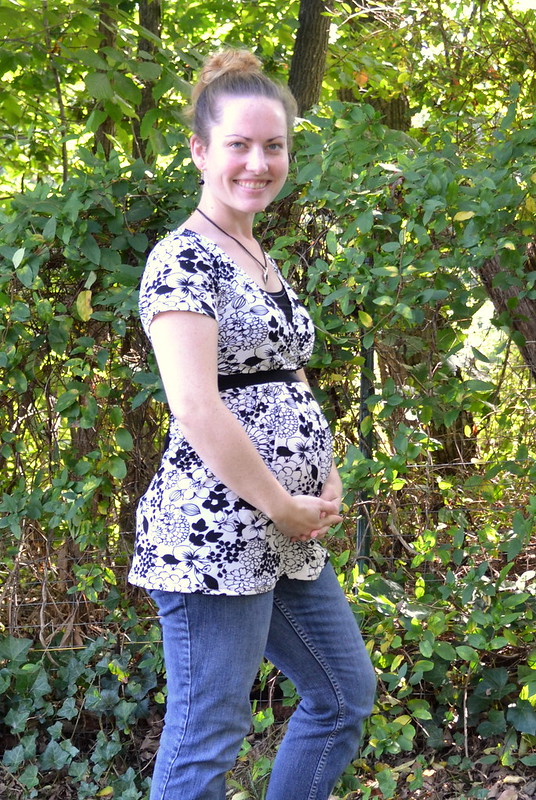 This fabric is a highly synthetic knit that I bought specifically for Monosewn before I knew I was pregnant. I made up my own pattern to – ironically – copy a maternity shirt that I used to own and love, but make it non-maternity. It had an empire waist with a cross-over bodice and black contrast band and ties (very much like this Simplicity pattern). I somehow screwed up my measurements and the top ended up way too short from the shoulder to the bust. I wore it a few times but the band kept riding up over my full bust and just looked ridiculous. I decided to not blog it, in hopes of going back for more fabric to try again. A week later, I located the fabric at the store again, bought enough to totally remake it, and the very next day found out about the little one. I had to set the whole thing aside as I waited and wondered if this baby would make it.

Now that we’ve made it past 14 weeks and this baby seems like a lively one, I figured it was time to turn this fabric into a maternity shirt. I used the same pattern as I did for the first, with a couple adjustments. I went down to the XS size, as the small was too big in the plain white version. This fixed both the width and shoulder-to-bust length problems. I’m a touch concerned about how snug it is across the belly already, though. Good thing this is really stretchy fabric, as I figure I’ll grow at least another 10″ around. 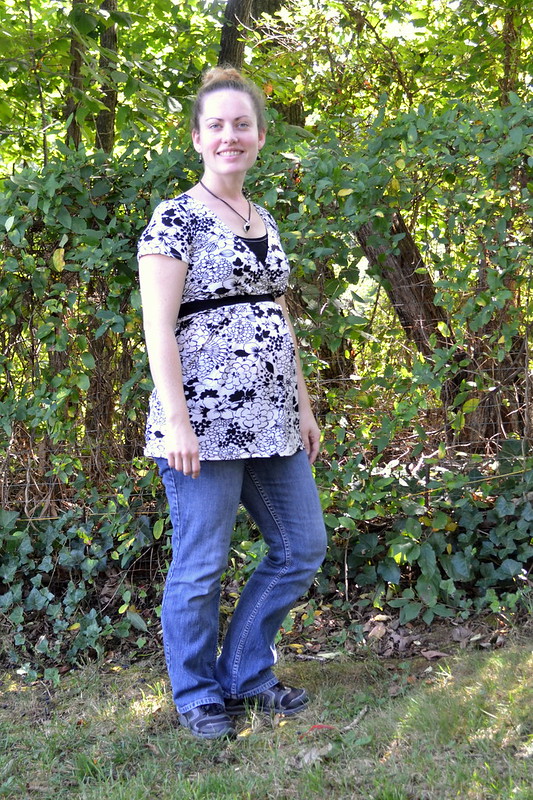 I also added a couple of contrast ties in the side seams at the band, which tie into a sloppy, floppy bow in the back. It’s never very comfy to lean back on a bow, but it’s cute so I’ll sacrifice a little. 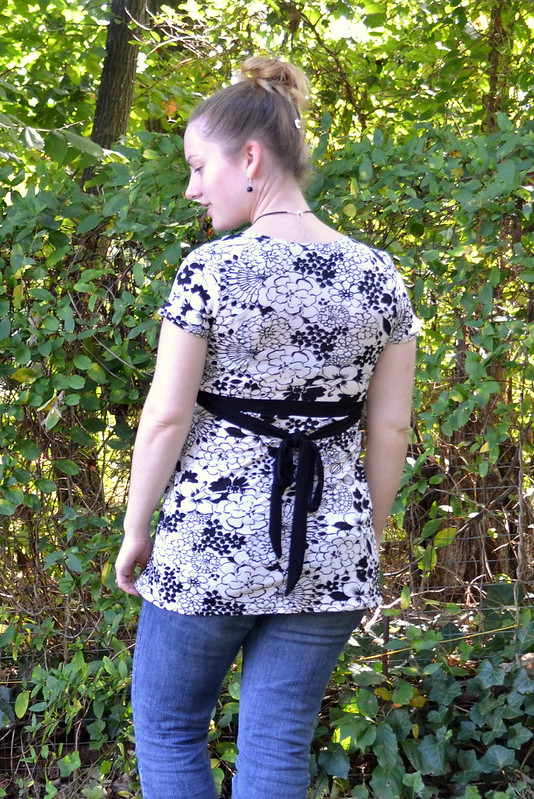 One change from the pattern directions which I made the first time but completely forgot about when I blogged was the inside construction of the band. The pattern calls for a self-lined band but it serves absolutely no function as none of the rest of the blouse is lined and the lining doesn’t even encase the seams. If it were somehow constructed that it encased the seams for a neater finish inside, I’d understand the purpose, but I completely fail to see why the pattern asks you to do this, so I omitted it both times. The first time I followed the order of construction to stitch the side seams from the underarm to the upper bodice before attaching the band or skirt. Since I omitted the band lining, this was pointless. This time around, I waited until all pieces were attached before closing the side seams, just as you would with any other knit top. It was so much easier this way and I’d recommend it to anyone wishing to try this pattern. 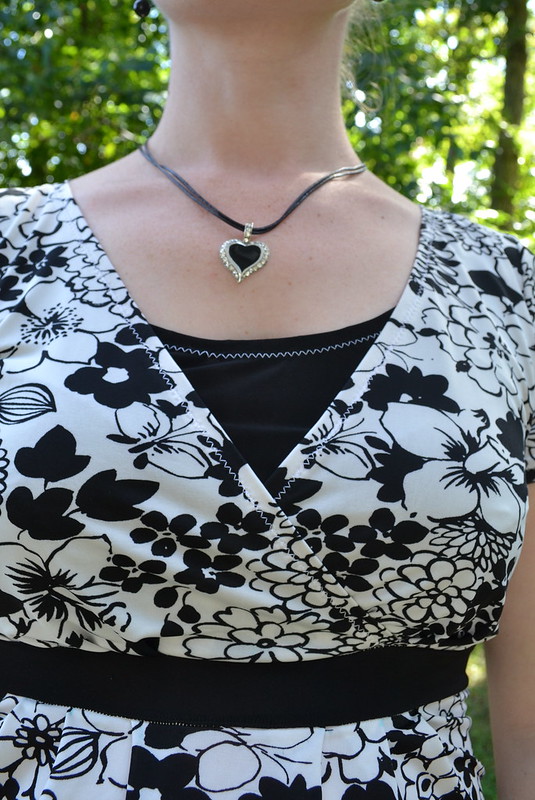 I used the same hemming technique I used on the white version (serging with fusible tricot strips glue side up, then fold & fuse, then stitch). It worked very nicely and there is no way I could have successfully hemmed that curved black contrast underbodice without it.  I love the contrast top stitching on it but it was a ton of work, as I ran out of ball point needles and had to use a sharp. There were a lot of skipped stitches so I had to move very slowly and stop whenever there was a skipped stitch, cut the thread, pull it to the wrong side with a hand needle, tie it off, then start the machine needle again in the exact spot it left off. It was worth it in the end, though.

Oh – and your eyes do not deceive you – the underbodice is a little lopsided. I accidentally cut the upperbodice too close to the edge of the fabric, thus chopping off about a 2/3″ at the shoulder. I figured it was stretchy enough to stretch it into place so I didn’t recut. Turns out that the placement of the underbodice on the messed-up upper means it looks crooked. Oh well, can’t win them all.

So there you have it, my Monosewn Double: 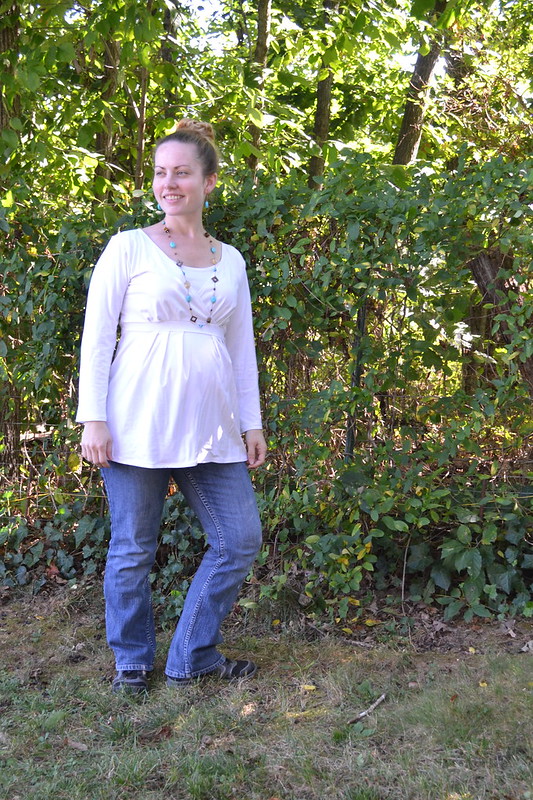