When I first saw this challenge – Inside Out – I was a bit stumped as to what to make, but then March’s edition of the Seamwork  (Colette’s new digital magazine) was released last week which included this gorgeous reversible skirt & I thought ‘bingo’ – I’ve hit the jackpot….. TMS March Challenge here we come!

My skirt was made up of 3 difference fabrics.  On one side I used a reversible poly/viscose coating fabric which is so soft, it really would make an amazing coat.  I bought it in August 2013 whilst on holiday in Cornwall (UK) from Truro Fabrics initially to make a poncho, but never got round to it as it was too nice! I did use some to make a skirt, but only wore it once as the fit was terrible.

I was looking on their website the other day and they still have it in (and also in green!!??)  at £10 a metre if anyone’s interested.

This is one of the side seams – I also reversed the top and bottom and the back!

The construction went amazing well, I added extra top stitching – the instructions only called for edge stitching, but I got a bit carried away!

With one side completed I went onto the other side.  I chose 2 pieces of wool and that went together really well too.  I’ve never sewn with 100% wood before, it really was amazing – it behaved and pressed like a dream.   But then disaster struck!  I made this side exactly the same as the first side when in case it should have been a mirror image.  You can read about the disaster on my blog here, but this post is just about the good bits!

Not to be deterred I slept on it and the next day I had a rummage in my stash and found this amazing bubble speech fabric and some grey ribbed ponte knit.  This really is a better choice than my original plan as it will now be washable – the first version I planned to make would have ended up being dry clean only due to the wool.

This is the first time I’ve ever made anything reversible and it was so easy! the pattern stated less than 3 hours.  For me it was less than 3 days! Maybe if I hadn’t made 2 sides identical I could have gotten it done in the day, but I took my time and added more stitching than was called for, and I spent ages pressing to get the edges really neat.

A couple of things to remember if you decide to make this or something similar…. Before I sewed the top seam at the waist I pressed the other 3 seams open, and when I stitched the top seam I left the hole big enough to fit my clapper in to make the presser of the top seam easier.  When I then did a final press on the right side it was super easy! 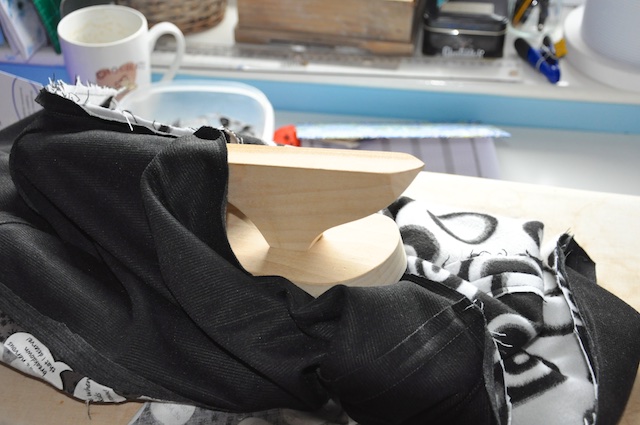 So now I’ll show you the inners. Oh no I can’t – but I can show you the 2 outsides, which if I don’t mind saying so myself, include some of the best topstitching I’ve ever done!  Thanks to my new Janome!!

Tiny wobble here on the corner, but the fab button hole outweighs any slight wobble!

And the cat Rory!  Why is it that cat’s just want to get in on the action! 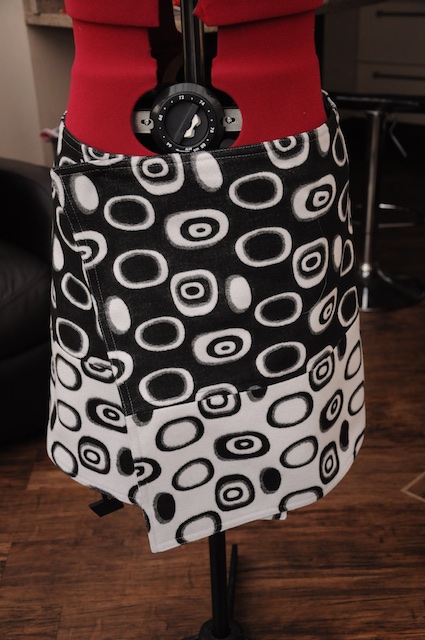 The skirt looked better on Gertrude than me ( for the benefit of showing you guys!).  i am happy with the fit but with a tripod and a timer in your hand it’s not alway easy to get a good photo!

The speech bubble side is my favourite at the minute! It would definitely be a bit of an ice breaker at a party!

I know I’ll definitely be making more of these – maybe not exactly the same shape, but more wrap skirts – they’re so easy to make – no hemming!! That’s always a bonus.  I play a lot of golf in the summer so they’ll be great for after golf to turn it the other way round, change my top, and hey presto a whole new outfit!

If you want to pop over to my blog over at Thimberlina it would be great to see you, and it you left me a comment then that would be fab too! Tx

22 thoughts on “The Reversible Osaka Skirt”