This summer marks the first time that I’m actually working in an office. Let’s ignore the fact that I’m one level above an intern, and that I’m not entirely required to always be there, and also that it’s a very casual office.

Because its summer, I can barely bring myself to wear pants. I’m not a formal pants person anyway, but especially not when the temperature is above 80*F. 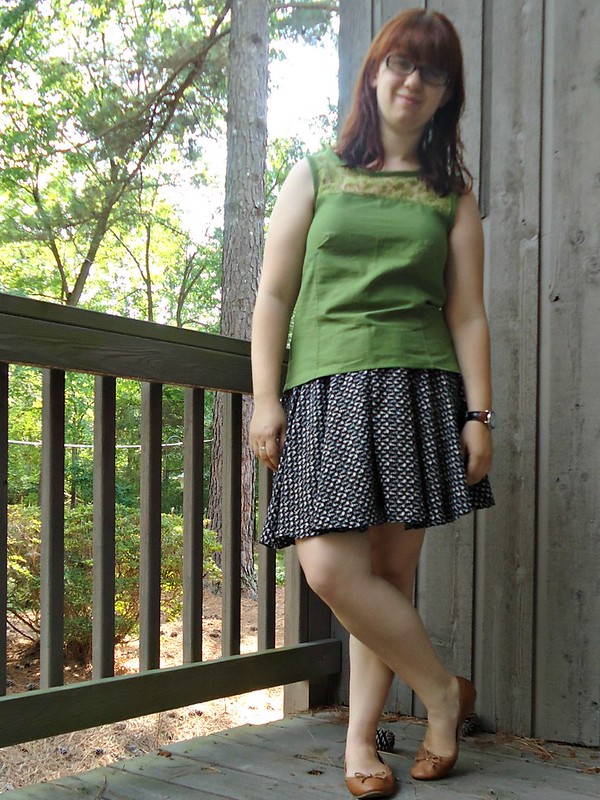 So skirts. But its also windy. Quite windy, so that takes out skirts. What’s a girl to do? Wear culottes!

But I also don’t like to tuck tops in a lot. I’m a big fan of the slouchy t-shirt look, but for business casual type looks, a t-shirt doesn’t always work. So I pulled out my trusty Dandelion Top/Dress pattern. This was the perfect time period for the Separates Challenge

So this is my attempt at a survival mode businessy outfit. (Let it be known that I live in a lovely bubble that thinks this is businessy.)

I started with the Tania Culottes from Megan Nielsen. The size I measured for was a large, which was great for every part except the waistband. But I’ll get to that. I also cut the extra large length, which seems to be the norm for anyone who doesn’t want a true miniskirt. 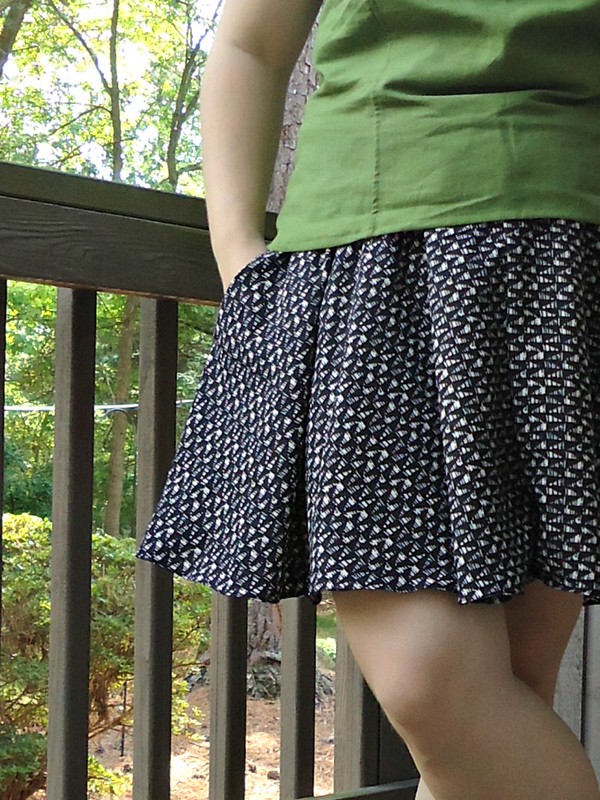 Last month I made it up in linen, actually the same linen that I made the top from. I got this lovely and odd triangle fabric from Joann’s. It was so flowy and nice, destined to be some Tania’s. Because I had made them up before, I already knew that one of my alterations had to be shortening the crotch seam. I think I took about a half an inch from the pattern, which translated into about an inch in general. I find that it doesn’t ruin the illusion, and that means that the size large doesn’t cause thigh rubbing within the garment. I’ve gotten used to it outside shorts, but not inside. I also added an inseam pocket. Because that’s definitely a requirement for me. Other than that I made it up as suggested, and I made the lining out of the same fabric. It does add quite the volume, but that’s only weird at the shorts part.

Once I had finished everything except the hem, I realized that the waistband made me feel like a fuddy duddy. It worked on the last pair, mostly because the linen was stiff enough, but the top of the waistband doesn’t curve in, and my body really does. For this pair, I cut the waistband about in half, and then used some of my vintage bias tape to fold the top to the inside. You can just barely see the green bias tape on the inside in the picture below. I used a normal zipper, since I didn’t have an appropriately colored invisible one available. I think it’s a nine inch, but I only opened the seam about 5 inches, since I don’t need much more. 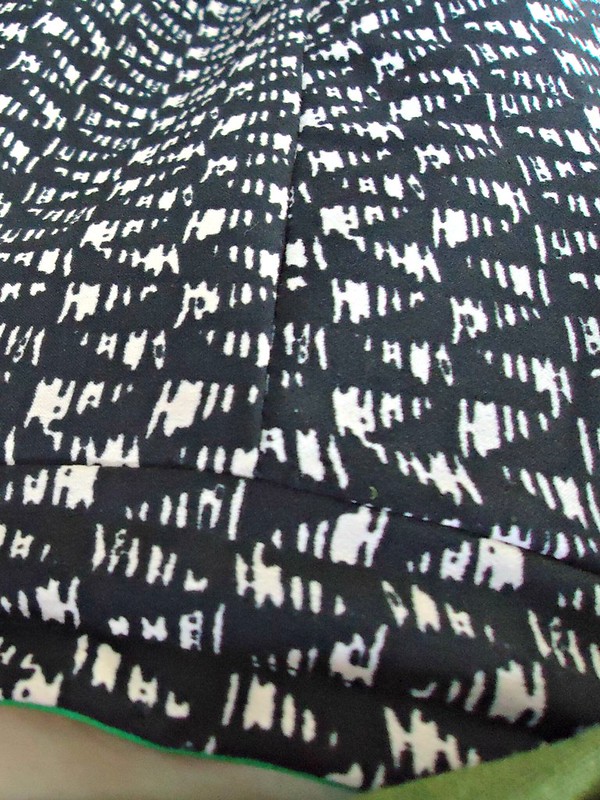 Also, this was the first time I even tried to pattern match. And I succeeded in at least making the pattern go straight across! I hemmed these with my rolled hem foot, which for my third time using it, I think it’s okay. This was the first time that I ever caught the bias drooping on my fabric. After years of working with mostly stiff fabric, I had never experienced the fabric drooping, no matter how long I’d let a skirt hang. But this time it did, and I just wanted to get it to hang straight, so I did some hacking. There’s one or two places where the lining is about level with the outer fabric, but overall the lining is shorter, like its supposed to be. For the first time working with this problem I think I did okay! 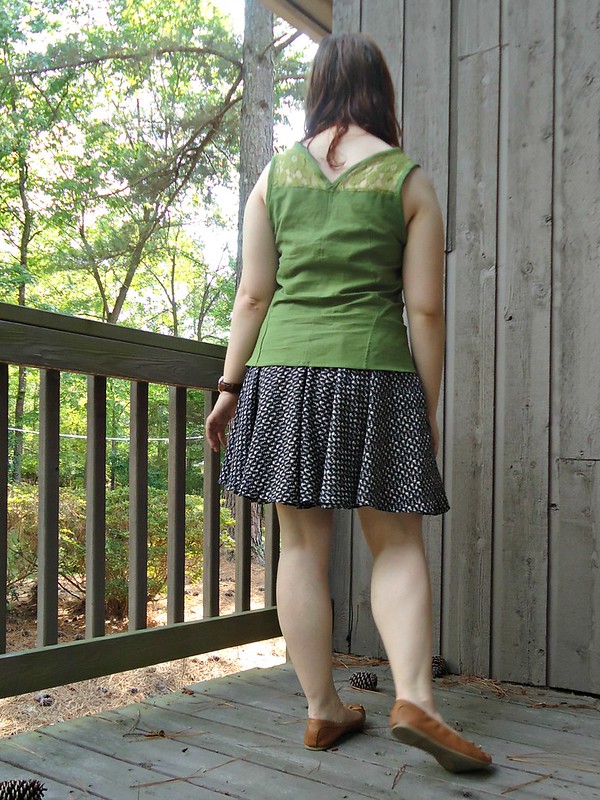 I really like these culottes. I never was much into skirts throughout high school and college, but when I started tutoring “kids” who were only two or three years younger than me, I started trying to dress at least a little older, and or in dresses/skirts since all my students wear sweats, and these would certainly add to that part of my wardrobe. And I wouldn’t have to worry about wind. Which is ideal.

And then the top. This is the Dandelion Dress/Top which is from Seamster Patterns #1401. I’ve made the dress before, and I love it, but I figured a new woven top would be good too. The fabric is a linen from Joann’s, which I had used to make a set of Tania culottes, but I had some extra yardage and squeezed out this top! The lace was given to me by my mom when a friend’s home ec program was closed. I’ve also got some in orange and black, and I’m still not sure what to do with it all! 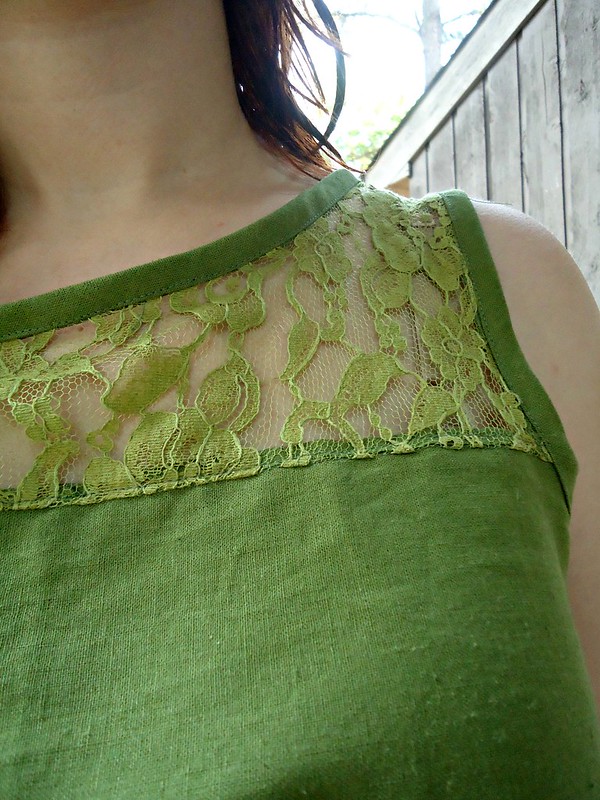 Anyways. I started with the medium, and I did have to make a lot of changes to the top. I changed the back neckline to a v instead of a round neck, mostly so I wouldn’t have to insert a zipper, since that was not likely to happen. I appreciate zippers for their service, but I try to avoid them if possible. I did kinda flat felled seams for as much as possible, since the linen was fraying like mad. I took up the shoulders an inch, and I may have to take it up more. I had to take in the side seams at the armscye. When that still wasn’t enough to combat armscye gaping, and bra showing for that matter, I took a wedge shaped dart in of the lace. It’s still not perfect, but I decided to use the bias tape I made from the linen to finish it anyway. I’m definitely thinking that a strapless bra will have to be used, at least until I figure out how to fix it.

And I love it! It’s snug where necessary and loose otherwise, and it’s comfy. I changed into pajama bottoms just now, but the top is comfy enough that I could probably wear it to bed, if that wouldn’t be weird. Once I decide if/how to fix the lace yoke, I can definitely see this becoming an all summer every week kind of top.

I’ve made both of these patterns before, and I’d definitely recommend them. The Tania’s are so comfy, and the Dandelion is so unique, and they will be made and worn by me for years to come! 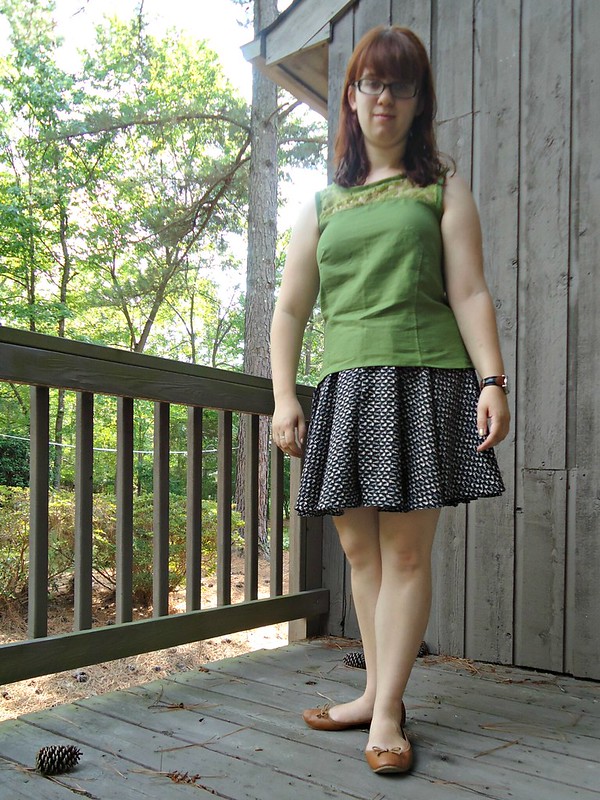 The first wearings came today when I got pictures at my old apartment, since I’m showing it off while my former roommate is out of town, and I took a quick stop at the grocery store. I’m definitely wearing the culottes to a swing dancing event tomorrow, and probably (provided the wash gets done this weekend) the top will get worn again on Monday!

So those are my heat survival mode separates! Hope you’ve enjoyed my ramblings!

If you’d like to read more ramblings on the subject, or take a look at other things I’ve been doing, here’s a link to my blog!