Every time Closet Case Files puts out a new pattern I’m all ‘Want, want, want!’ but for no explicable reason I’ve yet to try any of Heather Lou’s patterns – until these Ginger Jeans.  Here is my entry for the ‘New to me’ competition.  I’ve been through a lot of muslins (ok, maybe not a thousand) and I’m mostly happy with how these have turned out.  To be honest, if I tried them on in a shop I’d probably put them back on the shelf while I went and had a coffee to think about it and then end up not returning to purchase them.  As they are, they are really comfortable and will be a good busy day, throw on item.  There are still some alterations I want to make but I’ll list these later with the details of my personal fit changes. 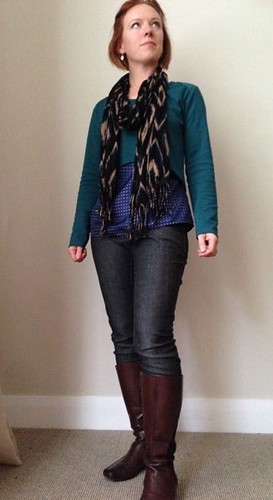 (I am bemused by the giant butt looming over my head) 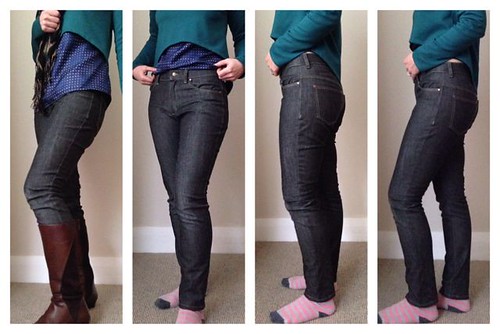 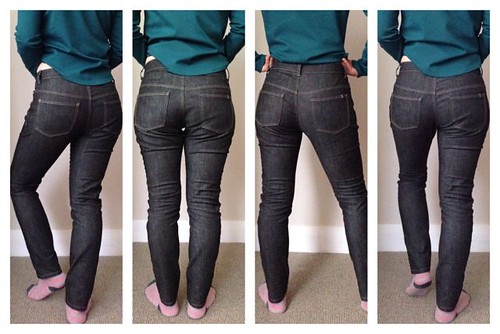 Pattern: I choose to do the high waisted, skinny legged View B.  Again, I printed off the pdf and HOLY MOLY this pattern went together easy-peasy, piece of pie.  The logical numbering system meant that the pages just flew together and the neat way that the pattern is separated into two means that you don’t have to join together the centre row of pages, therefore no cutting the margins on that part, making it nice and quick!  Best pdf I’ve put together, ever.

Thats about where the easiness ended though….

Size: My measurements put me at a size 6 at the waist and size 10 at the hip.  I found grading trousers was not easy, like say, grading a t’shirt from bust to waist is.  For the front, I had the pocket facing, pocket lining and coin pocket that all had to be involved and then I could not figure out where along the crotch curve I should start to change sizes.  I managed to trace out my best guess.  I also shortened the leg along the shorten/lengthen lines by 8cm.

Fabric: It’s just some basic denim.  I’m not sure how well it will wear.  It’s very marginally below the 20% stretch recommend in the pattern.  My aim for these Gingers/fabric was to create a wearable muslin.

Cutting/Sewing: I just completely followed the Ginger jeans sew-a-long and it was awesome.  Great photos and enjoyable to read text.  The fly front especially (I’ve done a few before but not so many that I don’t need instructing) came together before I knew it and is easily the tidiest fly front I’ve sewn.  I used my overlocker and didn’t do flat felled seams.  I used a gold topstitching thread and a jeans needle and had no problems with sewing up the thicker material. 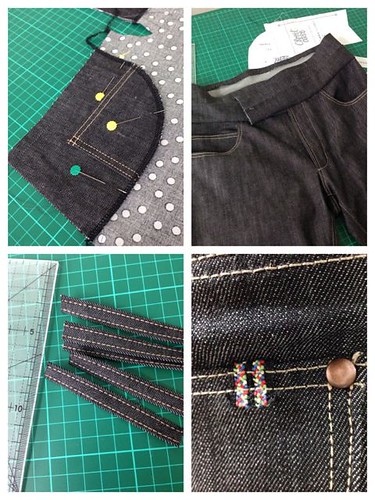 I would recommend this pattern.  Just cross your fingers that you are one of those people (and there seem to be lots out there) that this pattern fits either out of the envelope or without too much adjusting.  I do not fit into that group – nope.

Here are my personal pattern changes, in case they are of use to anyone else.  I should say that I have never read a book on fitting and have never had to fit anything before so in all likeliness I went about this all back to front and upside down. 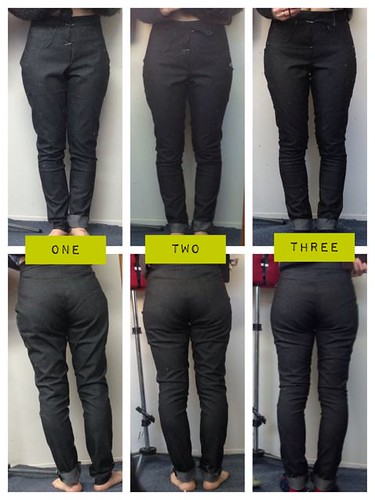 Muslin One – Starting Point: size as per measurements (6 waist to 10 hip/legs) – Observations: ‘Ha,ha what a crack up.’  Way too big.  Changes to make: size 6 waist to 8 hip/leg

= Muslin Two – Observations: Still too big? Under butt wrinkles and baggy front crotch.  Changes to make: size 6 from waist to knee, size 8 knee down. Straighten out back crotch slightly.

= Muslin Three – Observations: Still under butt wrinkles and baggy front crotch. (Posted in Facebook group for feedback)  Changes to make: ease back inseam from knee to crotch making the back 10mm shorter than the front, straighten front crotch slightly. 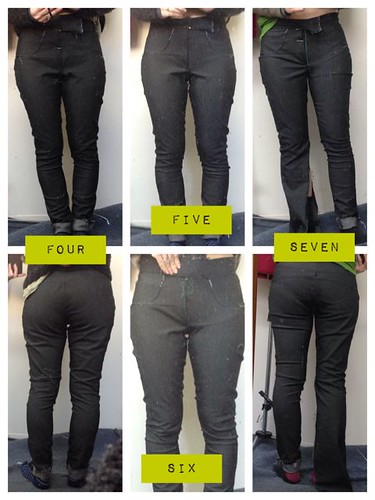 = Muslin Four – Observations: Baggy front crotch, still too many wrinkles under butt.  Changes to make: Shorten by 1cm at front lengthen and shorten lines just below pocket (on right side only.)

= Muslin Five – Observations: Front improving, back still baggy.  Changes to make: Shorten by 1cm at back lengthen and shorten lines, pinch out a curved dart at front from base of crotch up to pocket (on left side only).

= Muslin Seven – Observations: Front is now fine, back is still a bit too wrinkly.  Changes to make: Change the horizontal dart at the top of thigh to run from 2cm inner front to 3cm on side (rather than 0cm) to 4cm inner back.  Back length is shorter so is stretched to fit front.

= Muslin Eight – I transferred all my changes onto the pattern piece and then this became the wearable muslin. 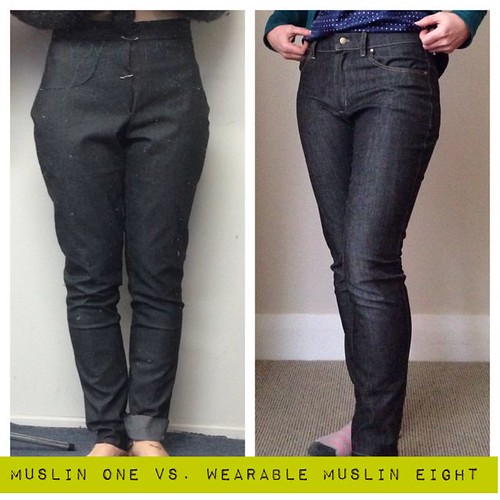 Changes I still want to make after competing my wearable muslin:

If anyone has managed to read this far and wants to offer feedback on any fit alterations they are most welcome to!  Thanks!

P.S. I can’t believe I just put this many butt photos on the internet.

29 thoughts on “Gingers (of a thousand muslins)”