This week I’ve got a make that is very unseasonable. When I got back from the farmer’s market this morning, it was 87*.  At 11AM. And yet, I made a nice warm sweater. If only I had a reason to cross hemispheres… 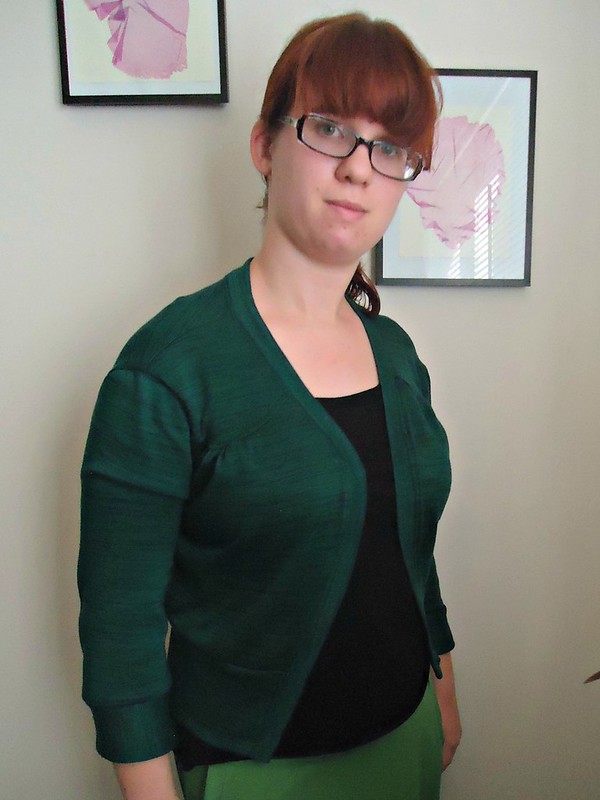 I have been eyeing the Jenna cardigan since it came out, but so far in my sewing career I’ve made my own patterns for  cardigans, or using free tutorials for drafting them…

Two things happened after that. For one, I really messed up on a cardigan out of this plum fabric, which I think I have enough fabric left to make a Jenna. The sleeves were as tight as gloves, and I don’t think they made it over my sizeable biceps (strengthened by cookies and the like). And secondly I refashioned a RTW sweater to have pretty much the same proportions as Jenna, and I love it and want it in all colors!

I had 2 meters of this lovely blue-green and black striped sweater knit. And its definitely polyester, but much too gorgeous for me to pass over. Want to know how I know its polyester? 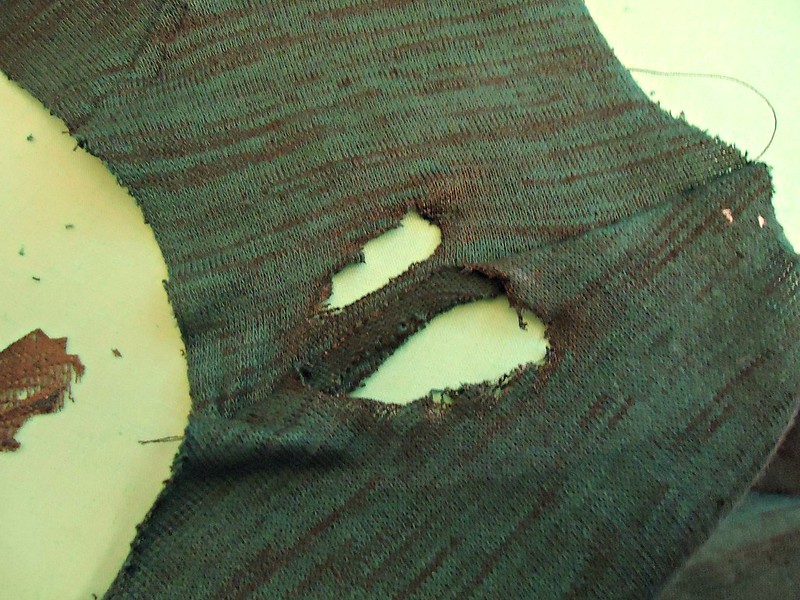 This is honestly the first time that I’ve ever melted fabric, though my mom would disagree with that. So I of course freaked out, unplugged the iron, and decided to get new one. A few hours later I decided to research it on the interwebs, which told me I could just scrape it off… So I did and I moved on.

The pdf pattern came together quickly, and altogether, the cutting and sewing would have taken about 3 hours… But with my little mishap up above, it added an extra hour. Half for panic, and half for the actual fixing. I sewed up the size 36, since that is (reasonably) closest to my bust size, but it ended up being too loose in the waist, which brought about some on the fly fixes. I loved the view with the gathers, so that was my choice! 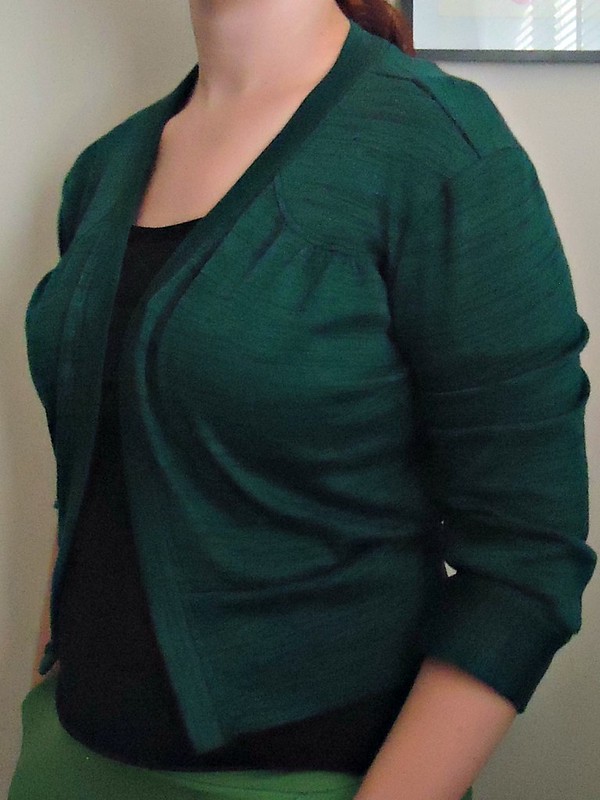 I did alter the pattern a bit, though. I don’t often button up cardigans, and when Gillian at Crafting a Rainbow pointed out that Jenna is really meant to be buttoned, that got me thinking that my favorite cardigans with buttons all have that rounded v-neck look, and I wanted to emulate that, so I drew out a small curve below the gathering on the front piece. I also connected the neckbands and buttonbands, widened to the width of the buttonband all around. This led to some… creative license with the directions at that point. I also had to cut a new half a back piece in order to make up for my ironing mistake and still possibly be able to make a shirt out of the leftovers. I cut a piece and allowed for seam allowance, and then sewed the pieces together. 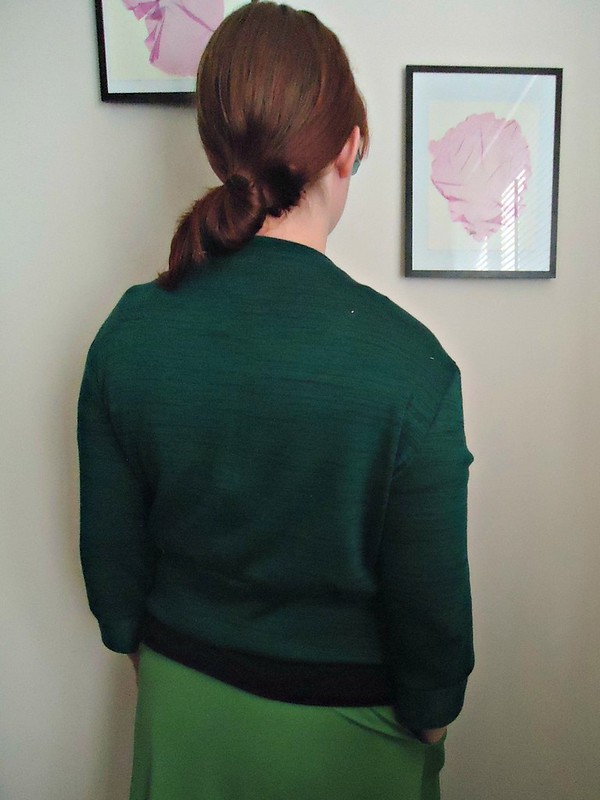 To fix the gaps in the waist, I tapered the side seams a little, and then stretched the hem band to make that pretty snug. The one thing I’m not sure about is buttons. I don’t wear cardigans closed much, but I need to decide if I’m going to follow through and put them on, or leave it as is. I do have a couple of months to decide, until I’ll actually be able  to wear it on a normal basis!

I’m definitely going to make this pattern again, though I see from looking through the pictures that the shoulders are dropping off a bit, so I’ll probably have to fix that next time. I will also have to shorten the sleeves a bit, if I make the cropped sleeves again. I roll things up to my elbows too much. Maybe I’ll make the pattern as drafted next time too… Planning… And a season change. Both should happen first. 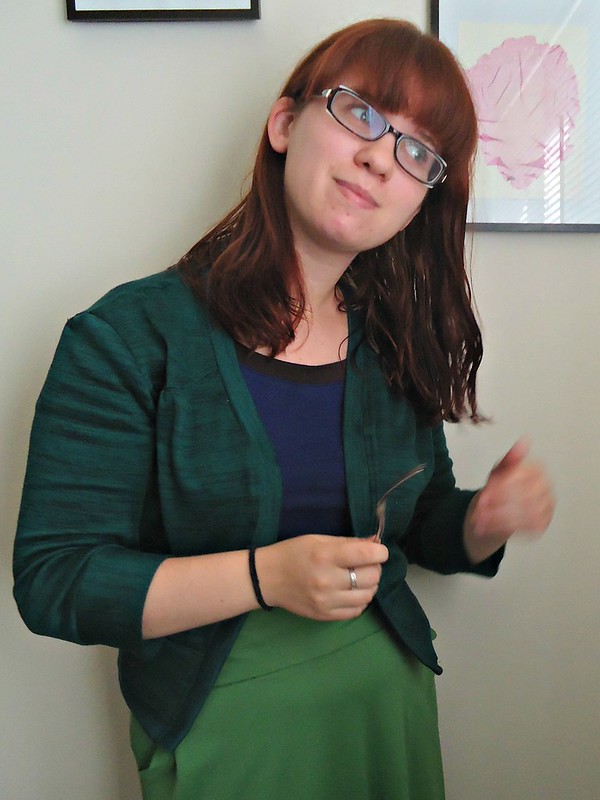 My favorite thing that I realized is that this’ll make a fantastic coverup to any Little Mermaid Disneybound/subtle cosplay that I ever want to pursue. Purple shirt for the shells, green skirt for the tail, and this for the sea and warmth! Plus, I’ve got the framed seaweed for the pictures! 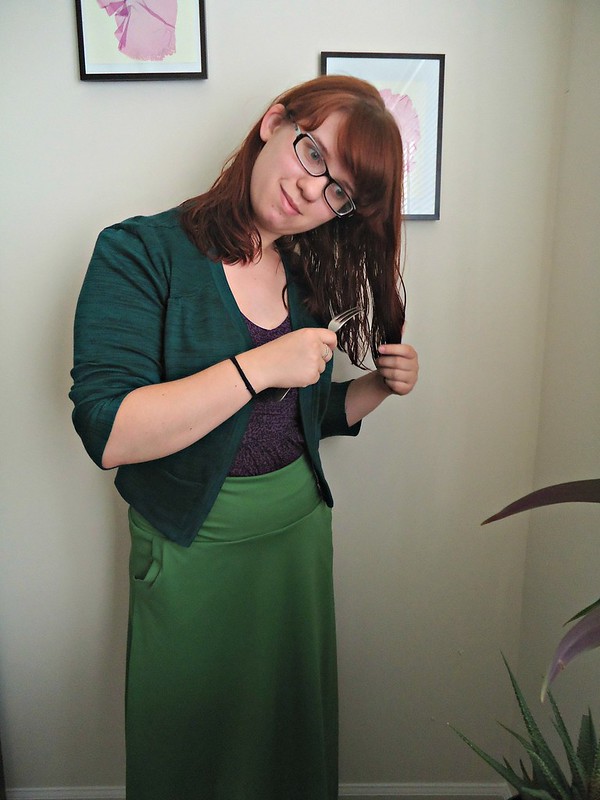 Disclaimers: No dinglehoppers/forks were hurt or used to comb hair in the taking of these pictures.

If you want to take a peek at my blog, you can find it here!

10 thoughts on “Under the Sea”