A few of you wanted to know how the judges got on with their goals, so today, let’s find out! 🙂 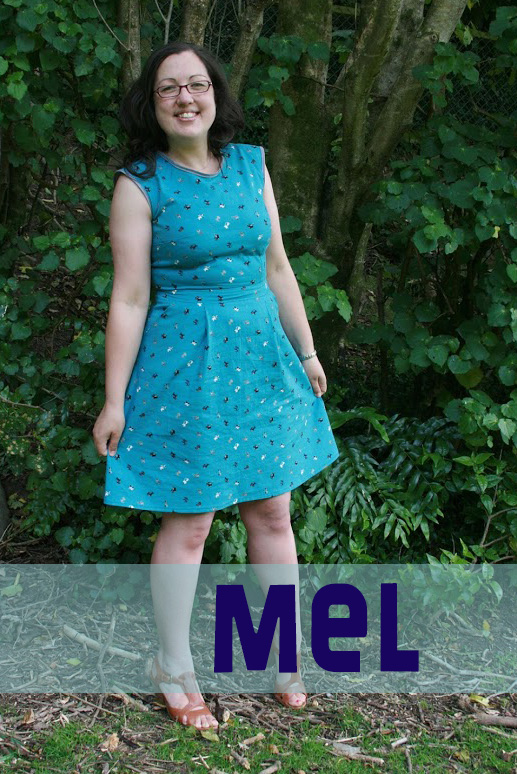 At the start of Indie Pattern Month, Mel was hoping to make up one or two (or possibly even more!) of the following:

So Mel, how did you go? Did you get any of them done? Or did you throw your plans out the window and make up other indie patterns instead?

Mel: Err….well, yes…and no 😉 You would have seen my Papercut Clover dress earlier in the month but I also finished the Miette skirt that I cut out for “Put a Bird On It” and since it’s Indie I figure it can count too right? Right?!

So nothing from the list and only two finished items but I found Indie Pattern Month hugely inspiring. Judging all your amazing garments was a huge job but seeing your hard work made it worth it.

Near the end of the month I decided to wrangle my Works In Progress list and reorganised my sewing queue, adding a few new Indie patterns to it.

Two of these are even in that list (Lady Skater and Gillian) and I also made progress on my Watson and Davie dress.

As you can see some of them are still works in progress, because that’s how I roll, but they are going to be fabulous and it’s all thanks to your inspirational posts – Keep it up guys, you make TMS awesome!

Kat had a few projects on her things-to-sew list. Here’s what she started out planning/hoping to make:

So Kat, tell us – what did you actually end up making during Indie Pattern Month? Anything from that list?

Kat: Gosh, I actually thought I had done a terrible job of getting through my Indie Pattern Month plans, but now that I’m looking at that list again, I’ve made a lot more of them than I thought! So that’s a rather nice discovery. 😉

I made the Melissa dress, in a gorgeous polka dotted chambray. And I even got it up on the Monthly Stitch blog during June – win!

The Carolyn pajama pants were also made. And I finally got photos of them and added them to my blog the other day – yay! (It’s a lovely pattern, by the way. I only made the pants from it, but they’re nice and comfy and a good cut. I now have plans (and fabric!) to make more.)

The Hawthorn dress is also made – yay! And you’ll be seeing it over here on The Monthly Stitch very soon, as it ended up being part of my plans for the August challenge theme instead. (Yes, I admit it – I didn’t get it made during June…..)

The Sigma dress didn’t happen. 😦 But I did make two other garments from indie patterns for the friend who the Sigma dress is going to be for! I made the cropped sweater version of the Undercover Hood from Papercut patterns in a delicious soft grey double knit merino, and the Bonnie sweater from Bluegingerdoll in a black with big green spots. Neither are blogged yet – every time we’ve caught up to get photos the daylight hours have conspired against us. Soon this will happen though! Soooon!)

The Jenna cardi also hasn’t happened. However, I finally found some buttons for it last weekend, so it’s getting a lot closer to being made! Yay! (Wonder if I can find a way to make it as part of the August challenge…. Hmmm…..)

So yes – lots of sewing, not so much blogging! 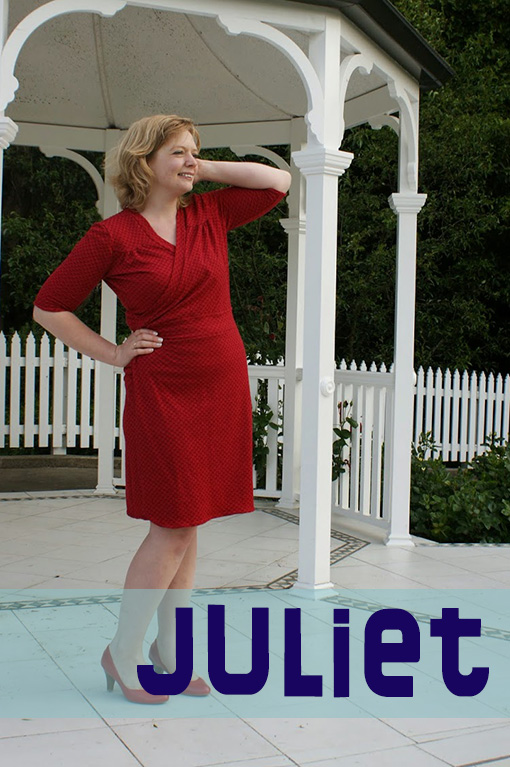 Juliet was a little bit more sneaky – she didn’t actually tell us what she was planning to make during Indie Pattern Month, which means we can’t hold up a list and ask her how it went! (Note to self: learn from this! 😉

However, she was planning on doing some sewing with indie patterns during the month.

So tell us, Juliet – what did you make? And what indie pattern will you be making next?

Haha, there was a reason for my sneaky – I had no sewjo! There’s nothing worse than making plans public and then failing at them. But Indie Pattern Month coincided with my sewjo rising, as well as my realisation that comes at the start of every winter, when I discover that I have nothing to wear for the long, cold months ahead.

I started simple, and made some merino tonic tee’s by indie designer Skinny Bitch, Curvy Chick. These were basics: warm underclothes to layer up the warmth and lurk under everything else unseen. Correspondingly, they are plain and boring and unbloggable – two greys and a black one, and not likely to be seen by anyone other than myself or my flatmate when I’m slovenly or when we’re sewing together. It was, despite the absolute lack of glamour, enough to fire me up and make me recall that sewing is fun, that it’s not always long and complicated, and that it fulfils a need very well.

Sewjo recovered, I went on to make a Gillian dress from Muse Patterns. This time I made it in a peacock blue, double layered for warmth and the pride of my winter wardrobe so far. The colour sings and Gillian is a pattern that is not only versatile, but very hackable too – I changed the bodice to remove the yoke and it was a breeze. I love both of my Gillian dresses now, and I’m not saying that because Kat is my friend either, but because it’s well drafted, beautifully thought out and has adorable design details that I love.

It took a bit of courage to cut into my next IPM make: some beautiful, thick raspberry merino that I’ve been petting for the past year. Initially I had planned to make a Cake Patterns Carmine, but then youngseamstress came along and ruined those plans* with her heart-stoppingly perfect Natalie Dress. So I made a Muse Natalie as well! I haven’t blogged it yet (winter daylight is short, and I travel up and down the country every weekend, making photo ops difficult to come by) but I LOVES IT. I do wish I had done the waist gathers in my version, but oh boy, I love wearing this on a gloomy day.

I had just enough time and raspberry merino fabric left for me to cut another SBCC tonic tee, with long sleeves and a deep cowl neckline. I love the look of these necklines, and they are also super-easy: a big rectangle, sewn around the neckline to drape over the shoulders. It’s a great staple and I’m so pleased that something as simple as a basic knit top could re-awake the sewing demon in me. Both my Gillian dress and the raspberry tonic were blogged here.

In the coming weeks I’m aiming to get stuck into a second Pavot jacket, hacked as a blazer, and the Cake Carmine shrug too. They’re both really good patterns that’ll help me in my war against the cold, but you know what? My stash is totally failing to inspire me and I think I need to go fabric shopping first!!

*Seriously, you guys inspired me with every. single. blog. post. I think you’re amazing and I want to steal your wardrobes 🙂 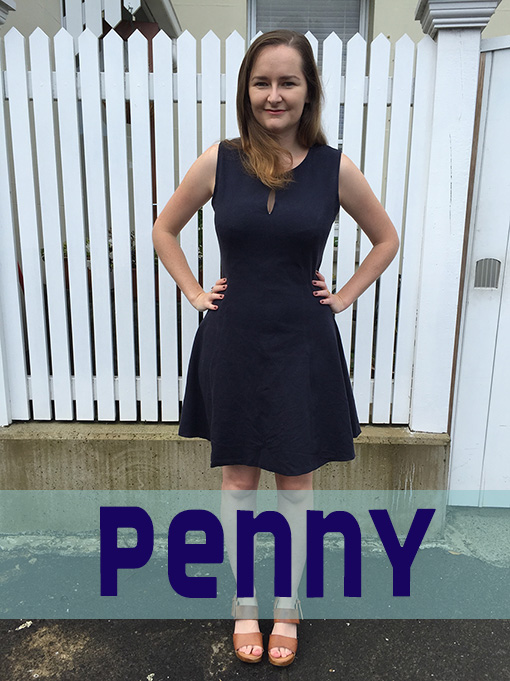 Penny gave us a list of what she was wanting to make too. Again, some rather ambitious plans! Here’s what her list looked like at the start of June:

How did it all go, Penny? Did you finally get that Inari hemmed? Or did you get tempted away by other indie patterns instead?

Penny: Yes certainly ambitious! But I do like to aim high 🙂 let’s start with the positive – I did hem my Inari dress and its a firm favourite of mine. I sewed it in a navy and white silk. It’s comfortable and the fabric means it’s just a bit fancy. I managed to make a second Davie dress, this time in grey. However I made things a little complicated for myself by choosing to bind the neck and arms with black peach skin. This was quite fiddly to do but I think the look was worth it. After the disappointment of making my first alder (much too small) I was apprehensive but determined to make another. It is all cut but only half sewn… The Morris (no progress) and the Kim dress (bodice muslin’d) are still on my list of lovely patterns to make!

Whilst I didn’t manage to tick many of my patterns off the list I did make another Georgia dress. I do love this pattern and it’s the best thing ever when you can just whip up a dress and it fits perfectly!
I love seeing everyone’s indie makes and it was such a privilege to judge each week – thank you for letting me be part of it!

So that’s how our judges went with their Indie Pattern Month goals! How about you? Did you stick to your plan, or get distracted by other shiny pattern goodies? We’d love to find out, tell us below! 🙂

One thought on “How did the judges go?”