I’ll be honest… I’m a little embarrassed to share this one. But at the same time, it’s the first time I actually have something to show for a challenge here in awhile, so I kind of feel like I should roll with it.

I was so excited to hear this month’s theme of a garment inspired by a favorite beverage, and instantly knew that mine just had to be tea. But I already have a dress with a tea-inspired print, so I didn’t really feel like I needed two of those. (Especially since I’m all about making things with a flexible fit right now, while nursing and sloooowly losing baby weight.) What I do need is comfortable-but-cute things to wear around the house, so tea-dye and pajamas sounded like just the thing! 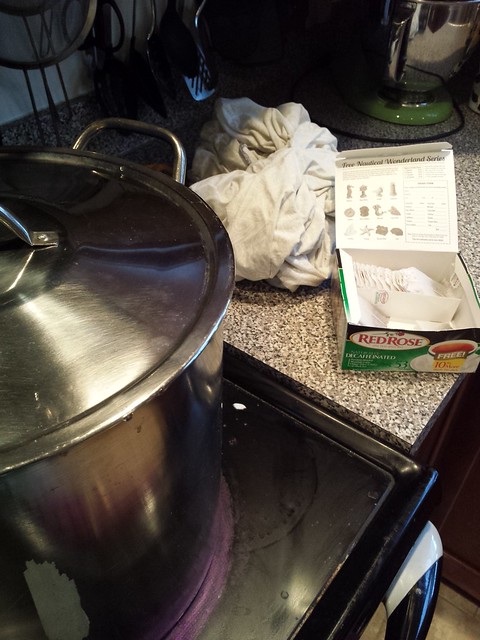 So I got out a tone-on-tone white print from the stash, which I’m pretty sure is a cotton-poly bedsheet, a half-finished white tee from my refashion box, and a box of tea (that I wouldn’t actually drink), and went for it.

And ended up with a lightly dyed white shirt, and a piece of fabric that looked exactly the same as before, despite the assumed cotton content. Rats. But I decided to go on with it anyway.

The pajama pants are Sewaholic Tofinos, which I’ve made once before and was certain they’d fit without any changes, since my older pair started fitting again fairly quickly after my pregnancy was over. Since the tea dye didn’t take as well as I’d hoped, I used a small piece of solid brown from my stash to at least get some brown in there for the piping and waist ties. But I still wasn’t entirely happy with how it was looking, so once I was done the machine sewing, I decided to dye it with some chocolate brown. 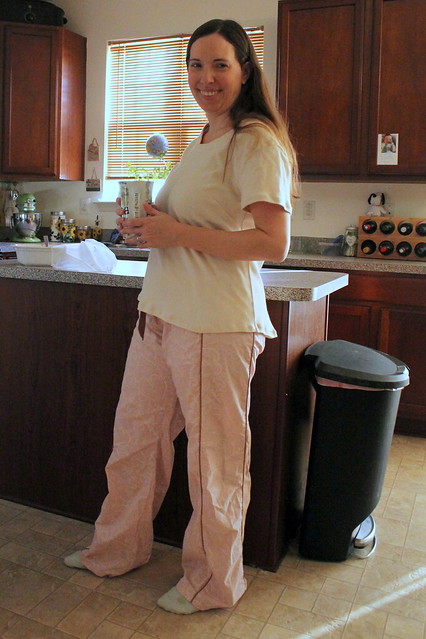 What I ended up with, oddly, was a pastel pink. Which is one of my least favorite colors to wear, and not very tea-like at all. But then I remembered that I have a small tin of a particular tea that I brought back with me from Paris in 2014, which is still around since I ended up not being able to stomach tea for most of my pregnancy. It’s black tea flavored with strawberries, raspberries, currants and cherries. So if that can’t tie pink and tea together, aside from delicious little pastries, what can? I think I will need to go back and hem the pants a little shorter, but I’m much happier with them now that I have a way to justify the pink in my head. I’m weird like that. 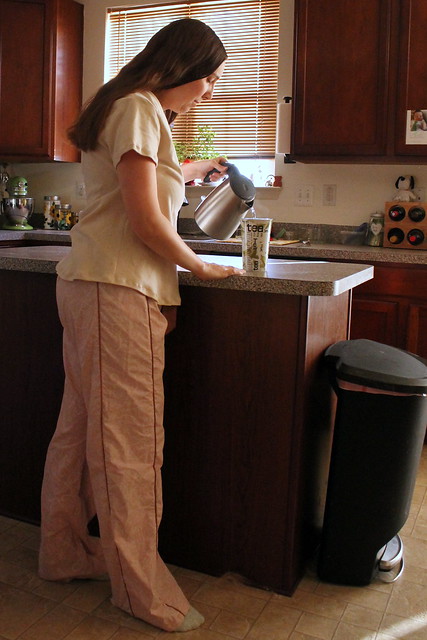 To be honest, I don’t really know much about the shirt. It’s one that my mom started, decided she wasn’t happy with how it was shaping up, and gave it to me to reconstruct. So I have no idea what pattern it was. I did end up taking the side seams in a little more, because the shoulders were seriously dropped. If the side seams hadn’t already been sewn, I probably would have re-cut this with another pattern. It’s pretty frumpy, IMO. But since it’s just to wear for sleeping, I just finished the hems off with a zig zag and decided to roll with it. At least I’ll have no problem nursing in this tee.

So, yeah, not my best showing here ever. Hopefully I’ll be able to show better next time!

6 thoughts on “not exactly my cup of tea”