Sorry I’m late! I’ve been working on this project specifically for April’s challenge and have spent half of April working on it so I’m having it – late or not!

When Victory Patterns released the Hannah dress I was so taken with the simple shape and back detail that I snapped it up. It’s very different to all the vintage style dresses that I’m seeing a lot of right now. The Hannah dress is an ideal pattern for combining two fabrics – perfect for Miss Bossy’s Flower Power challenge!

The simple, slightly A-line shape deceives you into thinking that this is a simple pattern. It is not! It has been rated as ‘intermediate’ which is probably about right but I’ve sewn a few intermediate patterns and this is the hardest one I’ve done by far. This was not a bad thing. This was a real skill builder.

I’m not really a floral kind of person – my stash revealed just stripes and checks and no floral fabric whatsoever apart from the odd fat quarter. Certainly not enough to make clothes with. I had to hit the deep stash which is up in the attic. That is where I found this:

This fabric came from By Hand London when they were doing their print-on-demand fabric. I got two metres of this cow parsley fabric when I backed their kickstarter campaign about 18 months ago. It cost £18 per metre! Although I didn’t pay anywhere near as much as that I am still very protective of it. I’ve got enough left for a top I think. I also found a twill that I quite liked with the main fabric. It doesn’t exactly match though. The fabric weights certainly don’t match. The cow parsley is a crisp but fairly light poplin but the twill is a lot heavier. It’s what I had in though and I’m refusing to buy any fabric for the time being as my stash is starting to take over!

The first tricky part of the pattern was the hidden button placket.

I took a whole evening making sure I got this right because if I messed it up I would need to cut a new front piece. Although it was a bit confusing the instructions really guided me through it. The placket was constructed really early on in the process. The next bit was to sew all the big pieces together. There were some interestingly shaped pieces…

The backs and sides were strange shapes too but I was in ‘the zone’ and forgot to take photos!
There were lots of notches and match points on this pattern. Hundreds of the things which meant precision was needed! Every time I make something I try to be precise but I just can’t do it! The difference in fabric weights probably didn’t help here but I really wasn’t accurate enough. The bit where it most shows is at the pockets. I went back and improved things but the pockets still don’t sit quite right. Next time I’m going to have to baste. I think that’ll improve things no end. 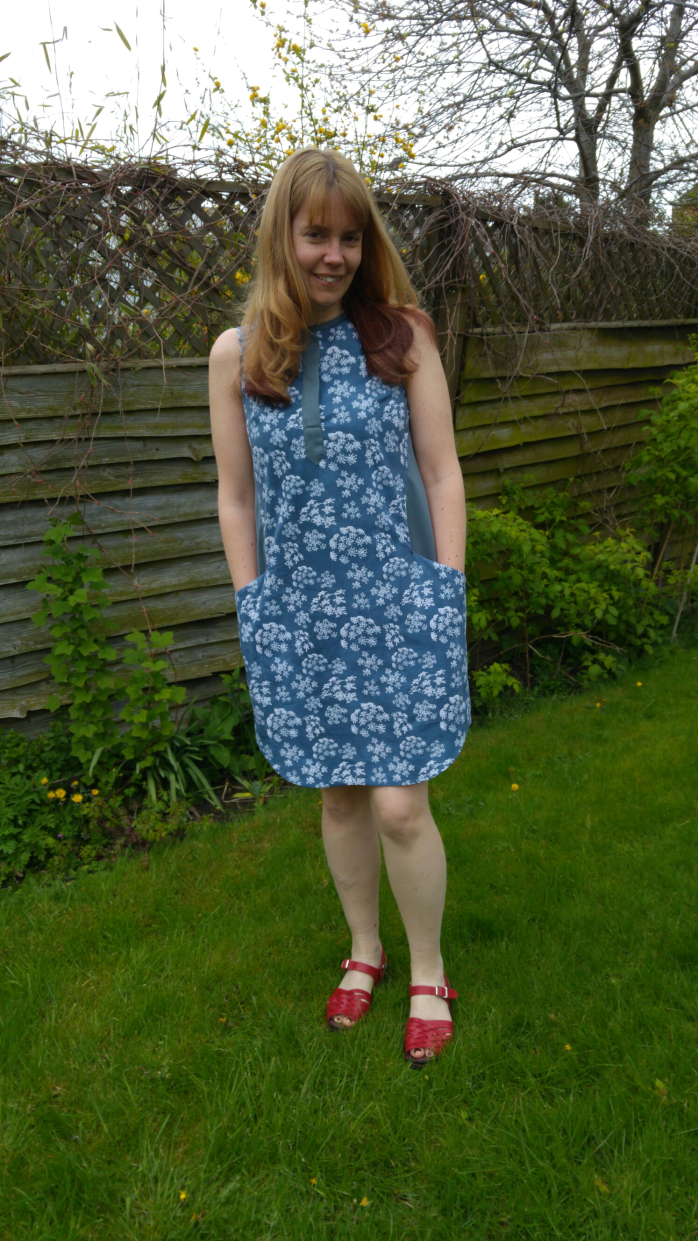 At the back of the dress you fold over the two side panels so they become the cross back. My silly fabric choice makes the back of the dress quite heavy and once the neck band went on, my machine had to work through 7 layers of fabric! I also messed up changed the arm bindings to make them exposed rather than hidden like the pattern suggested!
So it’s not perfect but that’s fine. I really like my new dress and I feel I really challenged myself with this project. Plus I know how I would improve when I come to do this again! I’ll start by buying two lighter weight and more coordinating fabrics!