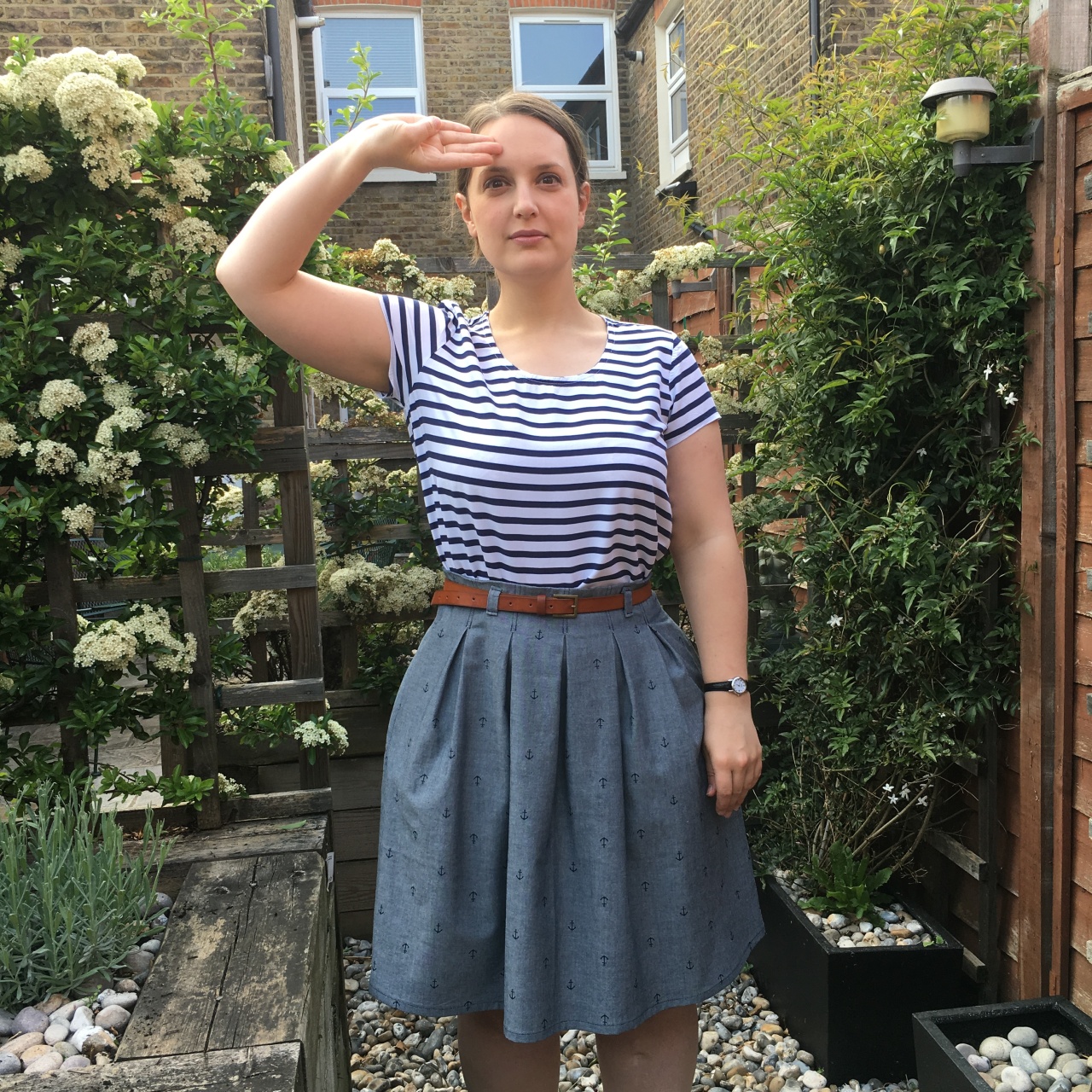 Hey everyone! Happy Indie Pattern Month! I had a bit of a dilemma with this month’s challenge. I made the Chardon skirt by Deer & Doe, which is a new-to-me pattern company, but I ended up making two… So do I enter it into the New to Me week or One Pattern, Two Ways? In the end I got a bit excited about the whole thing and just decided to go for it this week – the skirts were ready and summer has finally reached London so I managed to get outdoor photos taken this afternoon. 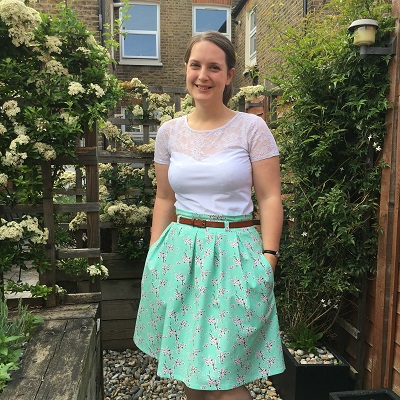 I’ve admired Deer & Doe’s patterns for a while and I bought the Chardon skirt and Datura blouse patterns last year, but I’ve only just got round to having a go at them. With the summer fast approaching, I wanted some new skirts that I could wear for work. The Chardon is perfect – it’s a simple design with inverted box pleats and optional belt loops that looks great in a variety of fabrics. So of course, I made two.

My first attempt is in a mint green cherry blossom print cotton I got from John Lewis which was part of its 150th anniversary range. I bought three metres at the time, thinking I’d make a flouncy dress with it, then changed my mind as I thought it was a bit too girly-girly for my tastes. Less is definitely more so using it for a summer skirt seemed a better option. 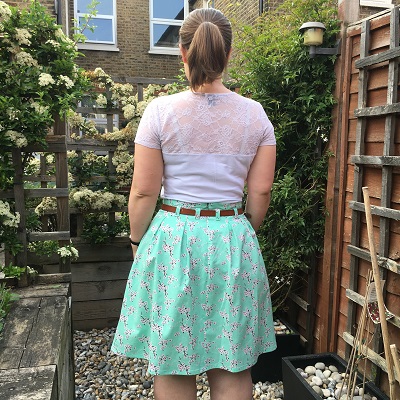 I think I made the right decision turning this into a skirt rather than a dress. Girly, yes, but a dress would have been a bit too much for me.

I cut a straight size 42 and started to sew it up. For a beginners’ skirt, I thought the instructions were really clear, though I did feel that they missed some things that would help take the skirt to the next level. For example, I had to understitch the waistline facing and the pockets so they wouldn’t peek out. I don’t think it’s so much of a problem with the pockets, but I could see the facing popping out all the time. 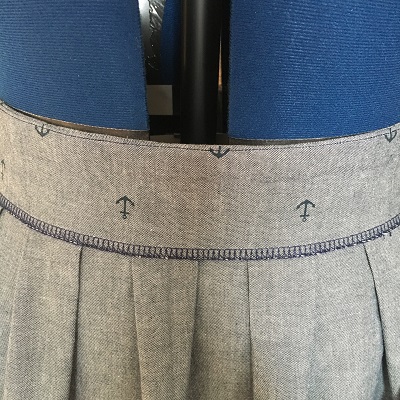 Here’s the understitching on the facing. I love the finish here – oh so neat and crisp!

Elsewhere, I used an invisible zip as that’s what I had in and I couldn’t be bothered to make the bias binding required by the pattern, so I did a normal turned and stitch hem. Since I’m tiny it worked out well – turning the hem up by an inch or so took it up to the perfect length for me.

For my second attempt, I used an anchor print chambray that’s been sitting in my stash for about a year. I love this stuff – it’s super soft, but presses really nicely and holds the pleats really well. It also looks really nice from the inside – overlocked edges look crisp and neat, which just pleases me no end. 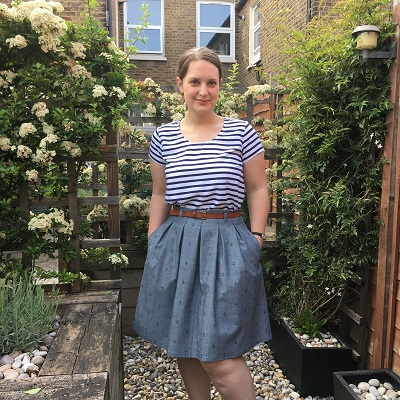 A nautical skirt needs a Breton top to go with it, obvs. Here you can see that the pockets are sitting a bit higher. Much more comfy.

In my first attempt I sewed the belt loops a bit too low down on the waist, so I moved these ones up a bit, as well as the pockets. With my arms straight by my sides I could just get my hands in them which didn’t feel comfortable. I moved them up by two inches which feels much better. 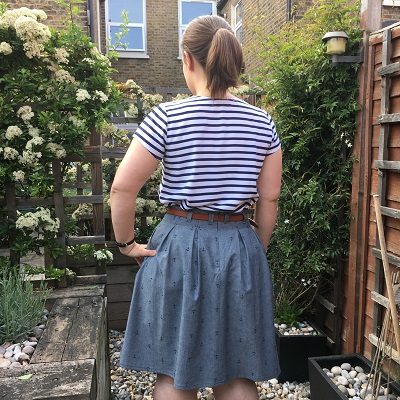 The Chardon is a lovely skirt that I’m really going to enjoy wearing throughout the summer. The blossom print will be great for work and the chambray version is a bit more casual so more of a weekend/holiday skirt. I’m particularly chuffed that I’ve managed to turn two fabrics from the stash into something I’ll get a lot of wear from. As a first taste of Deer & Doe, I’m pretty chuffed. Next stop, the Datura! Keep up with how I get on at my blog, Stuffjohasmade. 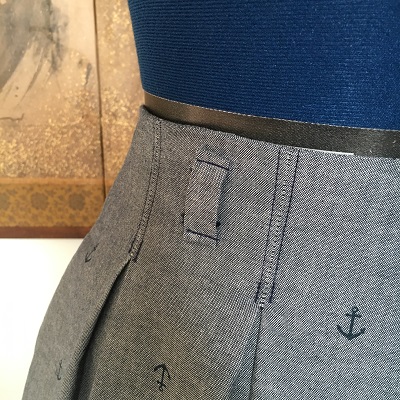 The pleats are stitched down to keep them in place. 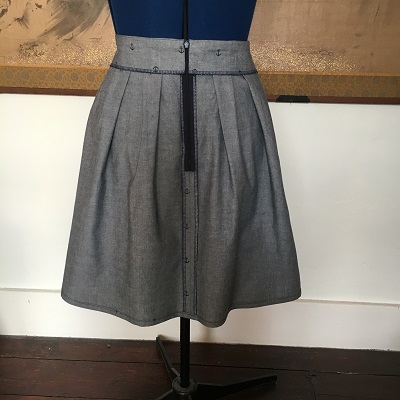 A more general shot of the innards. 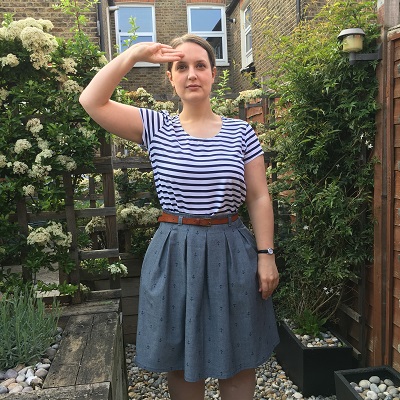 16 thoughts on “An IPM dilemma: the Chardon”