Hello again! It’s been a long, long time since I’ve posted–I took a while off both blogging and sewing. This is blouse is one of the first things I’ve sewed in a while, and it fit all the requirements for the New To Me challenge, so I figured why not post it?

So. I first found out about Festive Road patterns a month or so ago when she (he? they? The writer is French, and Google Translate gets a bit crazy with the pronouns) released a romper pattern. The part of my brain that still resides in twee fantasy land was immediately like, “oh, oh, oh, I must have this sailor-style playsuit.” Fortunately, the more rational part of my brain (“yeah… but you’ll never wear it anywhere”) prevailed. Along the way, I had a look through the other patterns, and wound up deciding to make this blouse instead.

Pattern: Festive Road “Fit But You Know It” Blouse (PDF, free), from the blog Essais & Erreurs
Fabric: I think quilting cotton, repurposed from a dress I made years ago
Notions: 5 buttons; bias tape and cording to make piping 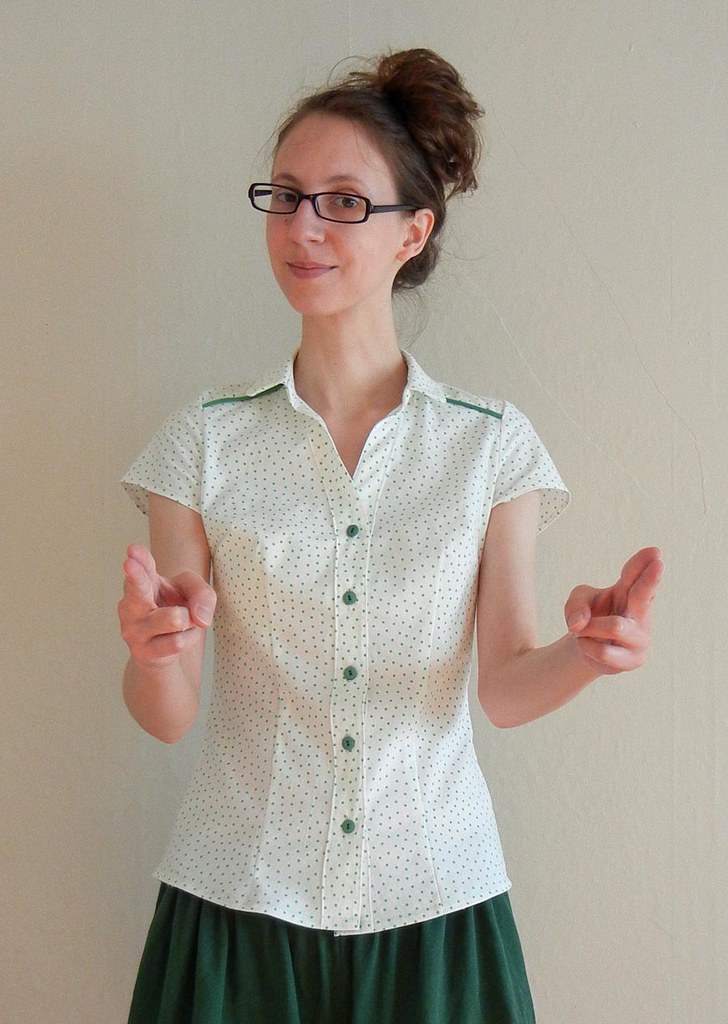 Emergency exits are located to your left and right, and at the back of the aircraft.

Fit: The pattern gives measurements for both the body and the finished garment. The finished garment measurements look like there’s a lot of ease, so I sized down and cut size 34 at the shoulders, bust, and waist, and tapered out to a 36 at the hips. I probably overdid it a little bit (it does fit but it’s very fitted); next time I’ll cut a 36 with maybe 38 hips–which is still a full size smaller than the body measurements suggest I should sew, so keep that in mind.

The sleeves become rather tight if I move my arms to anywhere other than hanging straight down. I won’t fault the pattern for that, because this is pretty usual for me in patterns with sleeves. I don’t think I have that wide an upper back (this seems to be the area causing most of the problems) but I dunno. Maybe I do. Eventually I’ll figure out how to fix this; in the meantime, if I can convince myself it won’t look dopey, maybe I’ll take the sleeves off this blouse to see if it helps with the range of movement.

Alterations: This is usually a big thing for me; I almost never make patterns exactly as they come anymore. This time I actually sewed it almost as written, though. I did add an inch in length to the body, but that’s a pretty standard fitting thing for me. I also added the piping in–I don’t think the instructions say to do that (more on that in a sec), but a few of the other versions I’ve seen made up include it, and I thought it looked nice. 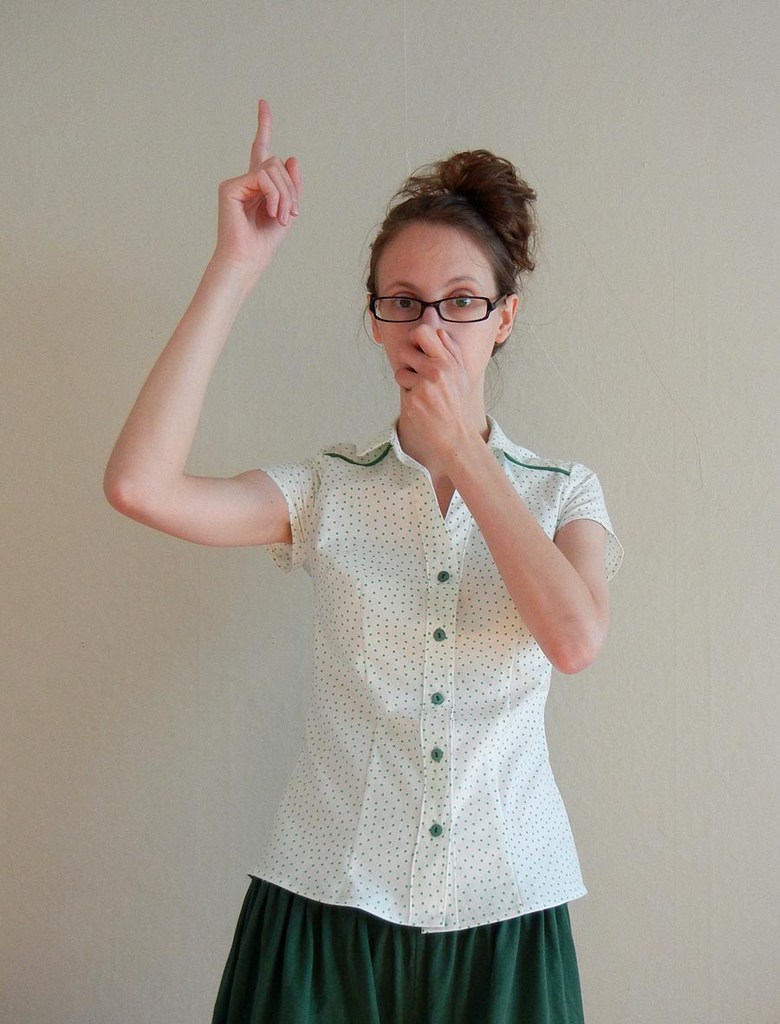 In the event of a loss of cabin pressure, oxygen masks will drop from the ceiling.

Pattern and Instructions: The PDF format is great, really professional. It’s a layered PDF, so you can choose to print only your size(s), with or without seam allowances (which are 1 cm, or 3/8″) included. I’d never used a layered PDF before, and I really liked it. I also appreciated that there were only ten pages to print and stick together. And, yes, everything lined up.

I can’t speak to the actual instructions, because they’re in French and I don’t know French, so I didn’t use them. (I put the blouse together the way I usually put shirts together, and I think it all looks proper.) I can say that the instructions fit onto a single A4 sheet of paper, with two or three small diagrams, so even for those who do know French, I suspect there’s not much hand-holding. 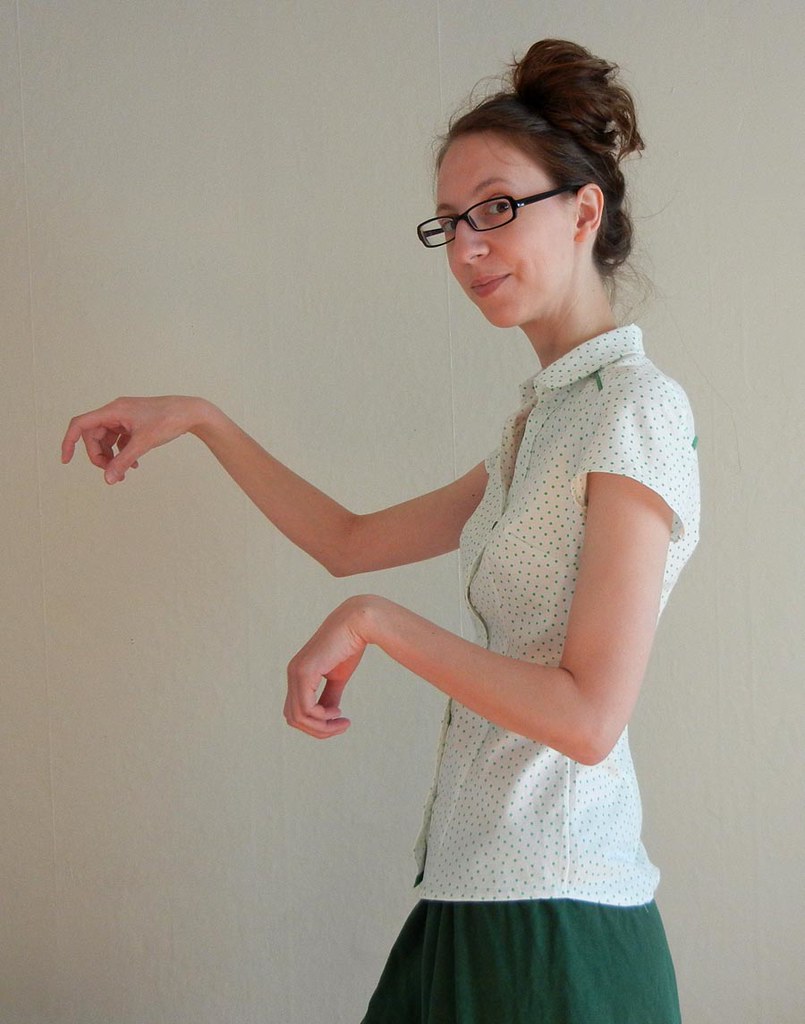 This is probably not how the complimentary beverage cart actually goes, but whatever.

Verdict: I should start by saying that my opinion could very well be colored by the fact that we’re currently enduring an early, longish run of really hot weather, with multiple 100+ degree days, and I don’t really want to wear anything… But at this point, I’m not totally sure I’ll wear this blouse. It’s a bit tighter than I’d like, and the not being able to move my arms thing is a problem. I’m also not so sure I like the fabric. I think it might be a little too stiff for this kind of garment. And it might be a little too… cutesy, I guess? I’m not sure if the piping makes it better or worse. I like it, but I keep making things that unintentionally look like uniforms; the piping reminds me of epaulets and makes me think flight attendant. That said, I hate hate hate taking sewing selfies, but I hated them a little less while pretending to be a flight attendant, so that’s a positive.

I do think I’ll try making this pattern again. It doesn’t take much fabric, and it was pretty quick and easy to sew. I like the yoke (the front and back yokes are all one piece, which was another first for me), maybe sans piping next time. And I think if I cut the correct size, it’ll fit me pretty well. If I can get the short sleeves to work, maybe I’ll try it with long sleeves, but then I guess I say that about all the shirt patterns I like… 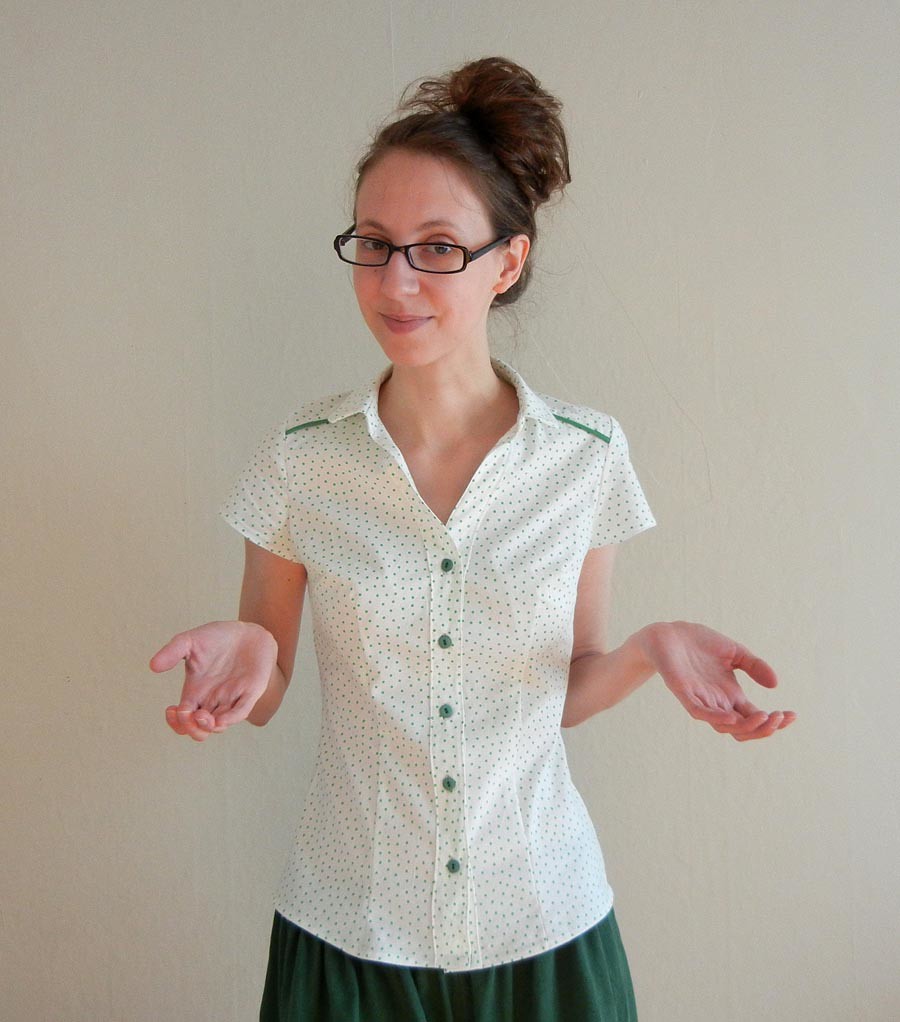 Thank you for flying today. Please return your tray tables to their upright locked positions. We hope you’ve enjoyed your flight.

9 thoughts on “New To Me: Festive Road/Essais & Erreurs Blouse”