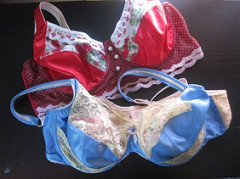 The pattern I used for the “one pattern, two ways” challenge is one I have made several times already. See my April “Flower Power” post…& my May “Inspiration Nation” post. It’s the Shelley bra, from Pin-Up Girls.

I’ve been on a big bramaking kick lately & this challenge seemed like a great way to showcase the way small alterations & fabric choices can make the same pattern look completely different. 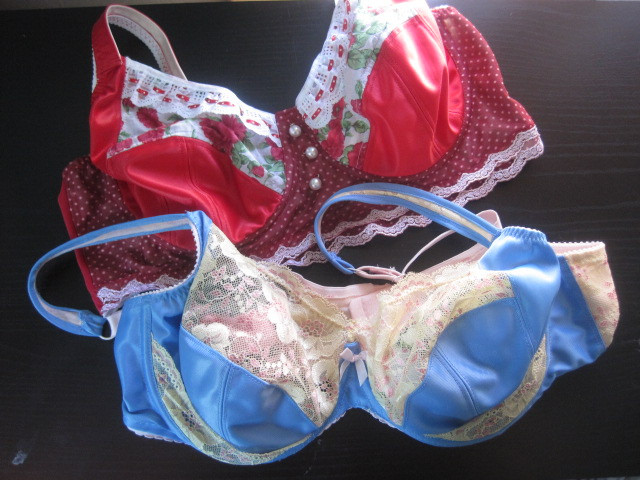 I think of the first bra as the “Bluebird bra,” because the Duoplex I used in the cups & frame is called “bluebird” on the Bramaker’s Supply website. In real life, it’s more of a soft Wedgewood blue color. I paired with pretty yellow lace with pink accents. The Shelley is specifically designed for a lace upper cup. I made a little tweak by shortening the bridge & widening the upper cup so the lace meets above the bridge & appears continuous. I also placed a little extra lace along the bottom of the cup, & cut the frame into a Gothic arch (see the way the bottom arches up in the middle?).

But mostly I used all my lace on the back band. I used pink powernet under the lace (a necessity for a larger cup size like mine—a band constructed only of stretch lace would never give me the support I need). I also used pale pink findings throughout to pick up the pink accents in the lace.

The straps were a technically tricky bit of sewing. They are made of lace hand-basted over sheer, stable nylon. I finished the sides with Duoplex that I ran through my bias tape maker (though it was cut on the straight grain because stretchy straps are a recipe for disaster!). The end result is fairly subtle, but I love the fact that this entire bra is just covered in lace! 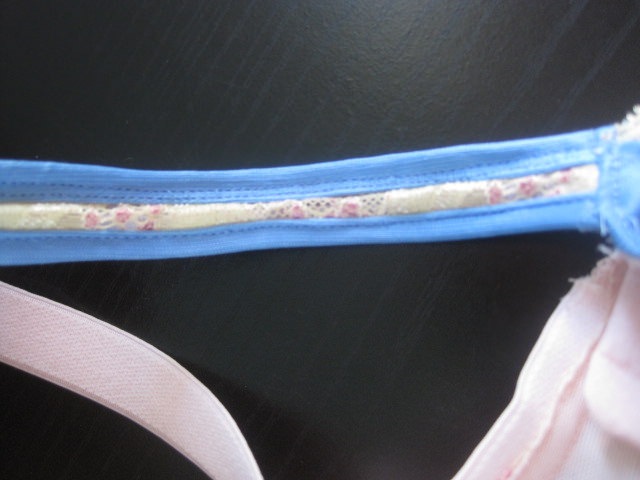 I call the second bra the “Vintage Valentine”. I’m not in the habit of naming my makes, but come on. This thing just SCREAMS ornate Victorian valentine! (& yes, this is me modeling it! Eek!)

I started with the polka dot netting with this one. I actually don’t really care for polka dots, nor for red lingerie, so I was really flummoxed about using this stuff in a bra. It was also VERY sheer. To make the color pop at all, I had to layer it, but the polka dots in the bottom layer were still visible through the top layer. Ultimately, I decided to use the netting on the frame instead of the upper cup, & preserve the scallops along the bottom. I just placed the low point of the scallop along the bottom of the pattern piece & cut it out that way. & then I realized that I had to layer my netting with each polka dot precisely on top of another polka dot if I didn’t want the whole thing to be an unsightly mess of random polka dots. This gave me the chance to offset the two rows of scallops, but it necessitated a LOT of very finicky hand-basting. & I had to extend the length of the back band a bit to match the longline dimensions of the frame.

So what about the cups? I thought I’d just do all red Duoplex, but I wasn’t stoked about it. It just seemed kind of blah. I happened to pile the fabrics & notions I was pulling for this bra next to the scraps left over from my rose print Marigold dress, & suddenly I had an idea! What if I cut the upper cup from those scraps of Swiss dot? I could use a bit of white lace along the top to finish the edge & soften the impact of all that red.

I happened to have several huge spools of antique rigid lace trim I picked up at a thrift store for dirt cheap. I got it out & started draping it along the cup edge & had another idea…Would ribbon fit through those little holes? I tried some of the narrowest ribbon I had & it kind of worked. I decided to keep an eye out for something even smaller.

The next day, I hit up the Hancock liquidation sales & came me across this 1/8” red polka dot ribbon. See above: re: my feelings about red & polka dots, but I knew it would be PERFECT for turning my boring white lace into bespoke insertion lace! I tried a few different treatments trying to decide if I wanted more or less ribbon showing, & if I wanted the rows even or staggered. & this is what I decided on!

I kept the back simple (just red powernet) & used white notions for a clean, bright finish. I came upon a trio of imitation pearl ball shank buttons in my stash that called out to decorate the bridge. The bra really came together once I sewed those on. 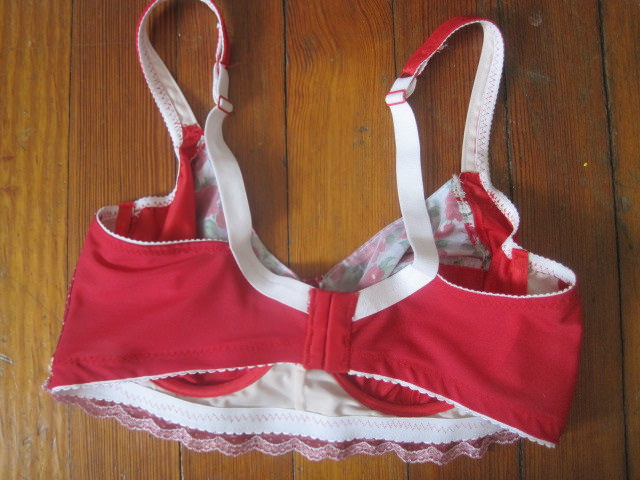 You can stop by my blog for more details & to see the matching undies I made for each of these bras (not from indie patterns, sadly, so I won’t include them here—but the Vintage Valentine undies have quite an elaborate ruffle situation happening!). Thanks for reading!

21 thoughts on “one pattern, two ways: the Shelley bra”