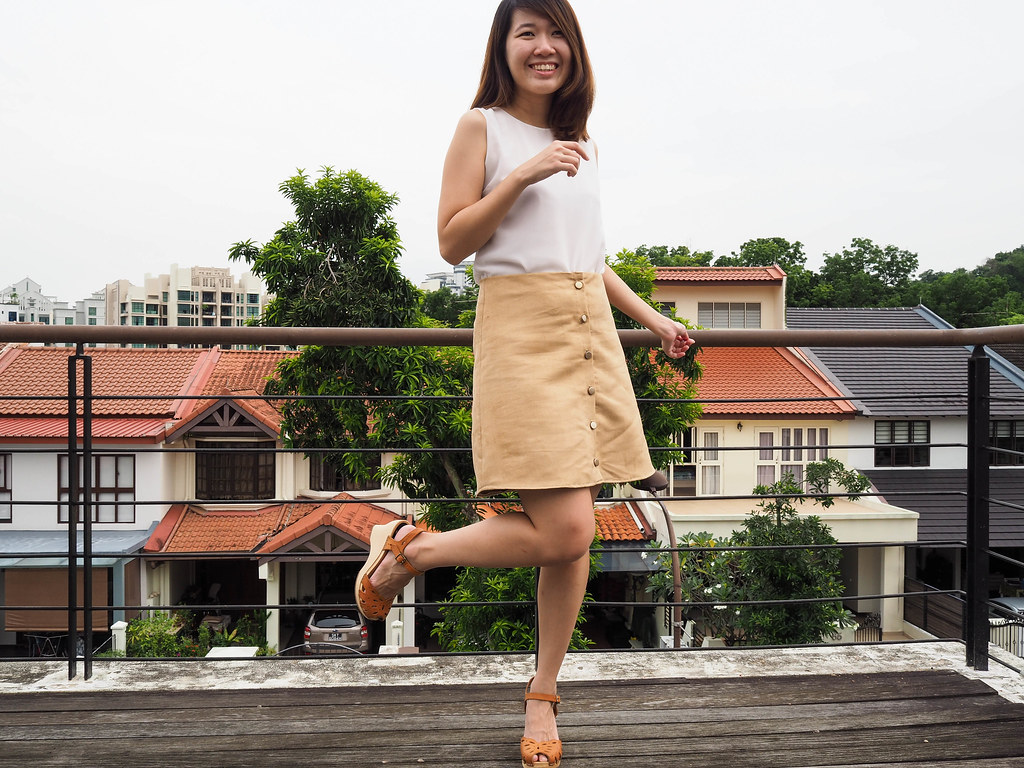 As any one who follows the fashion bloggersphere would have noticed, the 70s’ button-down suede skirt trend came back into fashion in a BIG way late last year / early this year. Maxi, midi, mini, you name it – as long as it was brown suede and had buttons down the middle some fashionista out there was wearing it. I’ve been loving and lusting over all those gorgeous suede skirts for ages now but never got down to scoring one for myself – so when I heard that the theme for this year’s IPM included a Pattern Hack week, I knew I had to give it a go! (Psst, I would show you some RTW inspiration but I’ll save that for next week’s challenge, eh? ;D)

I wanted to start with a simple A-line skirt pattern as a base and alter it accordingly. Having tried out the Tessuti Libby A-Line Skirt Pattern once before (which is free!!), I knew that it had a silhouette that was similar to the RTW versions I had seen and that it would be easy enough to pattern hack. 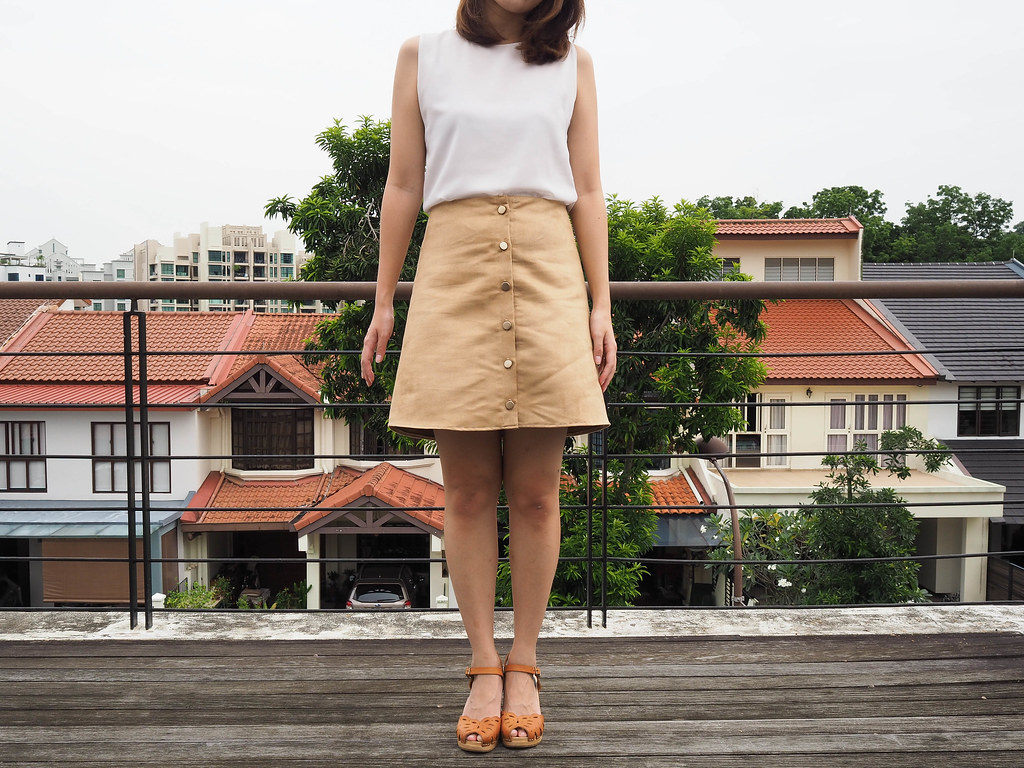 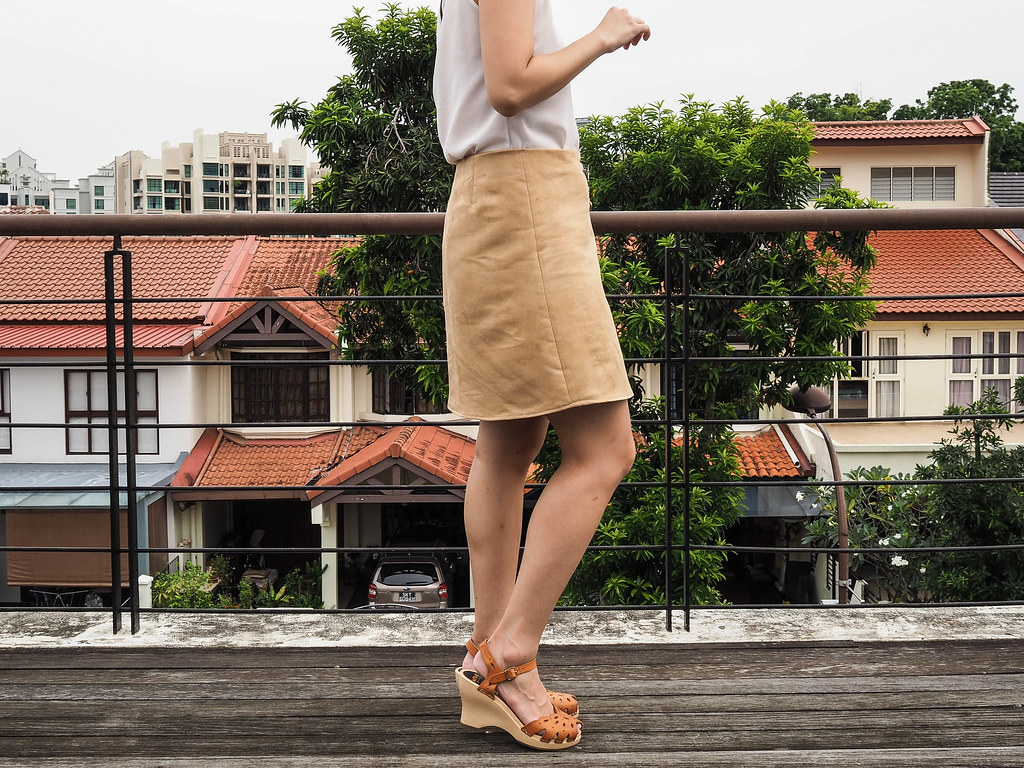 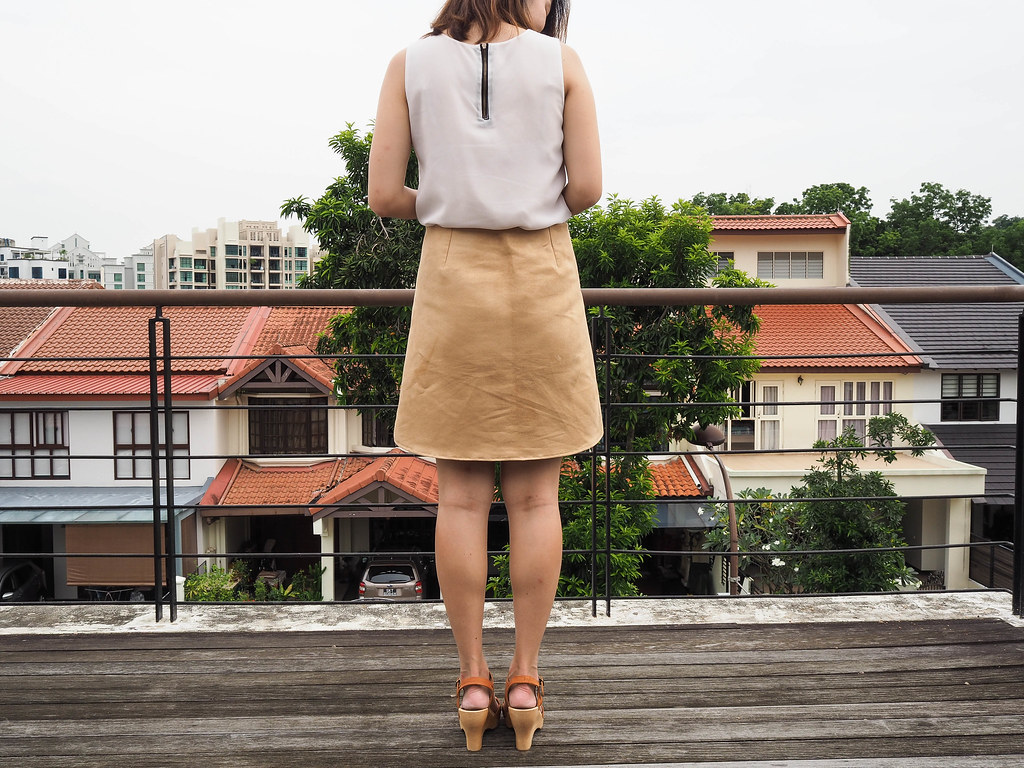 The Libby Skirt originally has a side zip closure on the left and has a waistband facing all around. My plan was to eliminate the zipper and add a functional button placket down the centre front instead. I made no changes to the skirt back (cut 1 on the fold) or to the facings apart from cutting the front facing as 2 pieces rather than on the fold. As for the front skirt piece, I created a 3cm wide button placket and cut 2 pieces instead of 1 on the fold. I did this by shifting the centre front outwards by 5.5 cm – an additional 1.5cm for the left half of the button placket, then another 3cm for the placket facing and a last 1cm as the seam allowance for the placket to be folded over and top stitched down. The pattern piece looked like this (below) when I was through – pretty neat if I do say so myself! I also had lots of guidance using this very helpful tutorial. 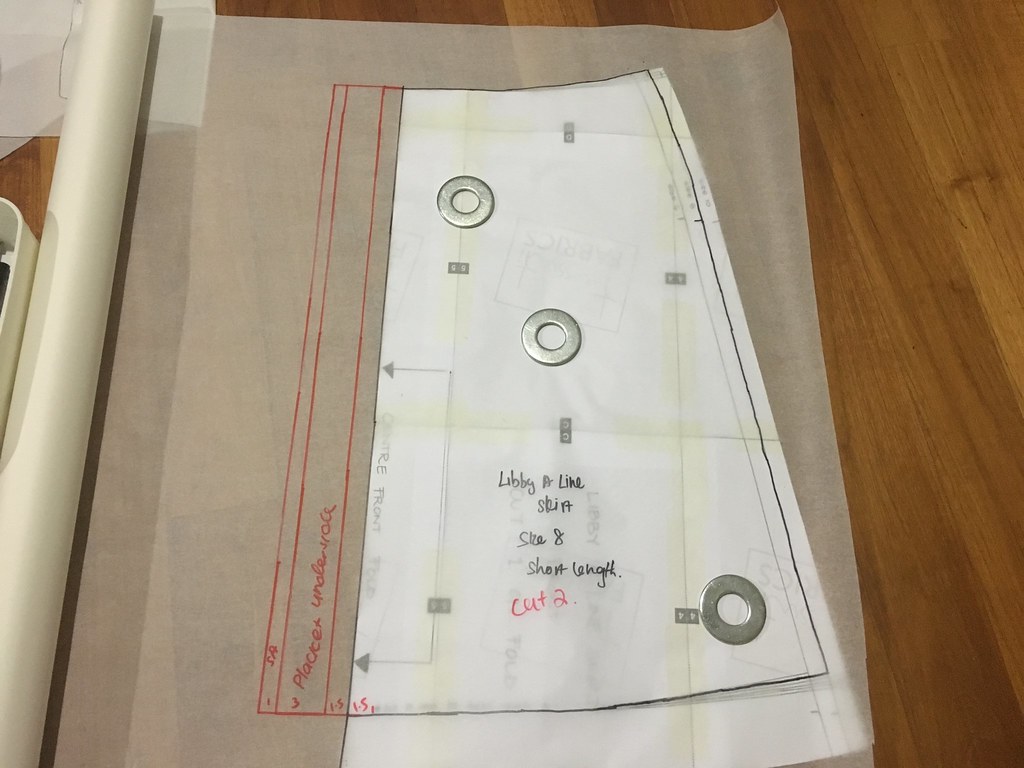 My only mistake was trusting the pattern measurements instead of making a muslin and test fitting the garment during construction. I knew from my previous experience with the pattern that the pattern ran big – so when my measurements placed me in the middle of a size 8 and 10, I went with a straight size 8. BAD MOVE – had I tried on the skirt I would have found out that I should have cut a size 6 instead! I ended up taking out about 1/2″ from either side seam as it was way too big. Fabric and Notions  Of course for a true 70s’ mini skirt I had to go with faux suede! This doe coloured faux suede was picked up for a steal from a furnishing fabric shop called Toko Liman along Jalan Malioboro in Yogyakarta. It’s wonderfully soft and the sheen is mesmerisingly multi-dimensional. It’s also easy to sew with although it doesn’t iron well and tends to crease a whole lot while wearing! 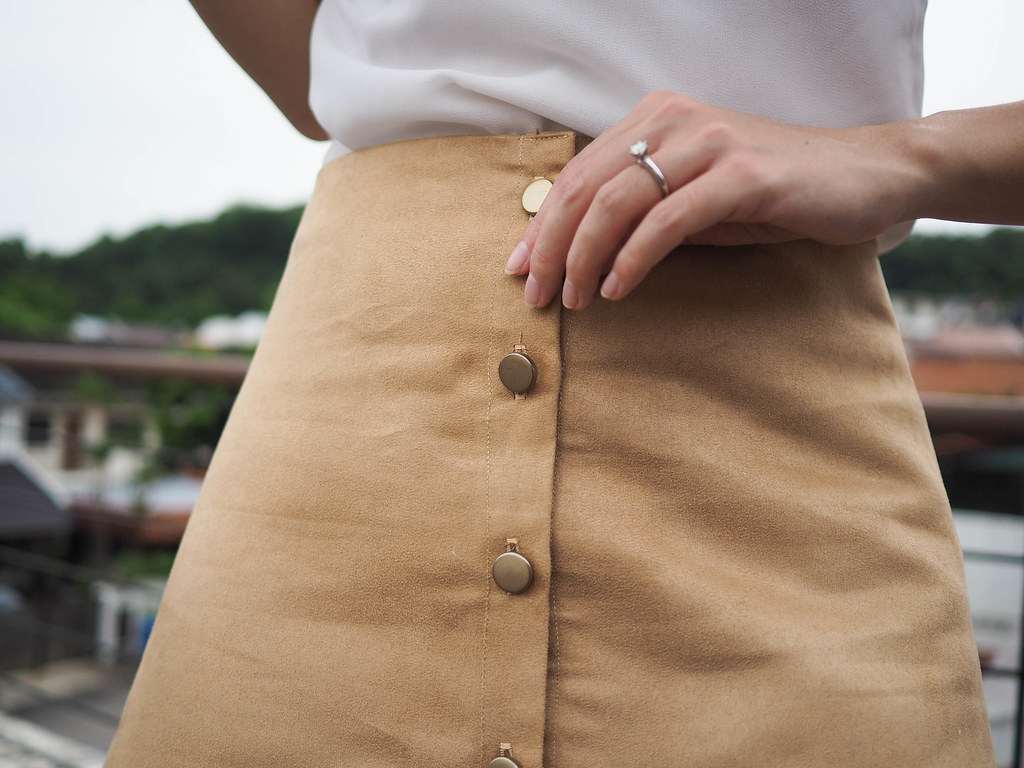 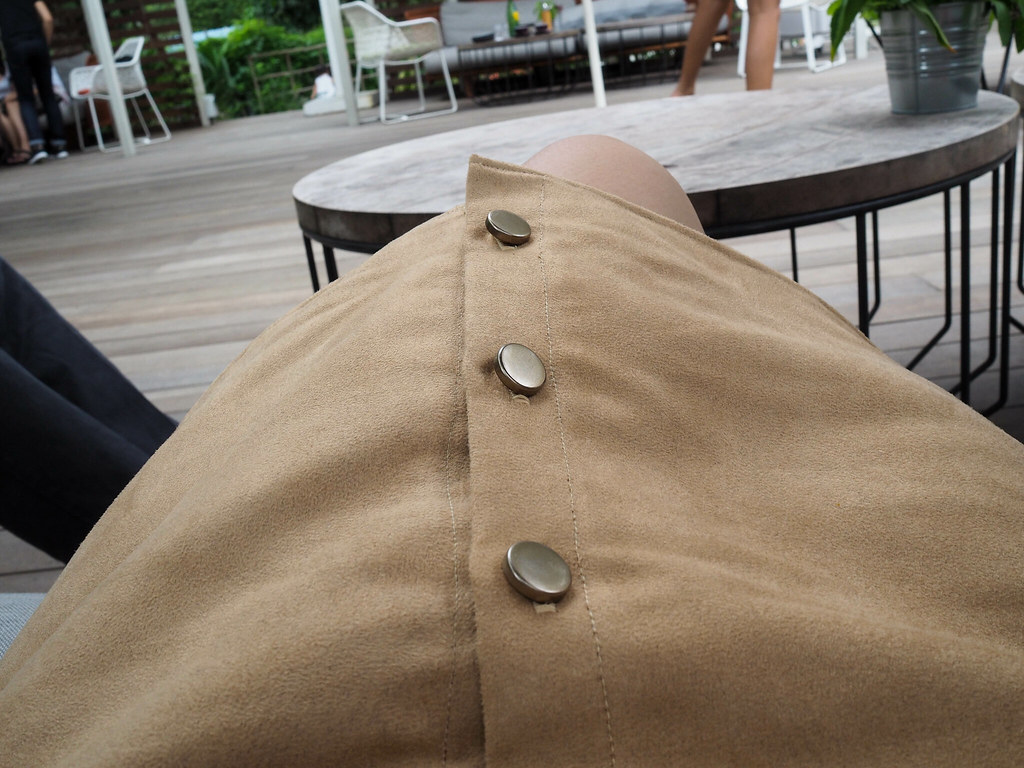 As for the lovely buttons down the centre front – they were repurposed from a favourite Zara sweater of mine which is still in active duty but is simply impractical to wear regularly because of the tropical heat over here. Even with the pattern hacking, button hole making and button sewing, this was a really fast make and amazingly satisfying to sew. My only word of caution would be that the Tessuti Libby pattern runs big, and to be sure to try on the skirt before finishing to avoid having to do the massive amounts of unpicking I had to resort to to take the waist in! Other than that, this is a great skirt base from which to create lots of hacks – especially as there are only 2 darts in the back!

It’s been so great to see all the various hacks in action this week – pattern hacking and copying RTW are just about my favourite part of sewing! I can’t wait to see what other exciting makes are to come!