Well, we all know by now that shirtdresses are a big trend in the sewing world at the moment and that’s a trend I wanted to be a part of. Or it could just be that I am fashionably late to this party and the shirtdress trend is fading. Either way, I love this dress and will wear it as much as possible this summer.

This is my Brudone dress. Granted it could also be called the Bellayère dress, but left to right seems as natural to me as top to bottom, which makes it the Brudone dress. As you might have guessed this is a mashup of two Deer and Doe patterns; the Bruyère shirt and Belladone dress. I have sewn the Belladone before (like three iterations) but it was the first time using Bruyère. 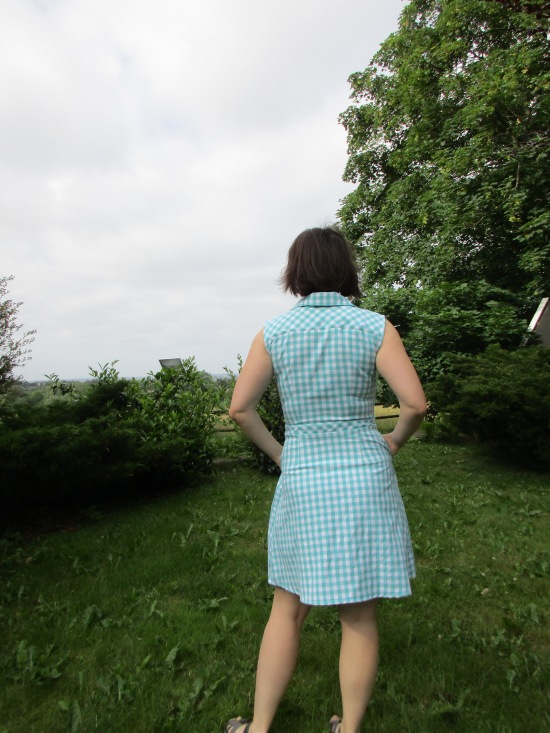 I prefer a darted skirt over a pleated one

I started out with the shirt portion of the dress (mainly because I couldn’t decide on a skirt). My usual adjustments includes lengthening the bodice (my torso is really long) and an FBA. I cut the yoke and the waistband on the bias to break up the stripes and also to avoid the pattern matching. I would’ve done the same for the button band, but I ran out of fabric. The facings, inner yoke and waistband are all lined with lightweight white sheeting to avoid the pattern showing through and to avoid stretching the bias parts. The armholes are finished with bias tape.

Nice insides (except for that waistband pressed wrongly…easy fix!)

For the skirt I was pondering several alternatives. Should I  just extend the Bruyère pieces? It would have been the easiest option, but I’m not sure it would have made for an exciting hack, plus I wasn’t sure how those pleat would look on me. Also, I wanted pockets. In the end I chose the Belladone skirt; I like the shape of it and the pockets. The back was cut on the fold and the front as two parts. All pieces were widened to account for the width of the shirt and button closure. Here I cut the hip yoke on the bias and pockets are also lined with the white sheeting. I also changed the direction of the pleats. The buttons are called coconut buttons, but don’t ask which part of the coconut.

Deer and Doe instructions are not as detailed as other indie companies. The instructions are brief and there are just a few illustrations. Also, it felt as some of the details had been lost in translation between French and English, when I was confused by the English instructions I found that the French ones included more details and allowed me to carry on (English could say “top-stitch close to edge, whereas French gave a 2 mm measurement. Small things like that).

This dress took me quite some time. There are a lot of details which require precision, plus I decided to French seam the whole thing. The insides are so pretty! (One could argue that it would be prettier if I had bound the pockets as well, but it didn’t occur to me at the time. The overlocked seams works fine for me). The fabric is a cotton weave which frayed like crazy, but should be perfect for a summer dress. Let’s just hope the summer weather cooperates enough so I can wear it all summer long. (Also, it has suffered from some vanity measurements on my part, it’s a little too tight. Better lay off that pasta and cakes…)