Once I have spent so much time to make all the necessary adjustments to a pattern to fit my odd measurements I like to make it over and over again, challenging myself to hack it up and give it a different look every time so the TMS IMP Hack It contest was right up my ally. I’ve taken my new love, the Sewaholic Granville Shirt and turned it into a short sleeve shirtdress made up in a cotton print. 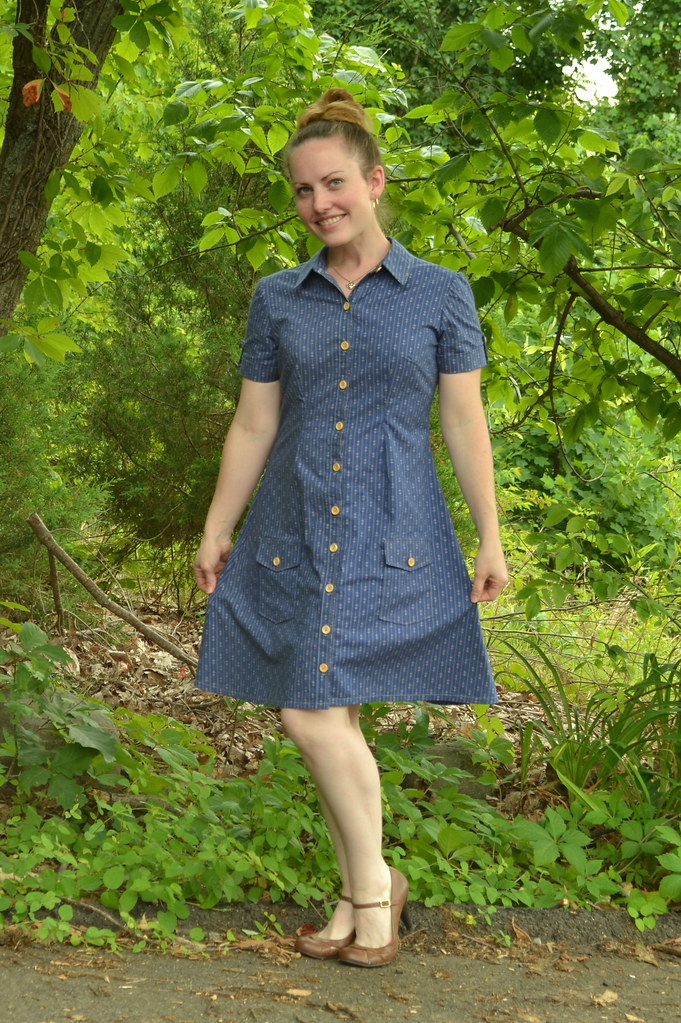 I started by tracing off the main body pieces and extending the lower hem at the side seam by 13 inches, following the angle of the hip flare. Since the Granville is drafted with a curved shirttail hem which was longer in the center and shorter on the sides, I lengthened the center front by about 10 inches and then drew a gentle curve to connect the center to sides. 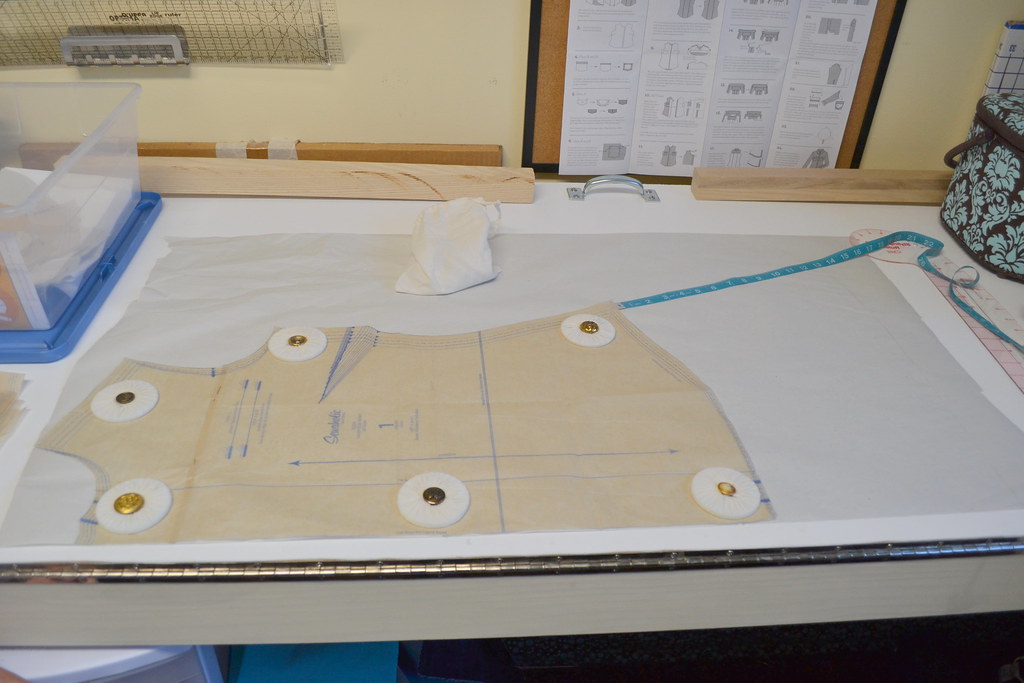 This took a little more effort on the back as it has a 3 piece back with princess seams but the concept was about the same. I  also lengthened the button band and added 4 buttons with the same spacing as was already established in the pattern. I wasn’t so confident in truing the lower edge in the flat pattern stage but after it was sewn up it looked just right.

My next hack on the pattern was turning it into a short sleeve. If you’ve been following IPM all month, you probably saw my 1 Pattern 2 Ways entry on which I first hacked up the Granville sleeve. I was so pleased with the way it turned out I decided to do it again for this shirtdress.

It was a bit of a head-scratcher to actually draft the sleeve piece. I wanted to have a folded one piece cuff but I didn’t want the stitching or edge showing where I folded the facing portion to the inside. After tracing off the original sleeve, I decided on the finished short sleeve length and marked that on the piece. Then I played origami for a while folding, unfolding, and refolding the paper until I had marked all the fold lines and then I chopped off the excess length. As I went along, I jotted down which lines were for which stage of the process and numbered them in order so as to leave myself directions. 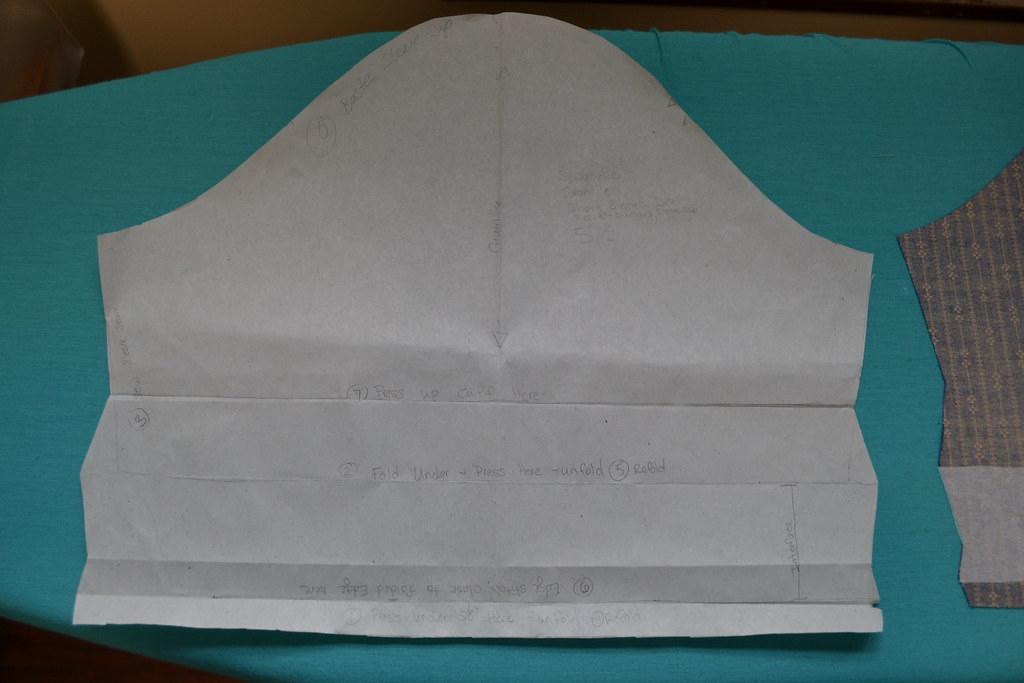 I’m so glad I did because later when I went to sew up the piece I wouldn’t have remembered where to start if I hadn’t left myself a trail. If you peek closely at the image you might be able to see my pencil notes and notice that I forgot to label the first step of running the basting gathers along the sleeve cap so I labeled that step zero! Ha ha!

After all the folding I trued the side seams while it was folded into its final configuration so as to retain the proper width at each section of the folded cuff, ensuring that my bicep wouldn’t fall victim to a muffin top look (can you call it that when it’s your arm, not your love handles?). The resulting pattern piece looks a bit like an accordian but it worked perfectly.

Step-by-step here’s how the sewing went down:

Before sewing: Apply fusible interfacing to the section that will be the outside of cuff. 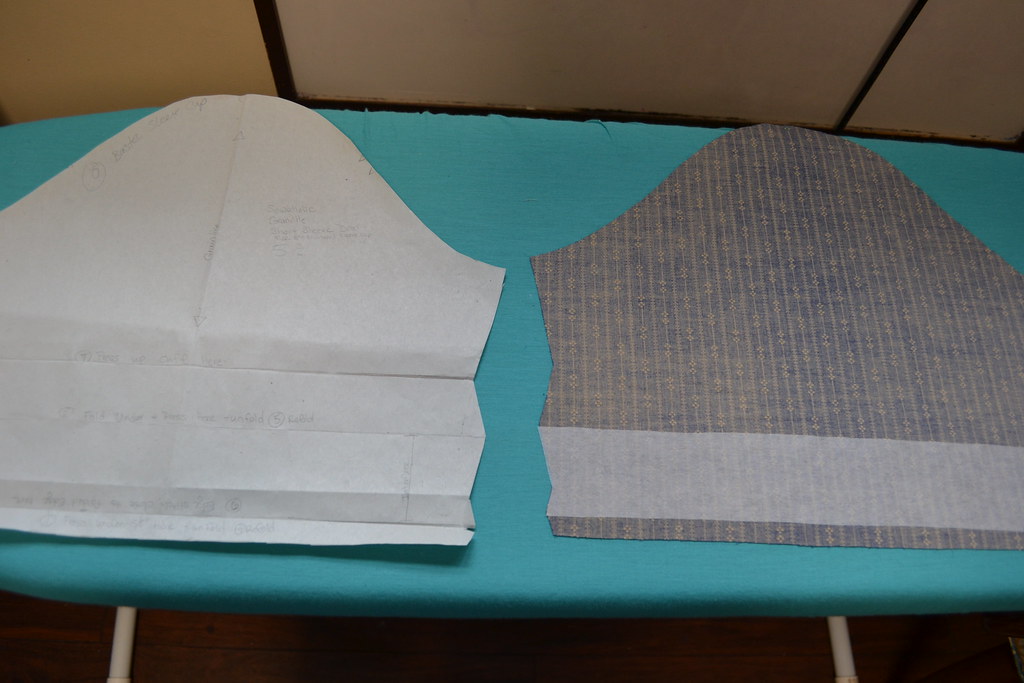 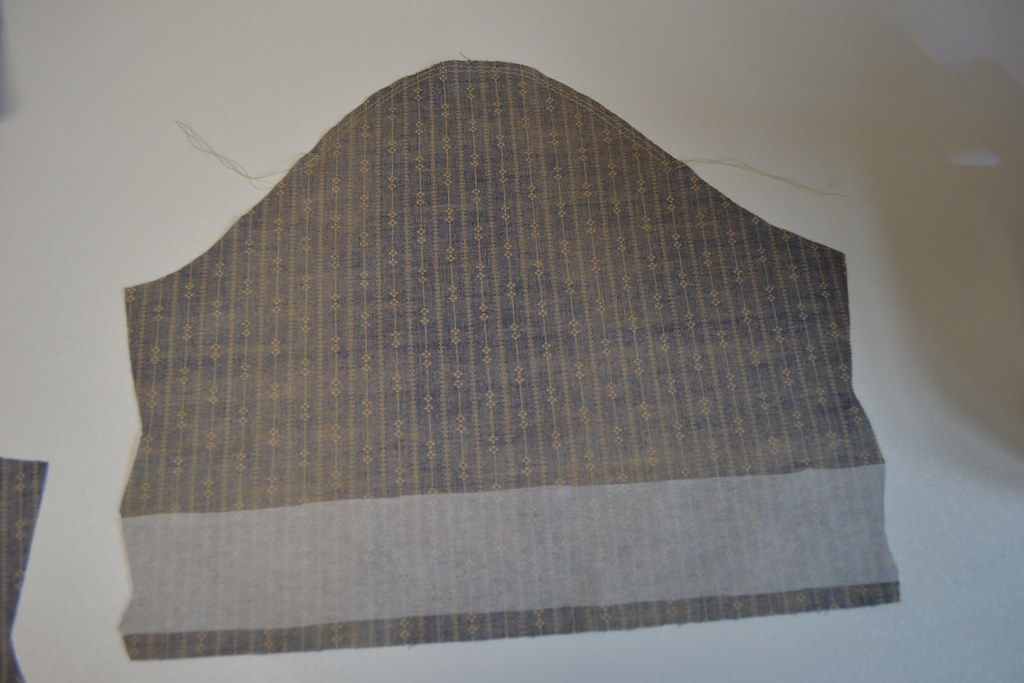 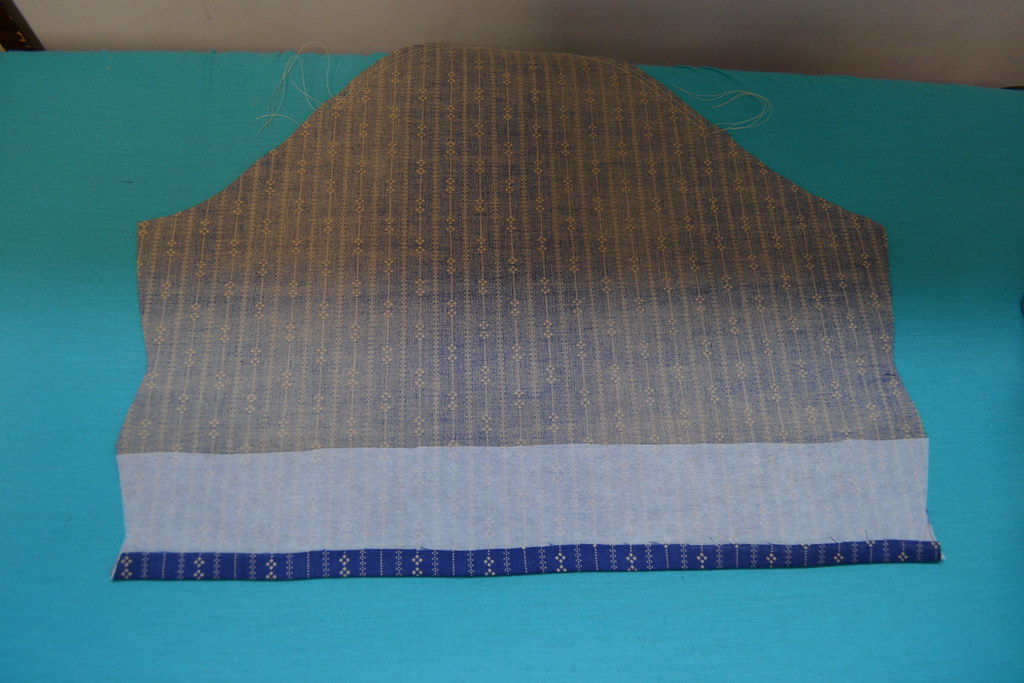 Step 2: Fold under and press along line that will become upper edge of cuff when finished. 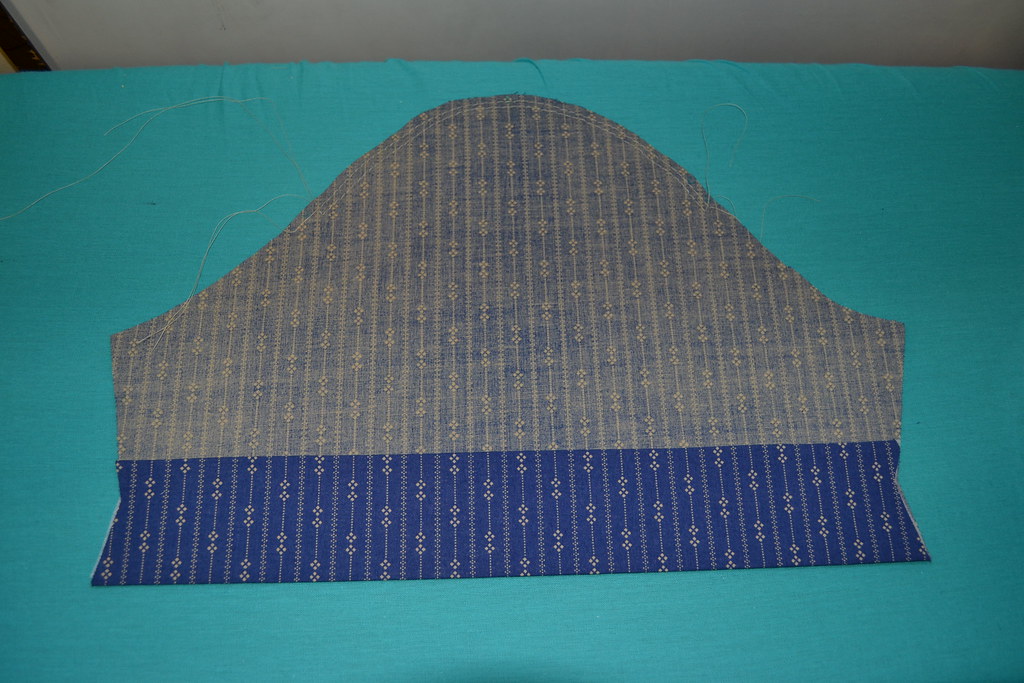 Unfold. (This makes folding it up later easier.) 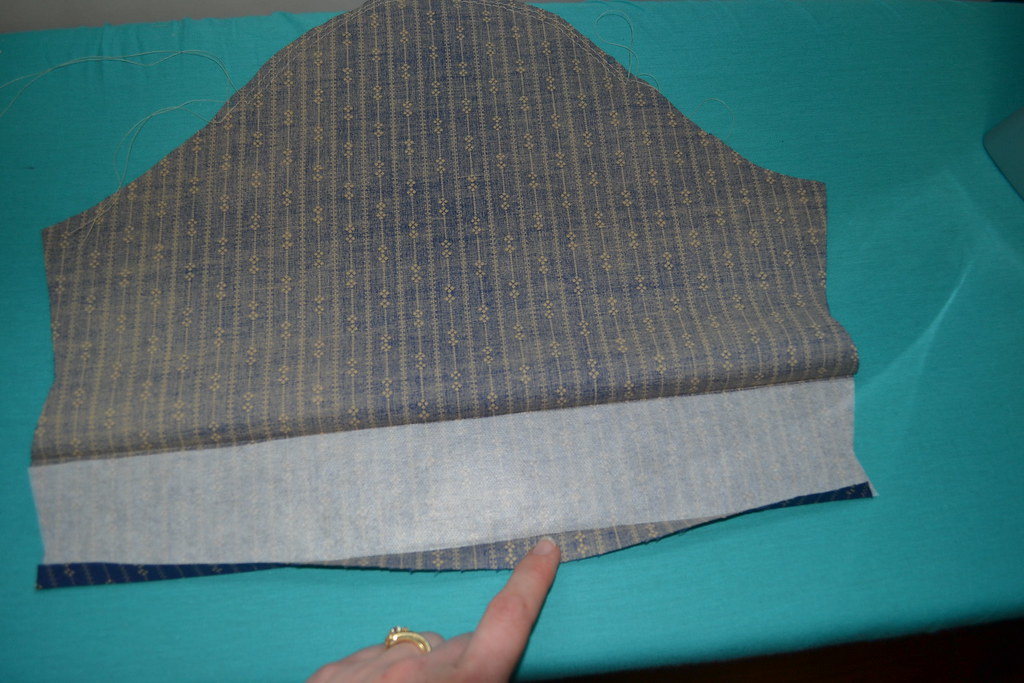 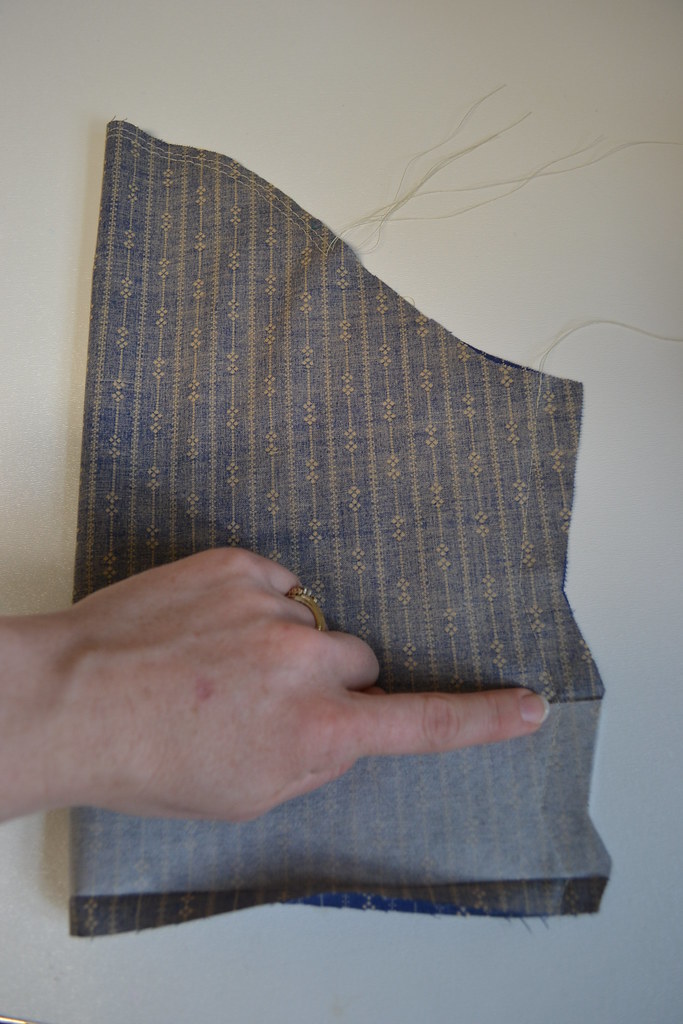 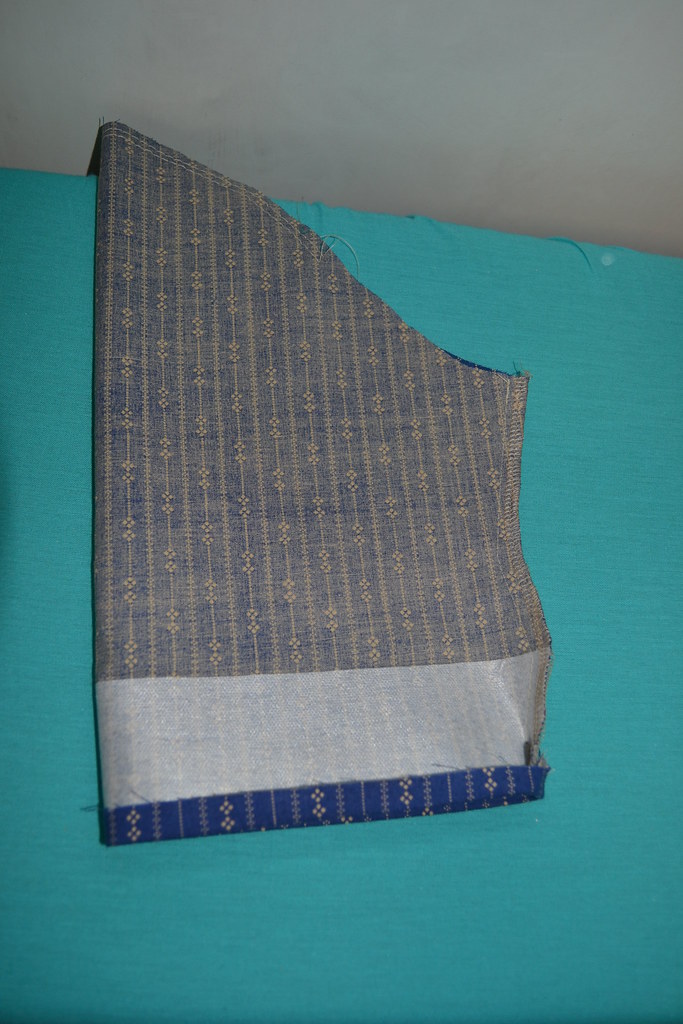 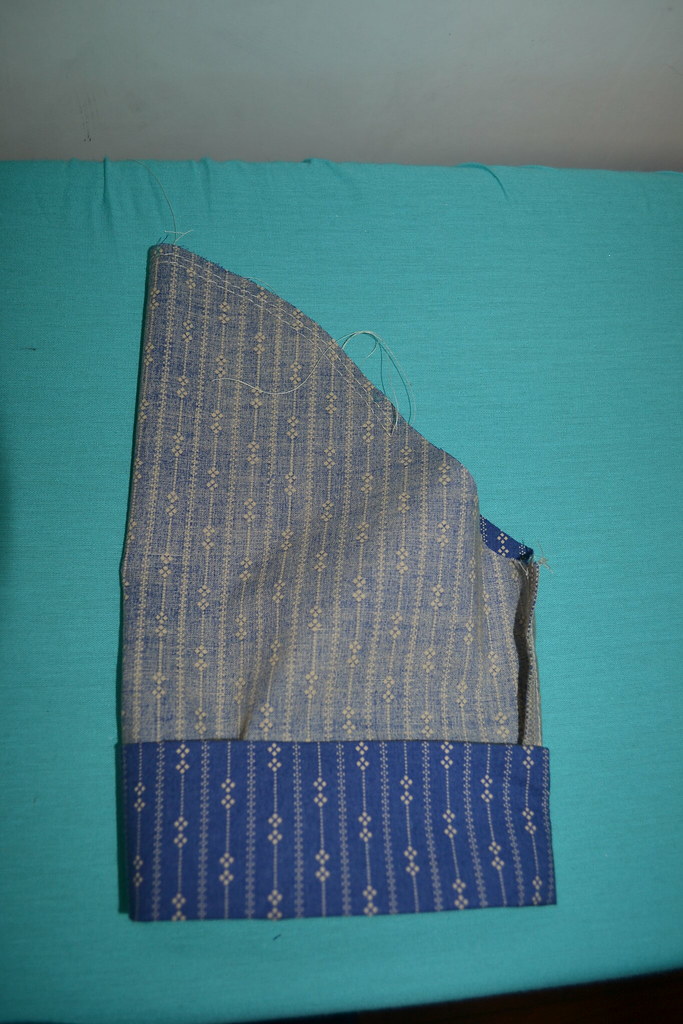 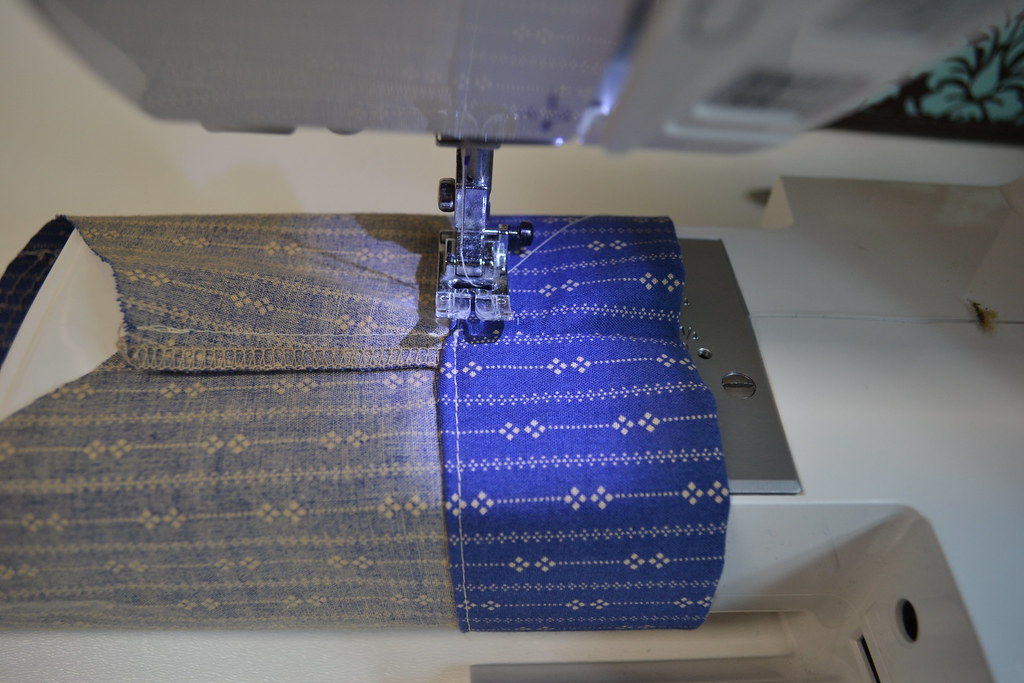 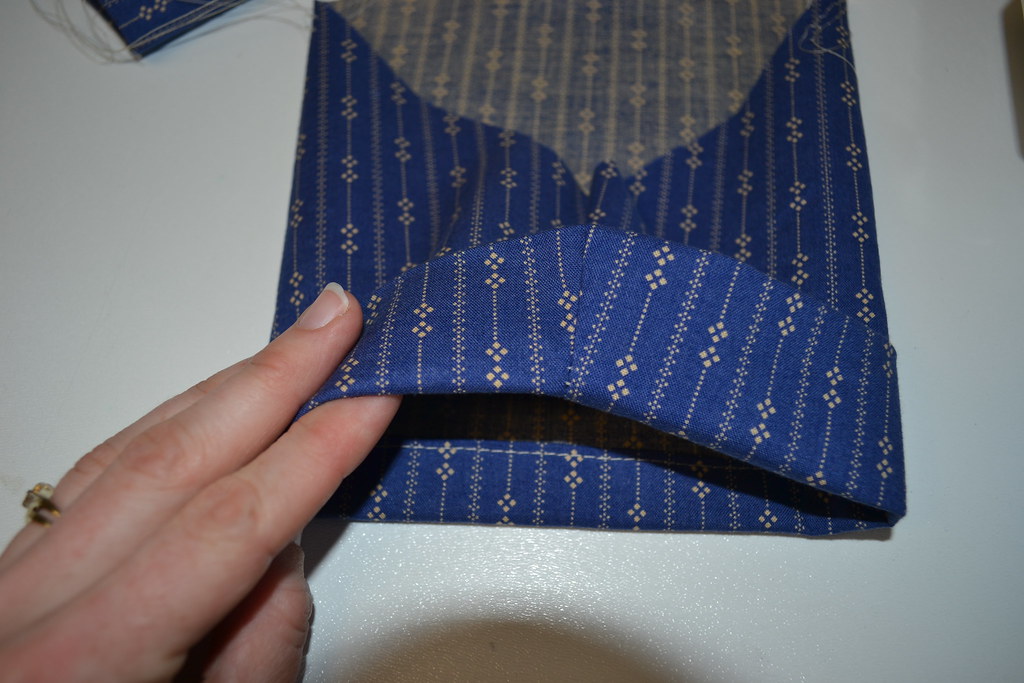 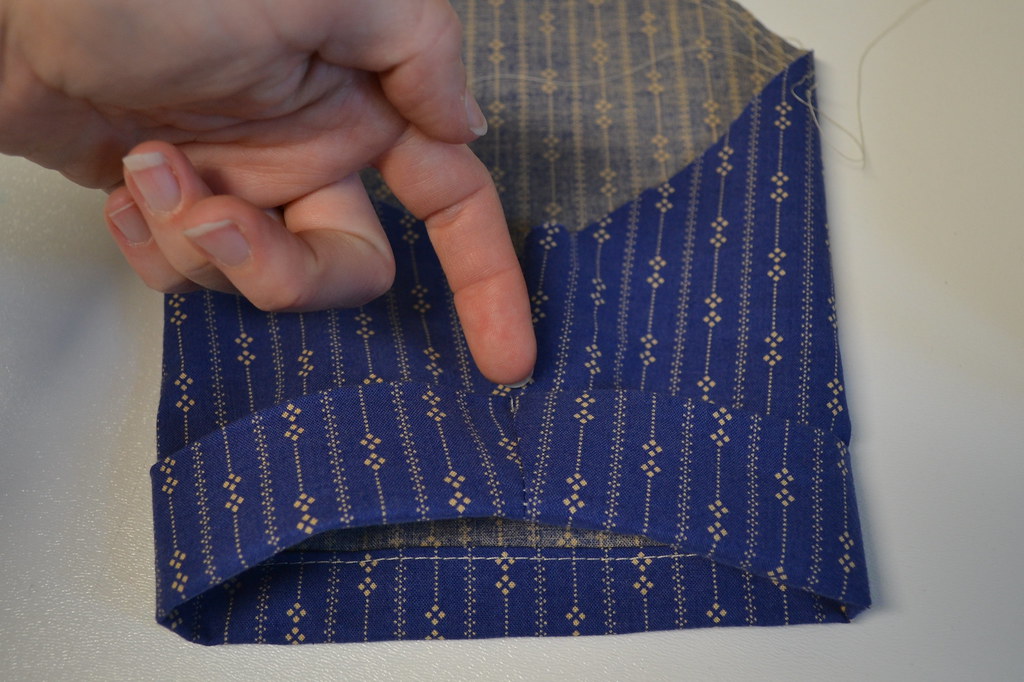 I also added little button tabs to hold the cuffs in place which I made into a point at the top to echo the points of the pocket flaps. 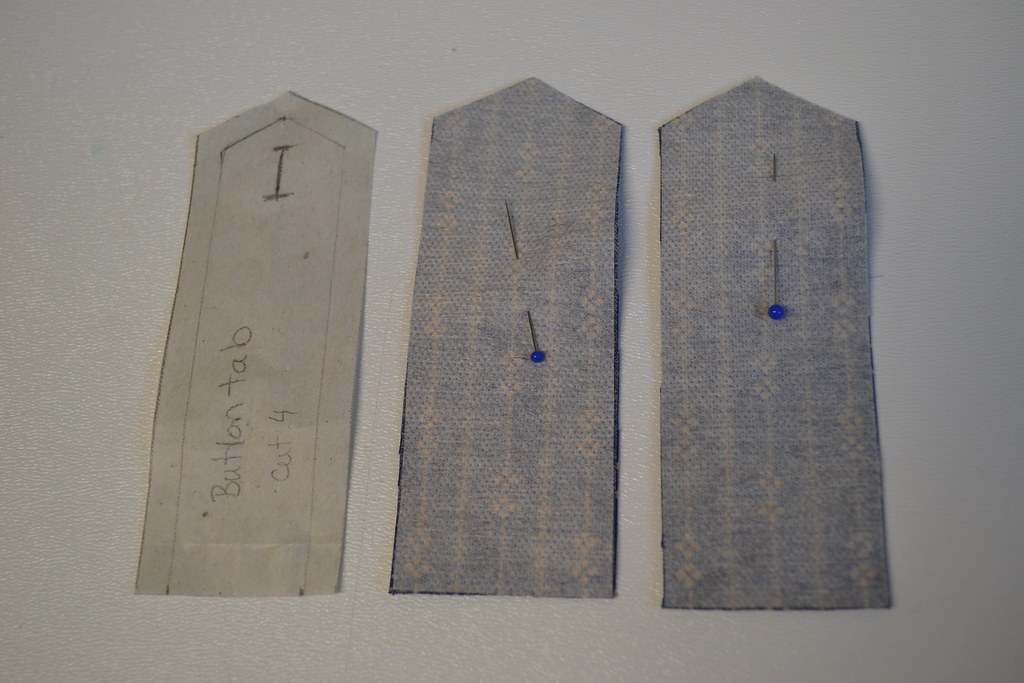 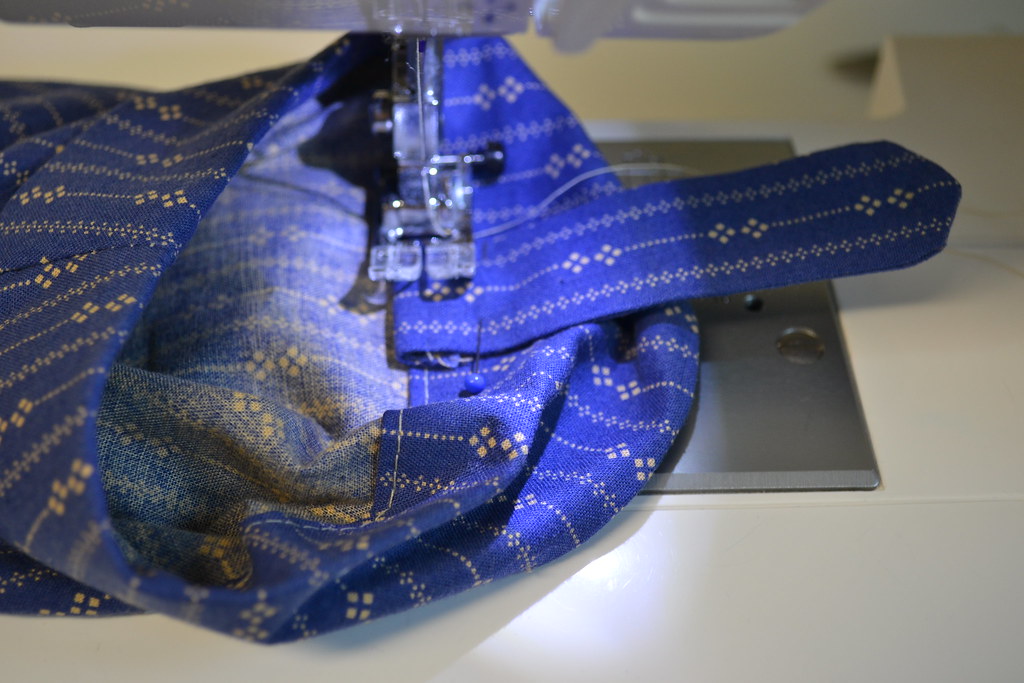 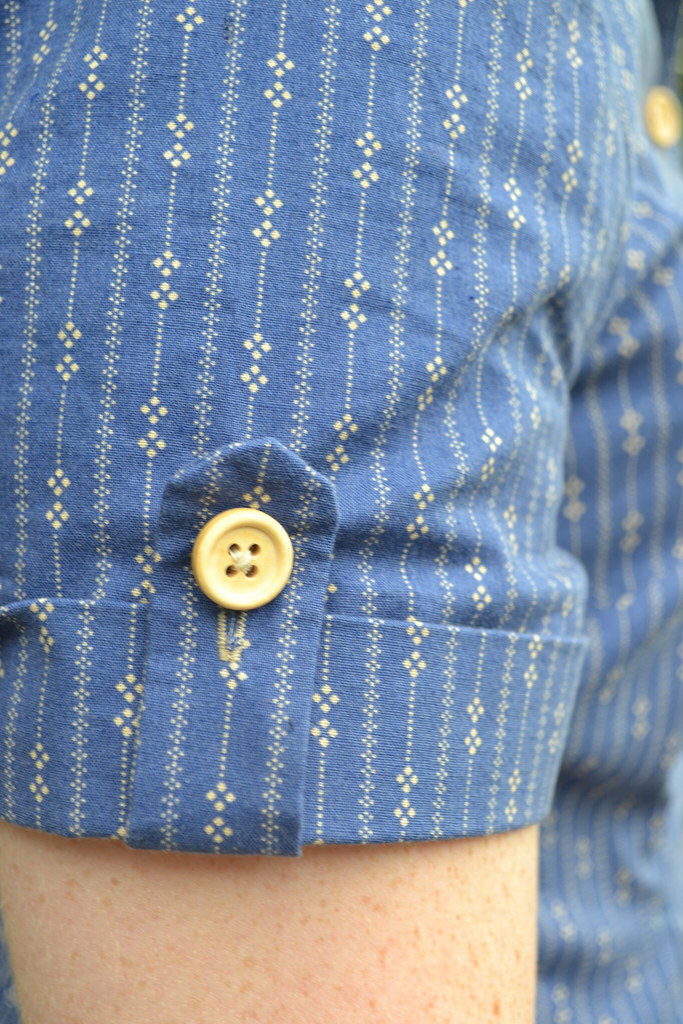 Speaking of pocket flaps… I took the standard Granville pockets, added 1″ to the depth to accomodate my phone and moved their placement from the chest to the thigh. I find this to be a much more useful and less awkward placement for the pockets when it comes to this dress. I also stitched the pockets using a 3/8″ seam allowance instead of the 5/8″ as drafted to better accomodate the width of my phone. 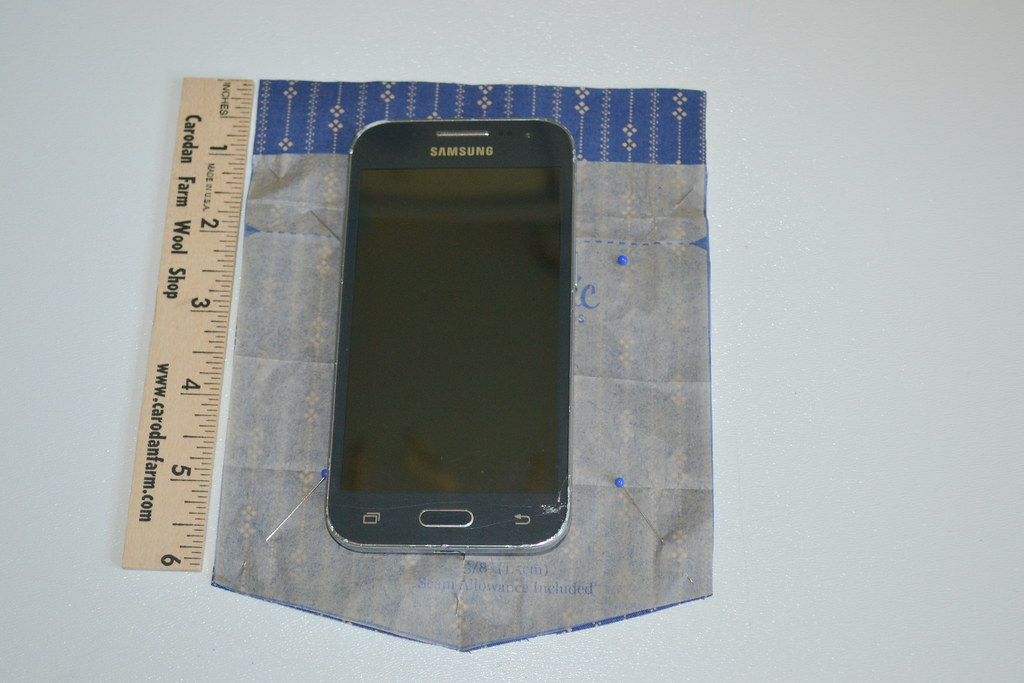 My other adjustment to the pattern was somewhat of a fitting preference, but involved so much effort, I’ll call it a hack. Once I had the dress mostly sewn, I wasn’t pleased with how loose it was around the middle. In shirt form, this much positive ease looked great but once this was transformed into a dress, it just cried out for more fitting so as not to look like a sack of potatoes. I tried it on, pinned out some vertical darts under the bust, through the waist, and down below the waist. After taking it off, I measured the pinned portion including their vague positioning and then properly measured out their placement so as to make them symmetrical. Here you can see the wash away marker lines that I drew directly onto the wrong side of the fabric to delineate my darts. 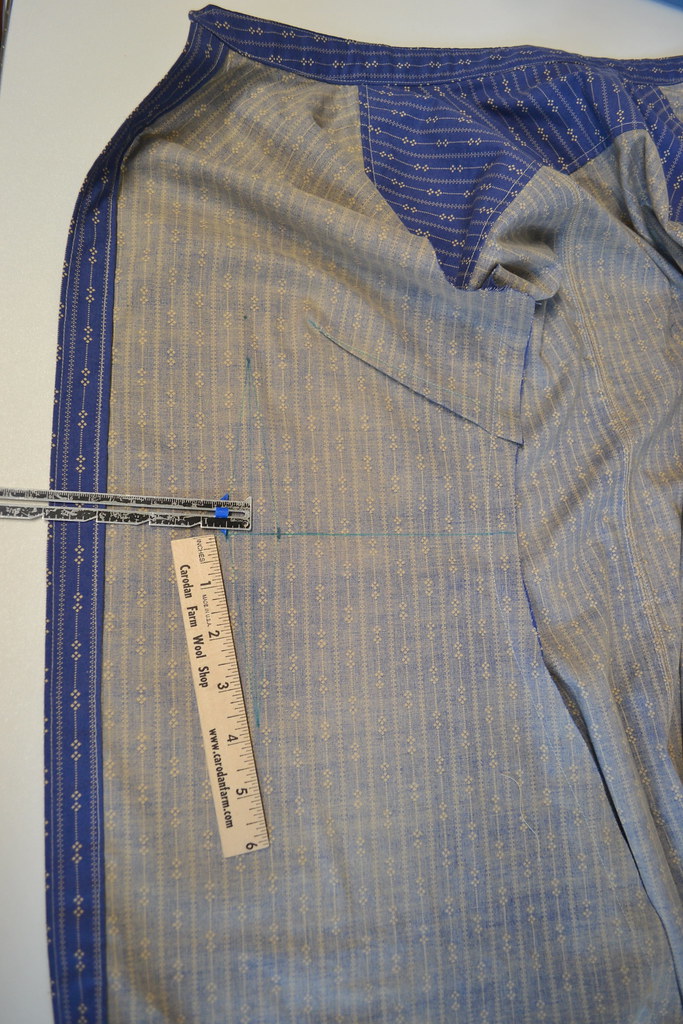 I later transferred these markings to the flat pattern for future reference. I wish I’d taken before and after dart photos to show what a tremendous difference they made in the fit but you can see in the profile view that it fits so much better. In future versions I may nip in the princess seams at the back for a better sway back fit but this time it was too late as they were already finished and top stitched. Now that I see the darts in photos I may consider top stitching them as well. They don’t seem to be laying down properly even after pressing. 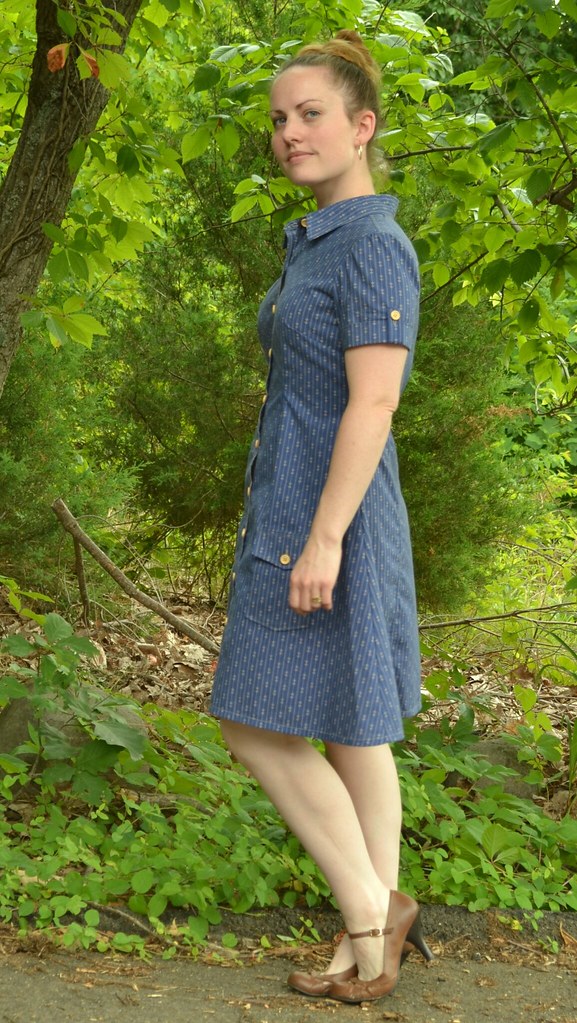 Should you be curious to copy my hack or a portion of it, here you can see all of my adjusted pattern pieces cut out. Hacked pieces are: front, button band, band interfacing, side back, center back, sleeve, and button tabs. Original pieces are: yoke, collar, collar stand. 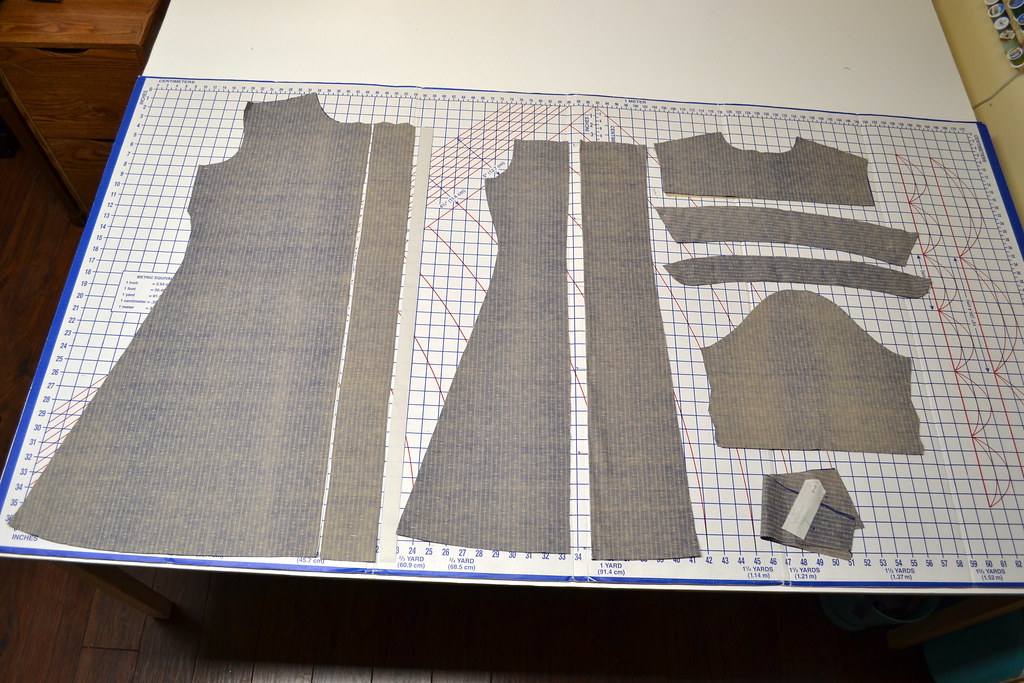 The button tabs are just haphazardly pinned to a scrap of fabric because I saved cutting those for after the sleeves were sewn up so I could perfectly match the pattern. I’m a little nutty about pattern matching. 😉 You may also notice that the pockets are not shown here because I decided to add them when I was about halfway through sewing the dress!

The only real challenge in hacking this pattern into a dress came with sewing up the shoulder seams. The pattern calls for an enclosed yoke which means rolling up the body of the shirt inside the yoke to stitch the shoulders. With all that length to roll up it was a tight squeeze. If my fabric had been much thicker I couldn’t have made it work as instructed. You can also see here that I added twill tape to stabilize the shoulders. This is an addition I make to nearly every top I sew so I often forget to mention it. 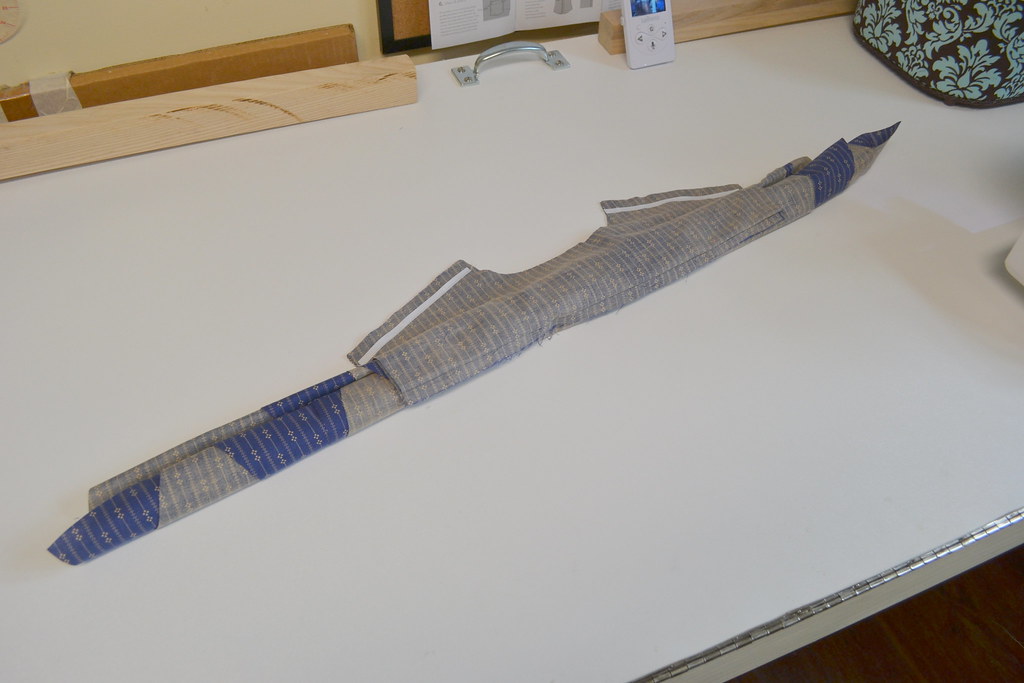 To finish the piece I went out on a limb and chose contrasting top stitching thread and wooden buttons that match the color of the print design. I’m still not sure I love the contrast but I suppose it works. I hemmed it up with self bias single fold hem tape. I posted a tutorial on hemming with self bias on my blog last week when I made up my linen Granville Shirt.

Overall, I love this dress. It’s so comfy and fits well. I’ll definitely make more Granville Shirtdresses in the future! 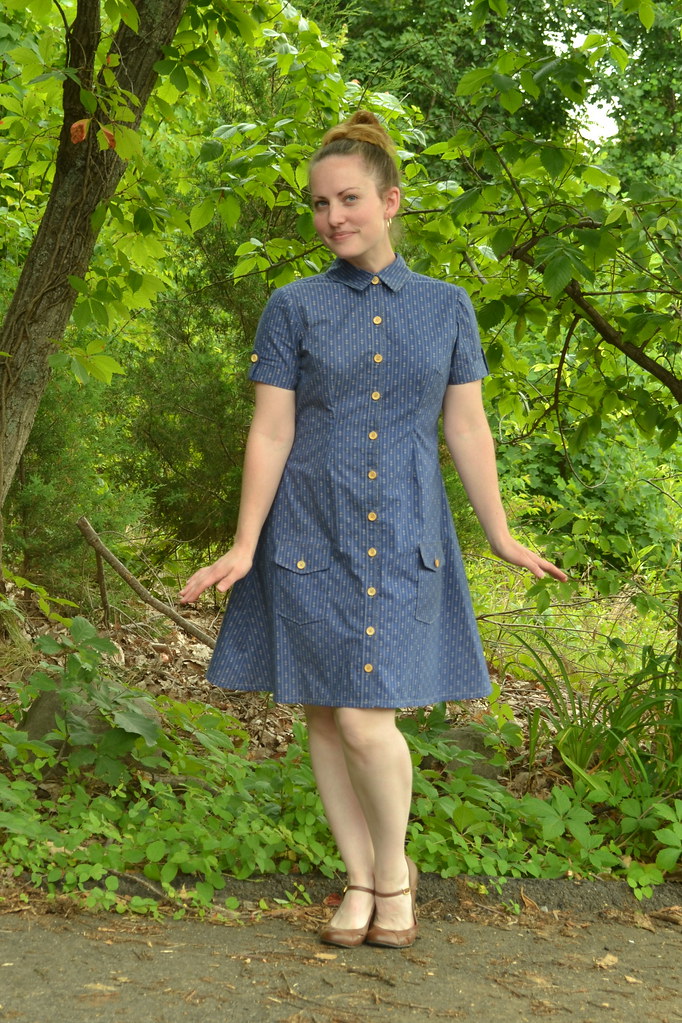 7 thoughts on “Hack It: Granville Shirtdress”