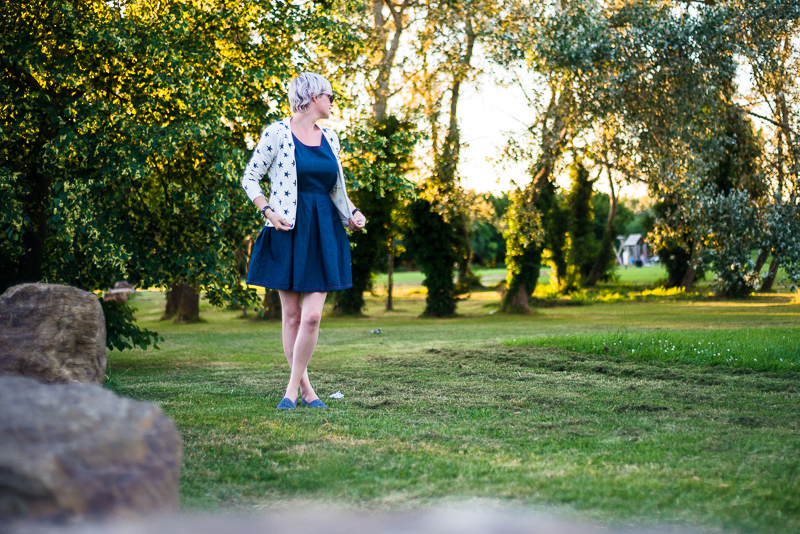 Of all the challenges in Indie Pattern Month, the Bundle Sale contest was the most difficult, for a range of reasons.

Firstly, because it required the creation of an outfit from a limited range of options.

Secondly, in the two bundles I bought I had 5 dress patterns, 2 trouser/jean patterns, a swimsuit, 2 ‘outerwear’ options (a jacket and a cardigan), and 2 tops. No skirts. To me; this makes for a distinct lack of separates that can work together.

Thirdly, I’m just not ready to attempt trousers yet. That’s something I’ll have to psyche myself up for massively.

Fourthly, lack of time and money meant I would need to shop my stash for fabric, thereby limiting my options still further.

And another thing (fifthly?) – no tried and true patterns here, by nature of the contest, these patterns were all new to me, and most of the designers were ones I was unfamiliar with too, meaning much head-scratching and second guessing of sizing and fitting decisions. I tend to find accuracy of the measurements provided on patterns varies, but rarely seems accurate on my body. Maybe it’s just me?

No skirts and not wanting to do trousers kind of ruled out the tops unless I were to do a top and jacket. I had no appropriate fabric for the swimsuit, which ruled that out, though it was the main reason for my buying the getaway bundle. Clearly, I would need to make either the jacket or cardigan and either a top or dress to go with it.

I decided to start with the Muse Sophie cardigan, as I was able to use the late arriving fabric I had intended to make one of my Astoria cropped sweaters with in week two.

I’m sorry to have to say this, but the Muse patterns have never appealed to me in the past, so this is not a pattern I would have chosen were it not bundled with other patterns I wanted. The example images of the finished items just look like the sort of thing my mum would wear. They’re just not me. I think it’s possibly the nod to vintage that turns me off. 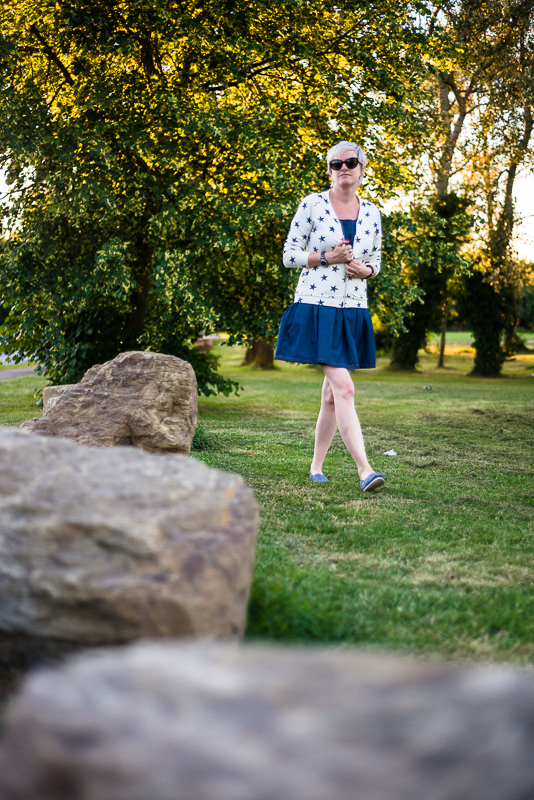 I chose to make the zippered V-neck variation, and cut a 34, grading out to a 36 over the bust. Depending on fabric, I’d probably go up a size all over next time. There are quite a lot of pattern pieces, so I thought this would be a time consuming make, but it really wasn’t that bad.

I was wary of the circular pocket openings and nearly went for the patch pocket as I thought they’d be fiddly but I forced myself to attempt them as I knew I’d prefer them to the patch pockets. Plus, I promised myself I wouldn’t take sewing shortcuts this year, and I’ve improved so much by moving out of my comfort zone occasionally. It shouldn’t be possible for a flat piece of binding fabric to sit flat when sewn to a curved seam, so I was expecting all kinds of ugly creases when I tried to press these edges, but it actually worked really well.

It has raglan sleeves, so inserting the sleeves was a total breeze. The instructions are very thorough and easy to follow, and I would say the pattern is probably suitable for an adventurous beginner or intermediate sewist, as construction gets a little bit fiddly when inserting the zip, neckband and zip facings and someone with limited experience might struggle a little here. 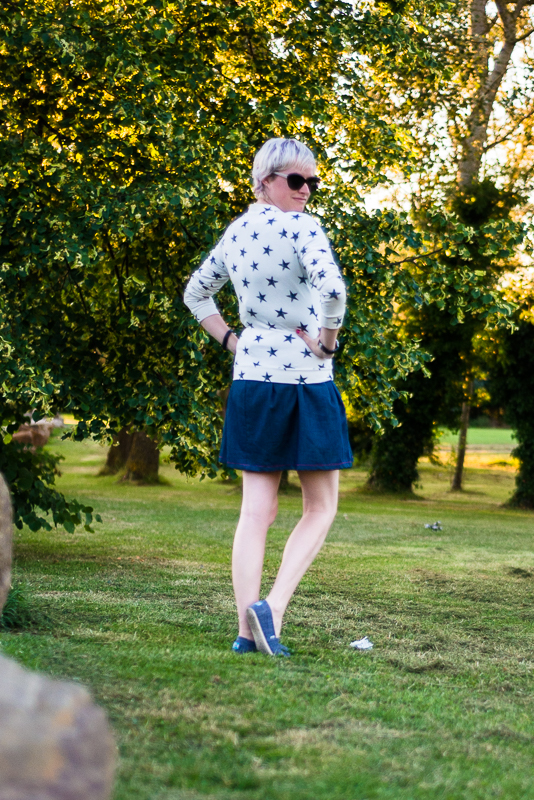 I made a slight error when inserting my zip as one side of the zip sat slightly too high for some reason, meaning it overlapped the neckband ever so slightly (and I really do mean a tiny amount). Not a problem, until I came to insert the facings and needed to turn the facing to the inside. It wouldn’t turn because of the zip and I had to unpick a little bit. Unfortunately, I couldn’t tell the thread apart from the zipper tape and ended up with a bit of fraying zipper tape sticking out at the top. It’s not hugely noticeable, except to me.

Despite my previous issues with this pattern, I was really pleased with my version and have worn it a lot since making it. It has also attracted the highest number of compliments ever, and my sister has requested I make one for her too. 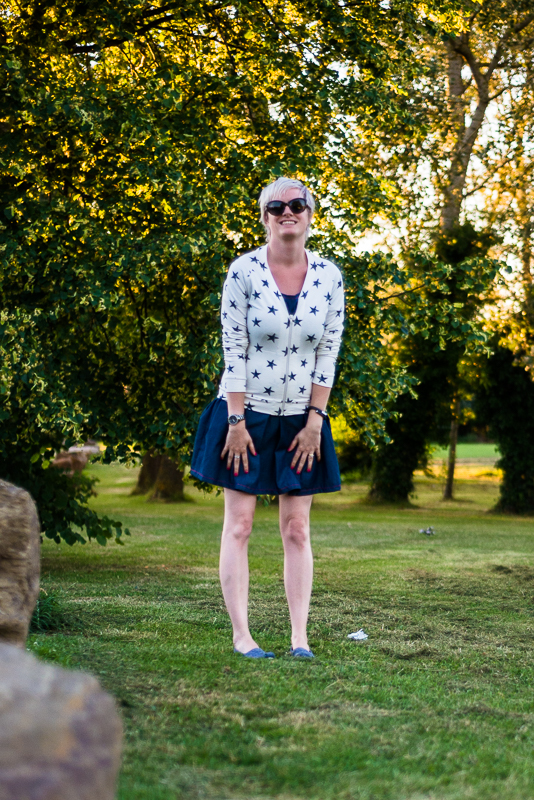 I will definitely make more of these for myself, as well as one for my sister, as it turns out it’s something of a wardrobe essential!

The details
Fabric:  Cream star print 95% cotton sweatshirting from MyFabrics, purchased in June 2016.
Notions:  Thread, interfacing and a open ended zip.
Pattern:  Muse Sophie cardigan, V neck zip up version in a size 34.
Changes made:  Graded out to a 36 at the bust
Another one/recommendations: Definitely! I’m totally converted.

To go with it I made a Zeena dress – version 2 (short-sleeves, scoop neck, min skirt), in a lovely soft chambray fabric which I bought at the Sewing and Hobbycrafts show at the NEC last year.

I have used a few By Hand London patterns in the past, and generally find that I can go down one size smaller at the waist than my measurements suggest.

According to my measurements I would need a UK 14 at the bust, 16 at the waist and a 10 at the hips. Since the dress is not fitted in the skirt, I disregarded the hip measurement, and based on the aforementioned theory about my waist measurement decided to cut a straight size 14.

The pattern suggests french seams, which is a good idea and would help to give a neat finish to the curved underarm seams. Unfortunately, I didn’t read through the pattern properly before I started, so didn’t notice this until I’d already finished my seams.

The fit of the bodice is really relaxed, using pleats instead of darts for shaping, which is a nice feature, but some advice on how to do an FBA on this style would have been helpful. Since there’s no sewalong for this dress, I’m on my own if I ever plan to re-attempt this dress.

*Edit: I’ve since realised there is a sewalong for the Anna dress, with instructions on how to do an FBA, and the bodice is probably similar enough to use the same method. Unfortunately the method does add a dart to the side seam, which will change the look of the dress, especially if using a patterned fabric.*

The neckline facings are not interfaced, and the pattern directions do not advise you to understitch, which seems like a bit of an over sight. I understitched them anyway, but they still didn’t sit nicely inside the dress, so after I’d finished I added a line of decorative top stitching which will keep it in place. This matches the decorative stitching I did on the sleeve and skirt hems too.

The most complicated part of this dress is the box pleats, so it’s a really simple make. I wasn’t expecting a pleat in the side seam, so I matched my pleats up wrong on my first pinning, but I figured it out in the end. The pocket being hidden inside a pleat seems a bit odd to me, but maybe I’m just being fussy. I guess maybe it would look weird if the pleats didn’t go all the way around?

Which leads me to my next issue. There’s no notch on the skirt centre back to show you where to fold the last pleat to, so mine ended up going into the seam allowance and got closed up when I inserted the invisible zip.

I had hoped to put in an exposed zip with metal teeth on a fuschia pink zipper tape, but couldn’t find one anywhere, so ended up putting in an invisible zip instead.

I want to love the finished dress but there are just too many fit issues for me really. It’s slightly short at the waist seam, so might be worth lengthening if I make it again, although this might be due to the need for a FBA. I think it’s probably fairly simple, and just down to adjusting the amount of fabric enclosed in the pleat, but I don’t really know.

I’d like to say that this is a dress I’d recommend for beginners as there are only a few pattern pieces and no need to insert sleeves, but I don’t really think the instructions are thorough enough and the issues with the facing and the pleat notches I mentioned earlier could make for some major frustration for a beginner.

, who am I kidding? I’ll definitely make it again, as I won’t be able to rest easy until I’ve fixed the fit issues. I do like it, but I don’t see it becoming a tried and true pattern any time soon. I’m going to ask my friend to try this version on as it might fit her better, and I’d like it go somewhere it’s likely to actually be worn.

The details
Fabric:  Denim Chambray from the Sewing & Hobbycrafts show, purchased in 2015.
Notions:  Thread in denim blue and fuschia pink and a 22″ invisible zip.
Pattern: By Hand London Zeena Dress, size 14.
Changes made:  Added understitching to facing, added decorative topstitching.
Another one/recommendations:  There will be another attempt in order to iron out the fit issues and then we’ll see.

As an end note, I’m in the unusual position of it being so flippin’ hot here in the UK that putting on a dress and cardigan for photos was a bit of an ordeal to be honest. It’s not often we get to complain/brag about our weather!!!