I was pretty excited to find out that the July challenge was ‘Spots and Stripes’, as I happen to have a bit of a thing for polka dots. Particularly black and white ones. I knew I had this fabric in my stash (about 1.5m of light stretch knit that came out of a remnants bin) and I had already downloaded the Lindy Petal Skirt pattern from Itch to Stitch, so after the sewing overload that was Indie Pattern Month it seemed like a nice quick make was in store.

That’s not really what happened, though. In fact I got half way through this project, got frustrated by it, and left it draped over the back of one of my kitchen chairs for two weeks before I forced myself to finish it. Although it wasn’t a hugely complicated make there were a lot of little niggly issues I encountered that dampened my enthusiasm for the project. I’m not very experienced working with stretch fabrics so I was being extra pedantic to make sure I didn’t mess anything up, and to be honest I don’t think this fabric was necessarily a great match for this pattern; it’s a bit too light and would probably have been better suited for a top, but oh well! It is also slightly see-though on the white spots, so I used some white stretch lining from my stash to line the back piece, as the front is already doubled up it didn’t need the extra fabric. It was pretty shifty to cut, and required quite a lot of pinning and fiddling about to get it to hold in place. I took and inch off the length and cut between a M and L based on the finished measurements, but then when I stitched up the side seams it looked huge. I tried it on and sure enough, it was miles too big. I ran the sides in a bit further but it was still too loose, and think this was the point where I huffed and puffed and gave up!

When I came back to it I did a more severe alteration to the side seams – I think overall I probably ended up taking several inches off before I was happy with the fit. Then I had to guess how much to take off the waistband and get it to all fit together neatly…but I got there eventually. I overlocked the internal seams and top stitched the hem with a zigzag stitch. The waistband is not particularly neat but it’s not too noticeable unless you look closely. I do wish I’d paid a bit more attention to the pattern placement on the waistband, but it’s not the end of the world. The final result is a wearable garment that I think is pretty cute, but I might wait until my mummy tummy recedes a little further before I wear it out of the house! 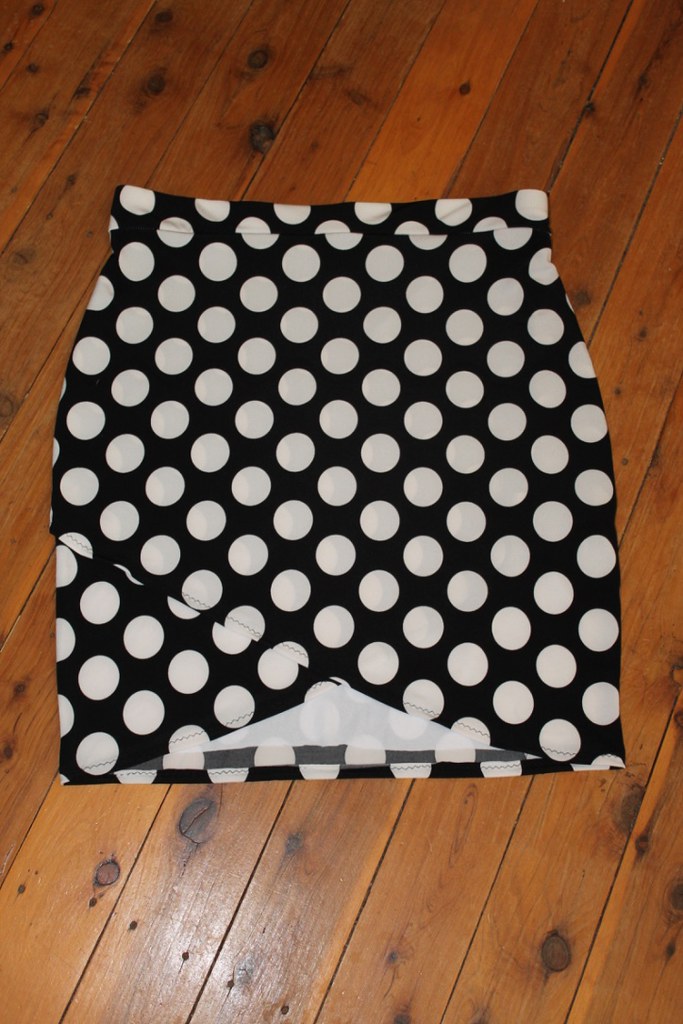 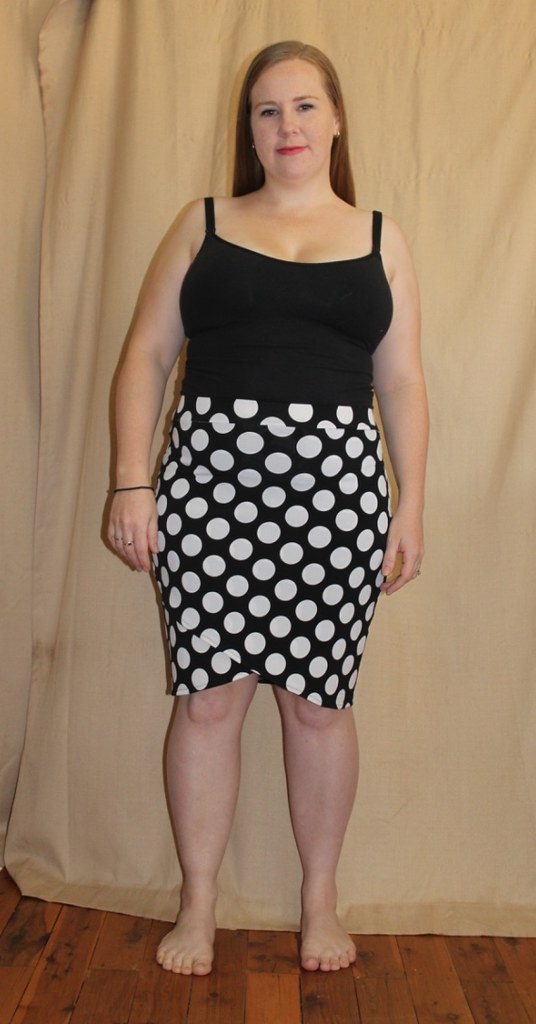 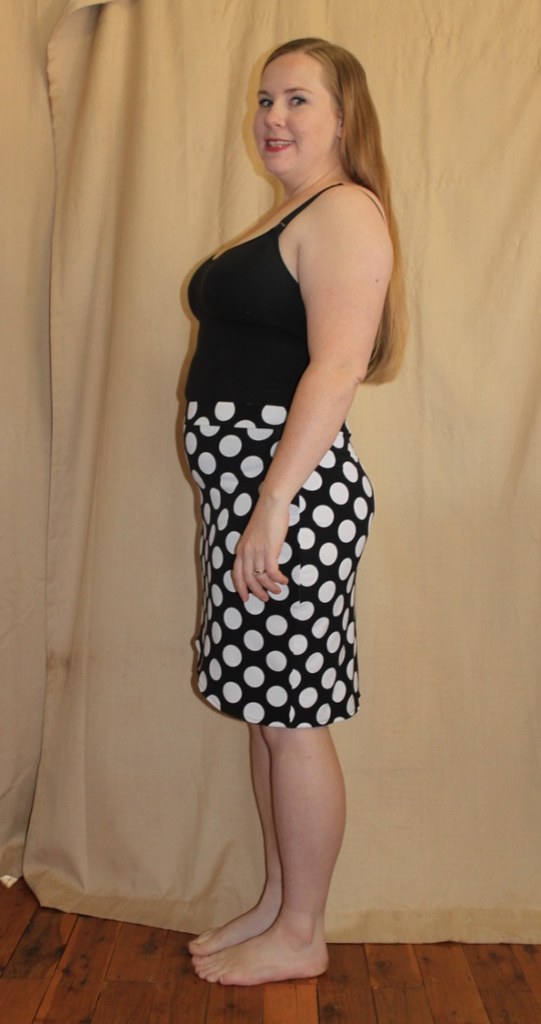 Although it probably doesn’t look too bad with a loose top over the top. 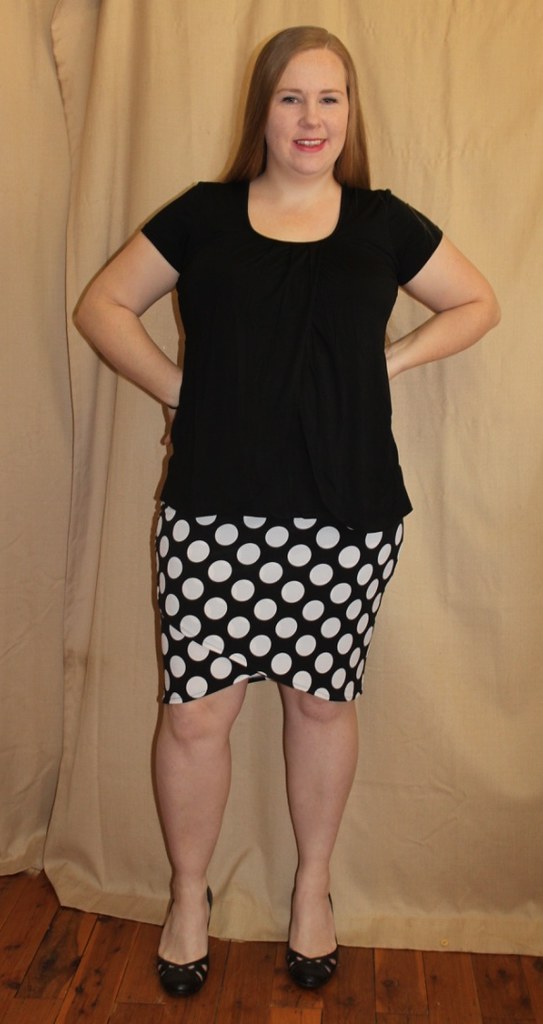 Fabric: 1.5m stretch knit from the remnant bin at Addicted to Fabric, around $15 from memory, stretch lining from my stash

Will I make the pattern again? Yes, probably with a more sturdy fabric.

So, the aforementioned ‘sewing overload’…
I made 4 garments for Indie Pattern Month, but only posted about one of them. I was so close to getting an entry in for the RTW copycat challenge – all I needed to do was hem the second dress, photograph them and write a blog post – but I came to the realisation that if I pushed myself to get it done by the deadline I was probably going to have a mini meltdown. For context: I’m the mother of a 3 year old and a 4 month old but have recently started working one day a week as a music teacher as well as running a community band. It was the last week of term and I was feeling a bit overwhelmed and run down and generally approaching breaking point, so I had to make the decision to step back from the sewing for a few days until I got a handle on things. I’m quite proud of the garments I made for IPM, even if they didn’t quite make it into the competitions, so I’d like to share them with you here. I’ll try not to waffle on too much as this is already turning into a fairly lengthy post!

Two of the garments I made were for the One Pattern Two Ways challenge. This one really appealed to me as I have a habit of making multiples – once I’ve got my head around a pattern I like to sew it up again while I’m in the groove. The pattern I chose was the Muse Melissa dress and blouse, as I wear a lot of dresses but also had a gap in my wardrobe for tops I could wear with jeans for teaching. I’ve had this pattern in my collection since it was released but this is the first time I’ve made it up. 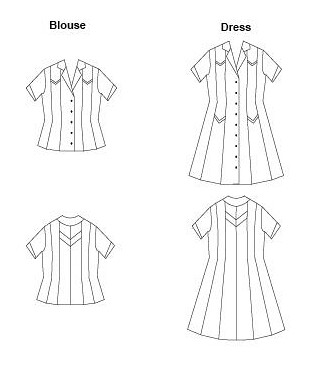 I started with the blouse, using a patterned rayon I had in my stash, and black rayon leftovers from another project as the accents. I did a quick muslin of the bodice to check the fit of the D cup version (the pattern includes options for B cup and D cup, so no need for a FBA!) and also took about an inch out of the length at the waist, as the pattern is drafted for 5 foot 10″ and I’m 5’2″. I did end up using more buttons than required as I wanted to avoid gaping across the bust, especially with the light fabric I was using. 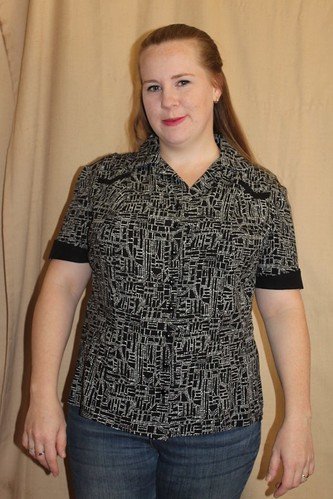 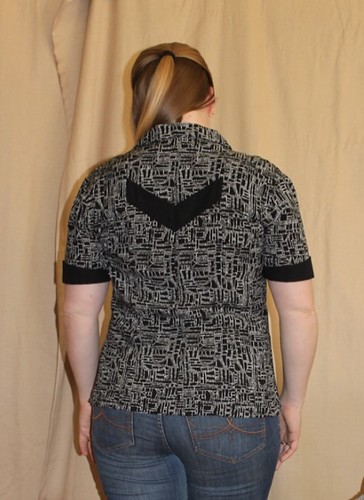 I found the main fabric I used for the dress in my local sewing shop. It’s a quilting cotton which I’m assuming is meant to go on the back of the quilt, as it’s 3 metres wide! I bought 2 metres but only used one for the dress. It’s hard to see from these photos but there’s a floral pattern over the graduating colours. The contrasting purple is also a quilting cotton, from Spotlight. I used it over self-cover buttons. 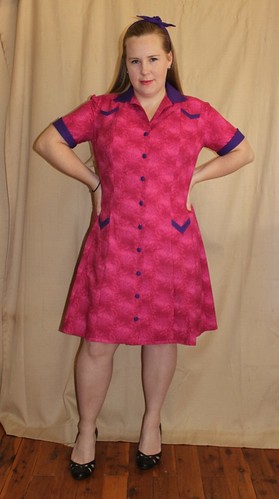 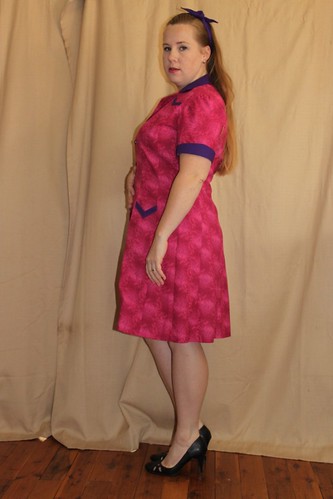 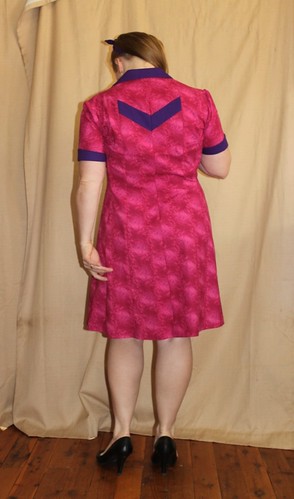 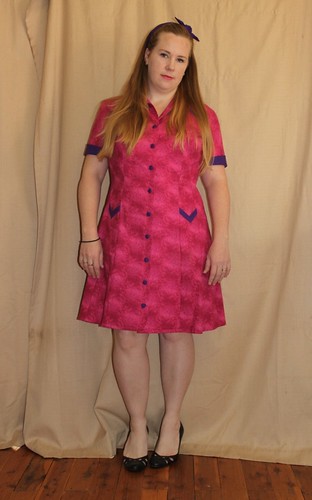 I used some of the purple fabric to make a matching headband. 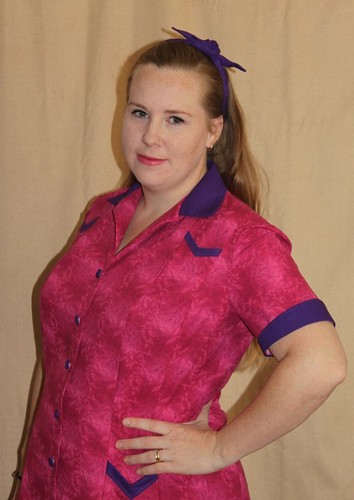 Will I make the pattern again? Yes

And onto my last make, the one that nearly broke me… 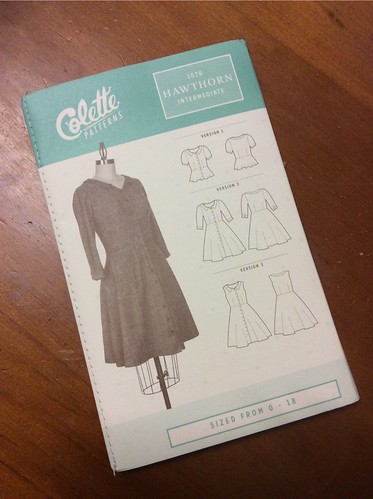 I received the Colette Hawthorn dress in the second round of pattern swaps, and wanted to make it up straight away. The week before I’d been in Spotlight and picked up some gorgeous deep red gabardine and matching buttons that I’d intended to use to make my Melissa dress, but then decided it had more drape than I wanted for that garment and used the quilting cotton instead. The combination of the deep rich colour of the fabric and the slightly more relaxed style of fit through the bodice drew my mind straight to this dress that I have pinned in my ‘RTW Inspiration’ board on Pinterest: So there was one garment of the RTW Copycat challenge sorted. For the other garment I was going to use a bit of artistic licence and link the Melissa dress to several dresses that inspired me to make that style. Less of a ‘copycat’, more of an ‘influenced by’.

I made the dress version of the Hawthorn with short sleeves. With the relaxed fit of the bodice I was able to get away with not doing a FBA, and I think the only alteration I made was to grade down a size at the shoulders. This dress came together surprisingly quickly – the collar was really the only part that took a bit of time. 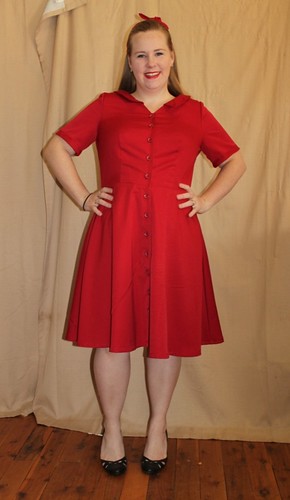 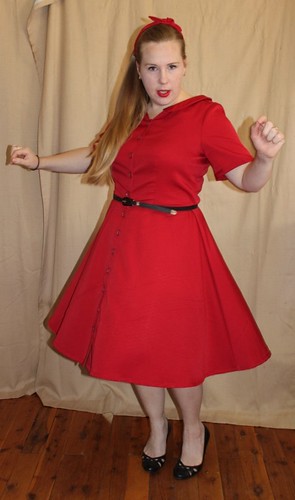 Fabric: Red Gabardine, 2m @ $5 a metre on clearance at Spotlight

Notions: 12 buttons $24 (yes, I paid twice as much for the buttons as I did for the fabric…), matching thread, interfacing

Will I make this pattern again? Yes, either a sleeveless version for summer or the peplum top.

Like I said earlier, I’m pretty pleased with what I managed to get done in the last few weeks. I’d been out of sewing for a while (being heavily pregnant/having a newborn will do that to you) so this was the motivation I needed to get back into it and fill some holes in my post-baby, pre-pre-baby body, breastfeeding mother wardrobe. I also managed to confront one of my weaknesses – buttonholes! I’ve made plenty of the suckers over the past month!

My husband took these photos for me and we had to take them inside as we’ve been having an extended wet spell here in central NSW, Australia. However indoors photography has its complications as well… 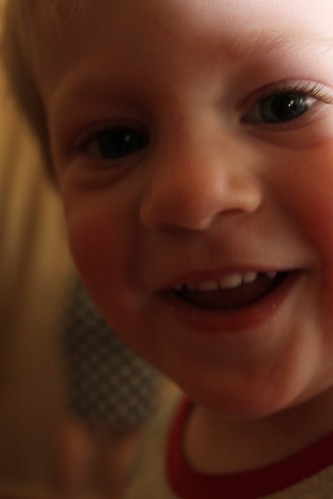 My little photobomber strikes again! And yes, he’s still in his pyjamas. I’ll leave you with some outtakes of him copying my poses! 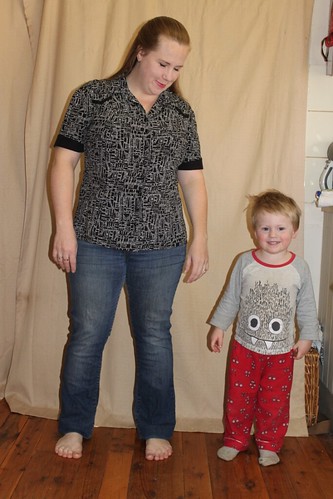 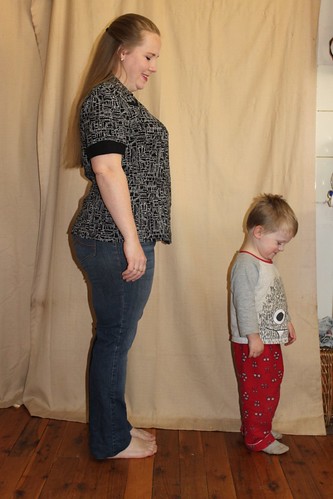 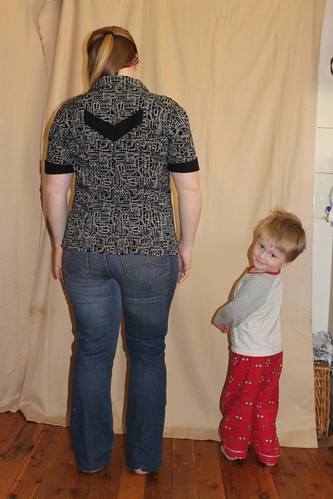 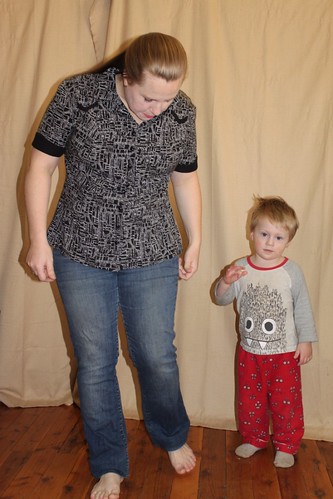 10 thoughts on “A Polka-dotted Petal skirt, and the makes that didn’t make IPM”