My first ever post for The Monthly Stitch, even though I’ve been a member since it began …  Lots of things have been going on in my life, including finishing my hand knitting City & Guilds (as well as working full-time) and getting married!  This dress has been on the go for some time now, but I can finally share it here in Frocktober.  Plans first formulated in my head during international pattern swap at Monthly Stitch, when I received the Sew Over It 1940’s Teadress.  I wasn’t sure that the shape of the dress was going to suit me at first but I thought I’d give it a try as my first sewing project for a long time.  I’d seen the perfect fabric for it at Croft Mill but couldn’t get my hands on it first time round.  I was lucky when they re-stocked –  it’s called, ‘The Girl with the Cherry Smile’ and works really well with the pattern.  My new sewing companion likes it too … 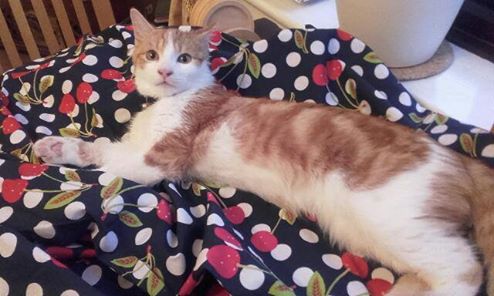 To ease myself back into sewing, I took my time and decided to enjoy the whole process rather than rushing anything, hence the tea and cake.  The pattern cover said that the dress was a close fit and as I’m between sizes at the moment I made the larger one.  This was a mistake for me – the bodice did look a bit loose on my new dress form, but as I hadn’t used the form before, then I gave it the benefit of the doubt. 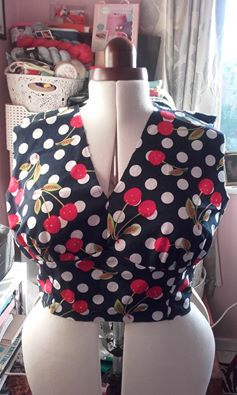 When it came to actually trying it on though, it was huge …  I actually ended up having to re-make the whole of the top section.  That was tiresome and tricky but I stuck with it and it was worthwhile in the end.  The second learning curve was the insertion of an invisible zip which I’ve never done before.  I found the zip in the right colour and length and was ready to sew it in with a machine foot I’d been given when I found the foot wasn’t compatible with my machine.  Aaargh!  My patience (and dress!) was nearly in tatters at this point …  I had to do an internet search and managed to find one for a couple of pounds that would fit my trusty 1980’s New Home.  I nervously fitted it when it arrived and my heart did a little dance when it worked!  I was very proud of my first attempt at sewing the zip in.

The rest of the dress went together comparatively smoothly, apart from forgetting to sew rear darts in the skirt section in my haste to get it finished.  I did unpick the skirt and included them though it was tempting not to.

A couple of months had passed and I was still doing the handstitching at the beginning of October on the facings and hem.  I had a feeling of triumph at finishing and persevering!

I wore the dress on my honeymoon on the Norfolk coast.  The weather was great for this time of year.

I am confident enough to make another of these dresses now, but I think I’ll try something simpler in the meantime to get my sewjo going again ….

12 thoughts on “The Girl with the Cherry Smile”