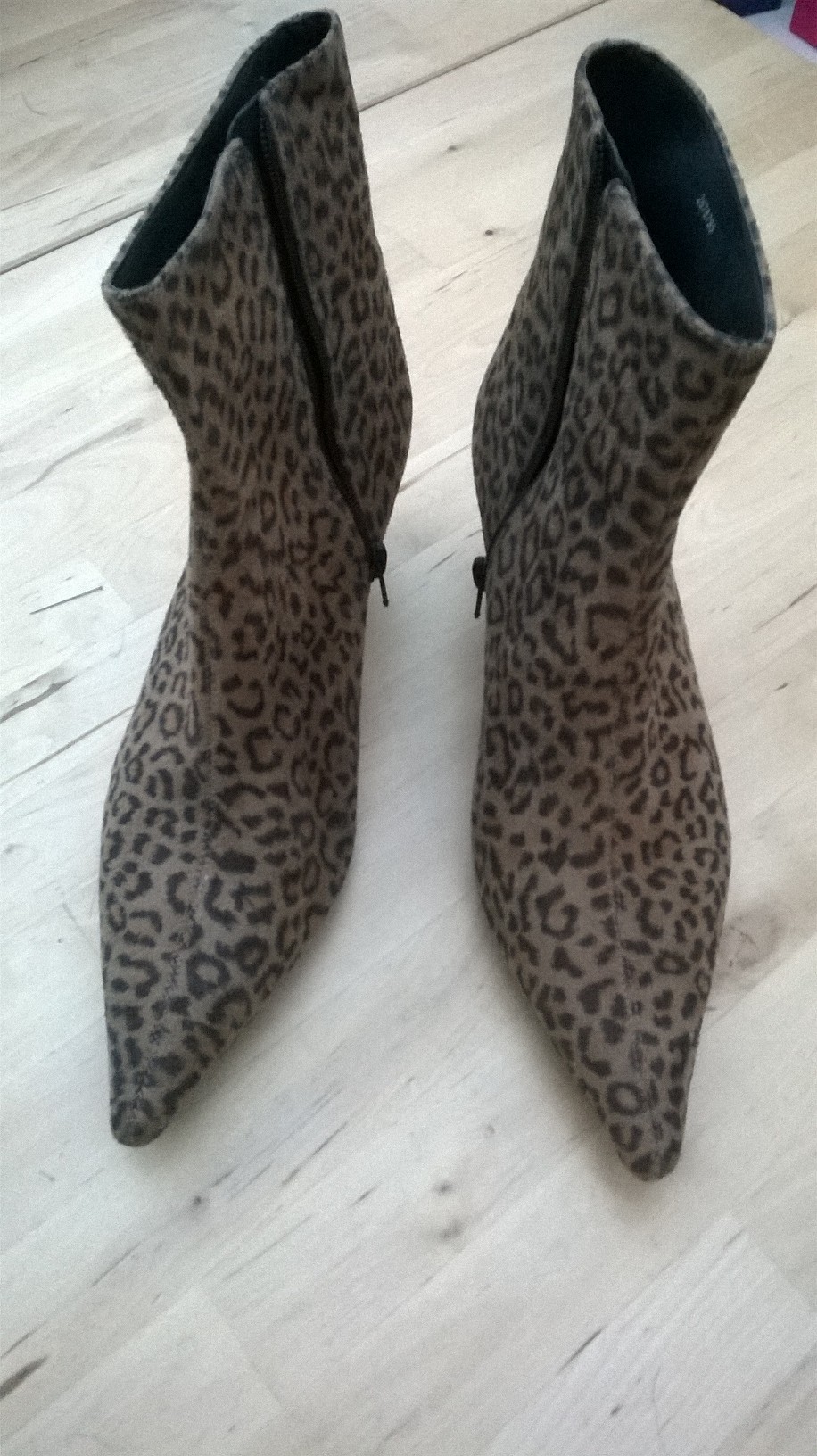 Well I just could not resist this months The Monthly Stitch Challenge. I just had to make something to go with these leopard print boots, I have owned them I believe for around 12 years and only worn once or maybe twice.

I had some difficulty deciding exactly what to make but in the end settled on this dress from Burda.  Its the: Long Sleeve Fitted Ruched Dress 02/2015 #124

The fabric is of unknown fibre but synthetic with lots of lycra. I think it came from one of my ebay buying binges. Its actually very thick fabric so was quite difficult to get the side-gathering to work. I did attempt to do the side gathers as the pattern says to but in the end I just pleated them. I think it works OK. I also added a stand up neck band like a Tshirt neck edge to the neck edge rather than just turning it over. 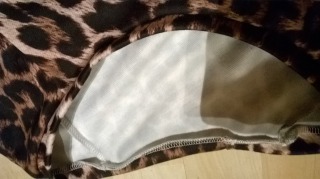 Not the best picture but this is my Tshirt neck edge.

It was all made on the overlocker except for the twin needle stiching of the hems. As it turns out I really love this dress. Its surprisingly warm. When these photos were taken it was freezing! Unfortunately because of the position of my house you can see a shadow accross the bottom of the dress. Sorry about that. Its all one fabric and is just leopard spots! 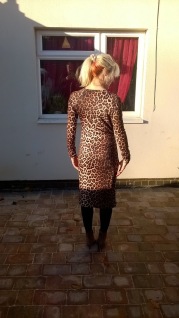 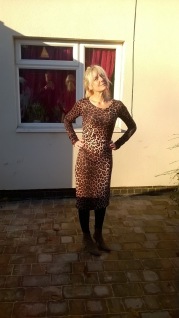 I do not usually go in for below the knee skirts. I only wear short above the knee or very long as in maxi-length skirts but this time I decided not to shorten this dress and to try it out just as it was designed to be. I have this idea I am unable to walk properly in below the knee tight skirts but as it turns out because the fabric is so very stretchy I can walk fine.

I made the second dress from the offcuts.

This dress is based loosely on a Burda paper pattern 7148

I added a black fabric due to not quite having enough of the leopard print one. The bits of leopard print also do not all have the same direction since they are just bits left over from my other dress. The black trim is some kind of stretch lycra, heavy weight, ribbed fabric (it was a mistake to use this as well!) that was in my stash. 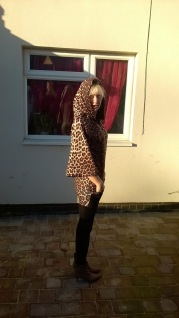 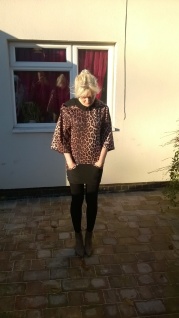 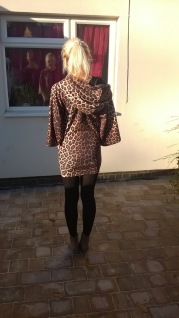 Well tbh it is really quite a disaster! I intended to make the top to wear with jeans or leggings, but found after sewing it all up with my overlocker (so there was no easy unpicking! ) that I had somehow actually made the dress. Not the end of the world that though.

So what is wrong?

I couldn’t understand the instructions so the neck does not look at all like the picture says it should. Mine has the hood attached to the neckline with an inner band made of black ribbed fabric. I did not bother adding a pull cord to the neck since everything else kind of went wrong.

The inner neck band was too big though so I added 1″ elastic. Its not tight even now but does not gape at the back the way it did without the elastic. The hood I lined with the same fabric as the neckband and the pocket.

Well, besides the print going in two different directions which is actually not really noticable probably to anyone but me, the neck gaping and me having to use elastic to pull it in, the pockets edges are not identical and the hood lining makes it a bit heavy.

Thats not actually so bad but it could have been better. The hood is not central on the neck edge – how I managed that I do not know because I definitely measured it all and pinned into place before sewing!

And finally the skirt is a little tight. Or perhaps figure hugging is the word I wanted.

Well its a nice little dress but really I was after a hoody to wear with my jeans or leggings. Never mind. Despite all these problems I suspect I will wear this quite a bit cos it has “something” about it I actually genuinely like.

It does go well with my boots too.

Sadly you cannot really see my shoes here in any of the photos due to very strong sunlight causing lots of shade but I am wearing them!

So I got two dresses for the price of one! 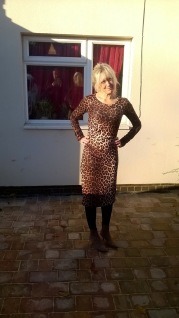 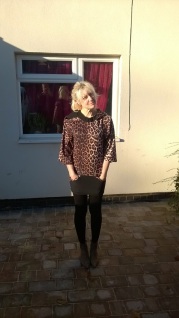 There is more here on my blog:
http://brackencrafts.blogspot.co.uk/
And finally, I have really enjoyed taking part in the November Monthly Stitch challenge.

2 thoughts on “Two Leopard print dresses for my lovely boots!”