The ‘it’ in the title being my son. My son has his annual cub scout holiday camp this weekend and they are having a fancy dress party on Saturday night. The theme for the fancy dress is ‘pirates’ but my son wants to go as Long John Silver’s parrot, Captain Flint (I had to Google the name).

It was quite a luxury to have a little bit of time to think and plan my strategy, but still I wanted it to be a quick and easy make. A quick trawl around Pinterest and I found a number of similar ideas. This is the image I settled on.

Now if you can be bothered to deal with numerous adverts, the make it and love it blog is brilliant for kid’s costume ideas. The parrot costume featured is really for a tiny person and my son is not that, but an image was all I really needed to get going with this project.

I bought half a metre of the yellow, green and blue felt from a local shop. The red felt came from a Little Red Riding Hood costume I made about 8 years ago and was no longer used. I measured my son’s arm span and made two wings out of red felt attached with a strip across the back. The wings are held in place with elastic loops. 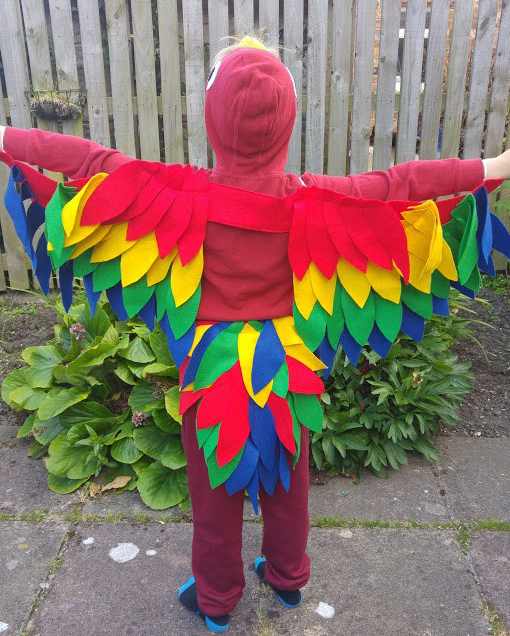 I thought the feathers would take a while but actually my rotary cutter made light work of that. I cut them out two at a time and in no time at all I had a tonne of feathers to play with. I still have some left! The feathers were arranged over the red wings, starting from the bottom, and sewn in place along the top of the feathers. The next row were layered up on top of these. I continued in this way until the whole wings were covered. 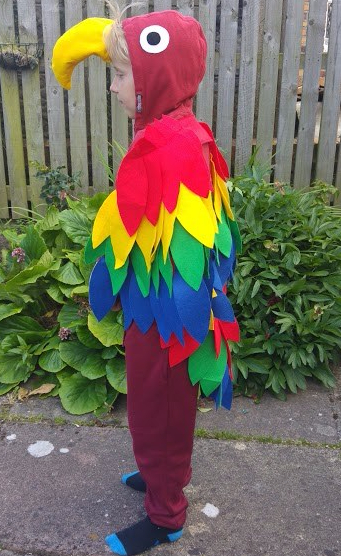 For the tail I cut out a tail shape in red felt and folded the top over to make a casing for some elastic. The elastic was securely stitched to make a loop that he can wear around his waist. The feathers were layered in much the same way as on the wings – although my son decided on which colour feathers went where on the tail.

The beak was made out of yellow felt and stuffed. I then added some thin elastic so that my son can wear it around his head like a mask. As he already has a red hooded top, I thought that would be perfect for wearing as a base. The eyes were sewn directly on to his hood using long, easily unpickable stitches!

So that’s the costume I made. I know it’s not the usual dressmaking project that appears on here but it’s the only thing I can fit in this month. I’m going to have to save my lovely flamingo cotton lawn (the only fabric in my stash that fits this month’s theme) for another day. If you have any ideas what to make with it (I have two metres and it’s 150cm wide) then please let me know because I’m drawing a blank. I am not a dress person really and I keep coming back to dresses.

I shall see you next month for the sewing frenzy that is Indie Pattern Month. I cannot wait!