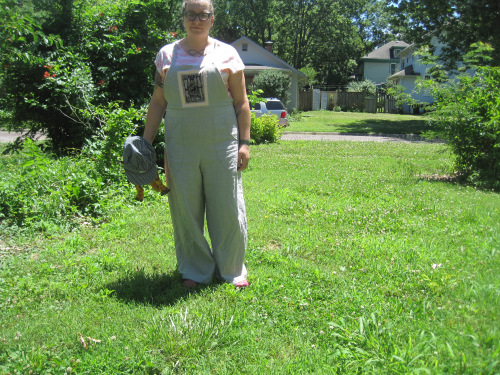 Of the three challenges we got to vote on for this month, “put a bird on it” was the one I most hoped WOULDN’T win. I am no fan of birds (never mind that my partner is an active birdwatcher), & you should hear what birds say about me. It’s like they seek me out to dive bomb me & attack me. I was once eating lunch at an outside table at a restaurant in Harvard Square, & this one pigeon came strutting over & just pecked me for the entire meal. I thought I was going to get bubonic plague for sure.

But, as always, the challenge forced me to sit down & think about it & this is what I came up with. You may think it’s a cheat, as the bird only comes in as a patch that I have had for years, but trust that I have been hunting for the perfect application for this patch for over ten years, & nothing seemed quite right until now. Without this challenge, the patch could have remained tacked to my corkboard for ten more years.

The garment is a brand-new pattern from Sew House Seven (one of the sponsors of the upcoming Indie Pattern Month, fortuitously enough), the Burnside Bibs. Fun fact: they are named after Burnside St. in Portland, OR, which is also the address of Powell’s Books, the world’s largest independent used & new bookstore, & where I worked when I lived in Portland in the late 90s.

I had earmarked this gray linen for a different fabric, & had planned to employ the bird patch in that project, but when I saw the Burnside Bibs, I knew they were The One. The word “hobo-riffic” comes to mind–in a good way! I had been thinking about making a pair of full-length overalls once the weather cooled off, but these were just begging to be sewn up in cool, breezy linen for hot summer days. I’ve barely taken them off since I made them.

The sewing was a lot of fun. The drafting is excellent, & the pattern requires enough “techniques,” so to speak (like darts, an invisible zip, facings, topstitching, etc) to keep things interesting without being overly fussy. I made a straight size 18 with no alterations & they are a near-perfect fit. 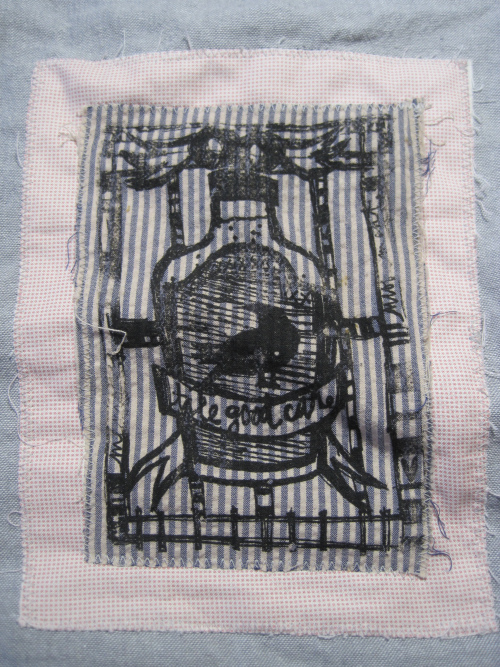 The patch was created by my friend Jessika Rae at least ten years ago. It features train tracks, a bottle, a crow, & the legend “take good care”. It’s printed on some incredibly elderly railroad stripe denim (of course–the traditional fabric of the hobo punk), which I sewed to a scrap of quilting cotton with a coral grid print that gives it the perfect dusty pink look that I love, & which coordinates with all of my clothes. I intentionally left the edges raw & zigzagged them in place to play up the hobo-liciousness of it all.

Thank goodness for that crow! I really don’t know what I would have done for this challenge otherwise. *shakes fist at birds*

You can read more at my blog!

One thought on “put a bird on some bib overalls”