Hi everyone! I’m so excited about participating in my second Indie Pattern month. I really enjoyed it last year and came away with so many lovely clothes, all of which are in regular rotation in my wardrobe. That’s got to be a good thing and I’m hoping it will be the same for this year.  Now I’m not normally a ‘dresses’ kind of person (although they are fun to make!) but there was one dress that I wanted to go back to because my first attempt had quite a lot of mistakes in it.

The pattern:  I chose the Cami dress by Pauline Alice. My very first Cami dress was submitted for a Monthly Stitch challenge a couple of years ago. You can read all about it here. I went for view A this time around.

Fabric and notions: I picked up the fabric recently at a car boot sale and it didn’t even make it to the stash. It’s a duvet cover that I picked up for £3 and it has cassette tapes and record players on it. 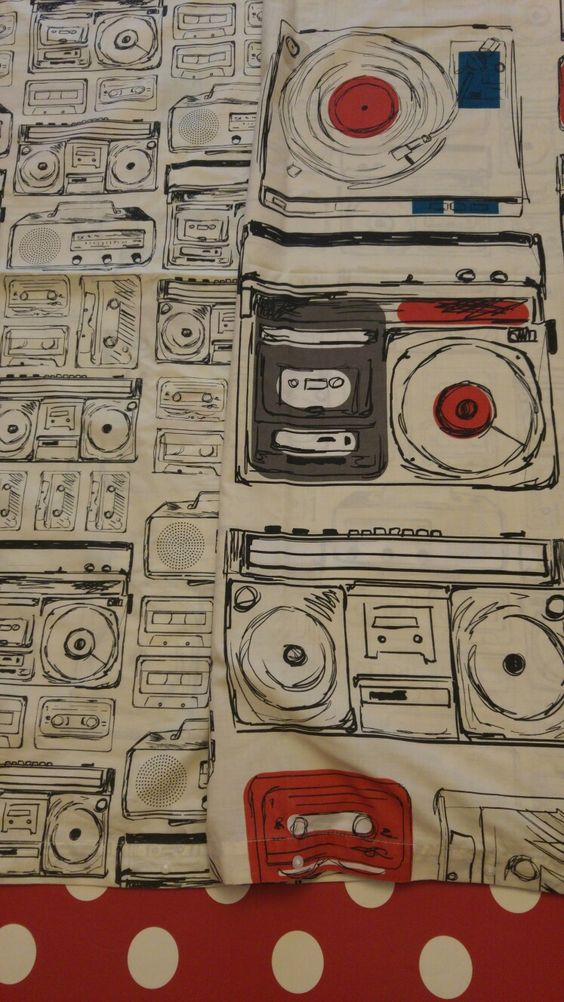 One side is just black and white and has smaller tapes and tape decks on it. This is the side I used for this project. The other side (on the right in the picture above) has larger record players on it and at first glance it looks as if it’s covered in boobs! I didn’t want to risk any dodgy print placement with this! I’m not sure what I’m going to use this side for – any kind of top is out! I’ll probably use it as toile fabric.

Like many duvet covers, it’s just a cheap polycotton but it sewed up well and pressed well. It also doesn’t crease too easily so this type of fabric is ideal for this kind of day dress.

Other notions included an invisible zip which I found in my stash. It’s not the best quality so I’m not expecting it to last. I’ve also used 7 buttons which were also in my stash. They came from a market stall in Amsterdam.

Alterations/design changes: When I first made this dress a couple of years ago I put in a lot of work to get the fit right. When I originally made a toile, it was far too tight although the fit was good through the back and the shoulders. There was just no way I could get my waist and boobs in there – it was far too small! The toile was a size 40 (UK 14). This was the only dress/top pattern that I’ve ever needed an FBA on. I worked out that I needed a good inch in the boob area.  The bodice pattern only has waist darts but carrying out an FBA created a bust dart. I’m sure there are ways of carrying out FBAs without adding bust darts but I don’t know them, and this worked for me anyway.

As you can see, the FBA I carried out on my last dress (which fits fine) is not quite enough for this one. Still a little gapey across the bust although that may well be due to the 3lb I put on last week! I’ll endeavour to lose the excess weight before I install an extra popper!

I also graded out the waist to a size 44 which is the largest size (depressing) and it’s still snug if I’m honest. The other change I made was to lengthen the bodice by and inch and in hindsight it probably didn’t need such a large adjustment but it looks fine.

The final alteration was to swap the gathered skirt for a pleated one. I don’t like gathered skirts on me. As already implied, I have a rather thick waist compared to the rest of me so I like to try and minimize it where possible. A gathered skirt does not do this! I also omitted the pockets. As much as I love pockets, inseam pockets just flap around in an irritating way once you’ve got your phone and keys in there so I’d rather not bother!

Other issues: The only thing I would say is if you are thinking of making this dress for yourself then I really recommend you do a toile of it first. Just the bodice and one of the sleeves would be fine. Compared to other patterns, this one comes out small. I found it small across the bust, small at the waist and tight in the arms (not enough to change the arms though!).

In summary: Being a shirt dress, this is a fairly involved project with a lot of steps. None of the steps are particularly difficult though. The pattern is rated an intermediate pattern which I agree with. That’s because you have a collar and stand to assemble, a side invisible zip and buttons and button holes. There are also sleeves to ease in. So not really a beginner make but definitely something to move on to if all you’ve done is sew basic garments.

I do like my new dress and I much prefer this shape to my original gathered skirt Cami. I also like the quirky fabric, and I don’t normally do ‘quirky’. I’m usually drawn to stripes or checks but I must admit that is was so nice not to have to pattern match.

I finished all seams on my overlocker but I think this project killed it. I think the knives are blunt from previous projects with thick fabric and it no longer cuts properly. The whole machine juddered when I used it on this project and it refused to overlock more than two layers of fabric. I’m waiting for the sewing machine repair place to get back in touch with me but it looks like I won’t be able to use it for the remaining IPM challenges which will slow me down. I’ll stick to woven fabric though (my sewing machine hates knit fabric) and we’ll see how I get on.

See you next time!