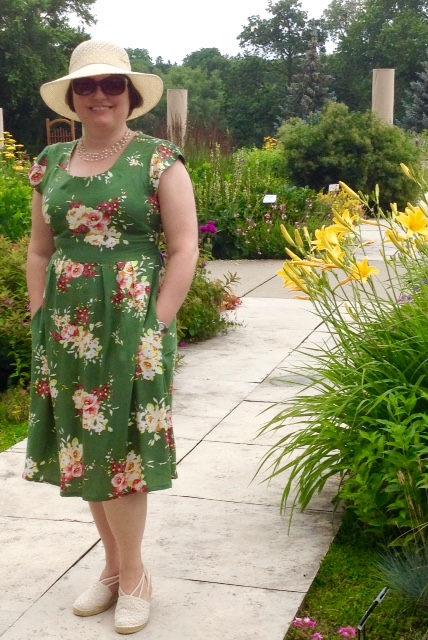 I’m late to the game with this week’s challenge: it took me a while to decide which new-to-me Indie pattern I’d use for this make. I have quite a few untried patterns which looked tempting and would be great to get sewn up.

But I finally decided on my Washi dress pattern. I’ve owned this for a couple of years and keep meaning to make it up. I’ve never tried a pattern by Made by Rae but when this popular dress took over the internet I bought the pattern with the best intentions. So the time is now!

I read a ton of reviews for this pattern, and came away with the idea that I would make it out of a rayon that I’ve also had in my stash for ages, since many people who’ve made it thought that the quilting cotton that it was designed for made the cap sleeves a little bit “wing-y” plus a stiffer fabric caused pregnancy vibe via the empire waistline. I wanted to avoid all this. I kind of did, but I do think that a bit of pregnancy vibe is unavoidable with this design. 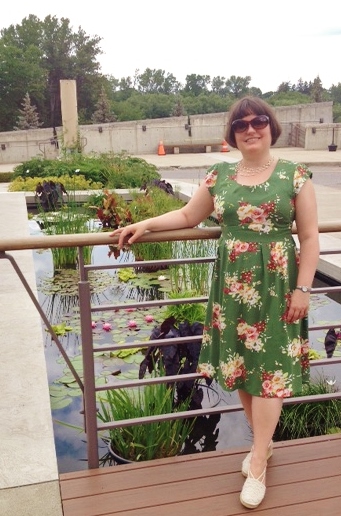 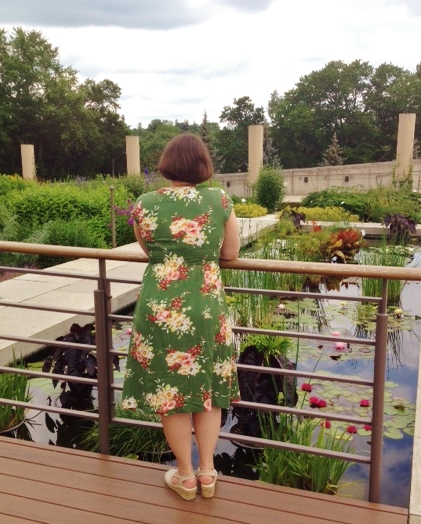 back view with waterlilies

In any case, I lengthened the front bodice by an inch to further reduce the maternity look, something recommended by a few other bloggers. I also lengthened the skirt about an inch to give me room to play with hem length. In the end I liked the balance of the longer skirt so much I just narrow hemmed it and kept it longer and flowy. I also used self-bias for the armscye finish, as suggested. I considered using a vintage green bias tape but the weight wasn’t quite right so I just made my own from the leftover bits of the fabric. Unfortunately it’s so lightweight that the hand stitching to fasten it down started pulling on the threads — thankfully I’d started at the underarm — so I switched to just ironing it down with a bit of stitch witchery. That didn’t work 100% perfectly but better than the stitching did.

attempting to show that you can see the bias line…

I didn’t do too many alterations besides lengthening the bodice and skirt, other than deciding not add the keyhole slash at the neckline. Since I was using a soft rayon, even with interfacing it would have been too floppy with a cutout. I cut the rounded neckline higher by about 1/2″ and took in a 1/2″ wedge out of the right side (my usual alteration for my uneven shoulders). 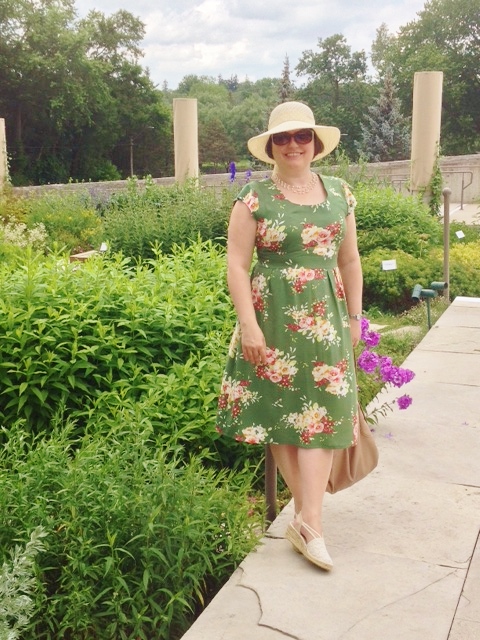 I learned a few new techniques with this dress, too! I love pockets intensely but had never tried cut-on pockets like this pattern includes. I like it — makes it quicker to cut and sew. But I’m still not sure I like the way they hang inside the dress or not…will take a few more wears to be sure about it! The major new thing I tried was the elastic shirring at the back waist. I have lots of elastic thread but in all the years I’ve been sewing I’ve never tried this. It was so easy! And I love the effect — it’s my favourite thing about this dress 😉

The only drawback to this project is that the rayon was not the best quality, even though it looks so pretty. I think that while I was steaming the elastic shirring after sewing it, the rayon also shrunk a bit more. Thus when I am wearing this dress, it’s a bit tighter around the midriff than planned for when measuring and cutting in the first place. Oh well, it forces me to have good posture! It also creases almost immediately from sitting or slouching. Yikes.

Anyhow, I had a lot of fun figuring out how to make a Washi from this kind of fabric and really love the lines of it and the flow of the skirt. Finally, the nudge I needed to try this popular pattern by a company that is new-to-me only in the actual sewing part of things, a company I’ve been following online for a long while and have been intending to try for ages and ages.

I headed down to the gardens outside our Festival Theatre for some photos – lots of beautiful flowers, statues, and the fading remnant of a giant flag painted on the ground for Canada Day last week! Happy Canada Day – and Indie Pattern Month!