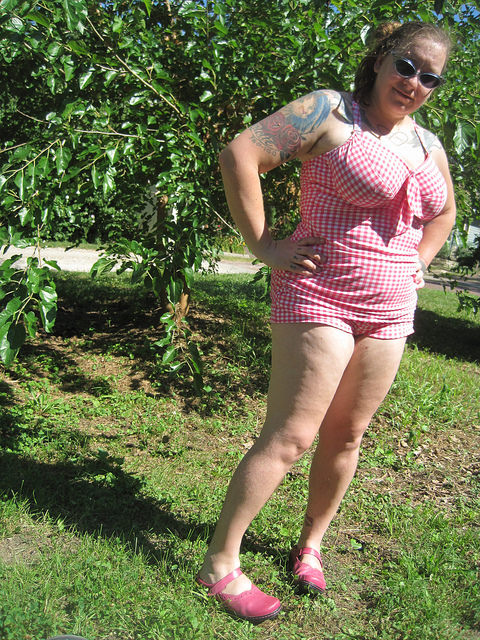 For this challenge, I dove in (see what I did there?) & hacked myself a new swimsuit. I’ve sewn a few swimsuits, but never using an actual swimsuit pattern. A lot of swimsuit patterns have the same flaw as RTW has for me: not enough support up top. So I went all in & hacked this tankini top from a bra pattern: the Harriet bra from Cloth Habit. It’s a full-band style with a balconette, three-piece cup. I build a foam bra into all of my self-sewn swimsuits, but this is the first time that I kept all the bra styling for the exterior of suit as well.

The Harriet bra isn’t a foam cup bra, but it was easy enough to do the conversion. I added 1″ of height across the cup & frame to add more coverage. The Harriet bra is pretty low-cut, which isn’t really the look I want to rock at the wading pool with all the other preschool moms, you know? I cut cups & frame from my gingham swim fabric,  & then eliminated the seam allowances where the cup pieces join together & cut these pieces from foam. This is because you can just join the foam pieces by butting them together & zigzagging across the join. That way you don’t have bulky seams with two layers of foam.

I cut the internal frame from very firm powernet, though I prefer Duoplex for bras. Powernet doesn’t offer the level of support I’d want for, say, playing beach volleyball, or running across the sand in slow motion. But it gets the job done for just lounging at the pool, & has a little more give so I can wiggle into the suit with no need for a closure.

I layered my gingham cups over my foams cups & topstitched the cup seams. I basted a gingham frame to the powernet frame & set in the cups, just like you would with a bra. I added channeling, wires, & firm band elastic along the bottom edge of the frame, & voila: I had my pool-ready swim bra. I chose to add it to a ruched tankini top, which I just drafted from scratch. My straps are just two tubes of fabric with straps elastic threaded through. I’m obsessed with cross-over straps, so I cut them long enough to achieve that effect.

To cover up my bartacks from attaching straps & channeling, I added a cute little tie detail to the center front & some decorative buttons to the straps.

I decided to make swim shorts instead of traditional swim bottoms. It would have been easy enough to adapt the bottoms from one of the cute underpants patterns out there, but instead, I used the Closet Case Patterns Ginger jeans as my base! 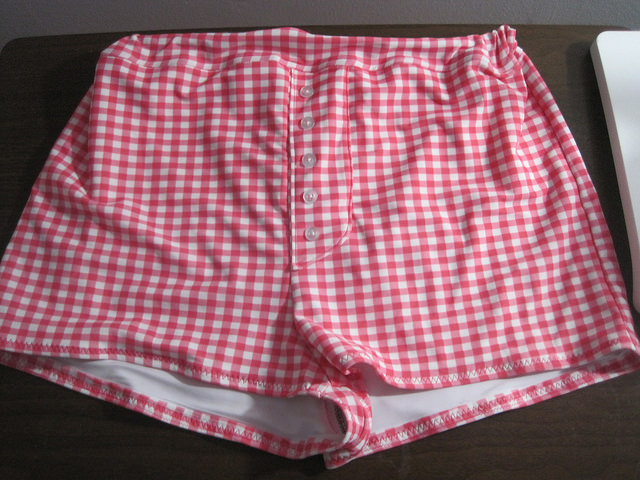 I’ve seen several blog posts from people who attempted to hack the Ginger pattern into shorts, but it never works that well because the Gingers are fitted with negative ease. That is great for skinny jeans (& swimsuits!), but I personally prefer my shorts to have at least 1″ of positive ease (the equivalent of a fitted skirt waistband). Think form-fitting, but not squeezing.

I traced off the front & back crotch curve of the Gingers & extended the rise to my natural waist. I ignored all the shaping for the fly, because I obviously wasn’t going to sew a zip fly into a pair of swim shorts. I just continued the line of the crotch curve instead. I gave myself a 2″ inseam–I wanted my shorts SHORT; I didn’t want anyone thinking I was wearing bike shorts to the pool. I drafted a rectangle for the waistband & used the Ginger pattern fly piece to whip up a mock fly, which I just topstitched in place & adorned with buttons that match the buttons on the top.

The suit is fully lined & has already been pool-tested & -approved. Because it’s hacked to my exact measurements, it fits me great. My dress form, Miss Mackrelmint 1942,  on the other hand…She’s a B-cup & I’m…not. (I made the swim top from a size 38E.) She also doesn’t have legs, so I had to pin the shorts in place. She is 75 years old though, so I’d say she looks pretty great for her age, legs or no legs.

My four-year-old took the photos. She got some good shots & also a few shots of the neighbor’s recycling can in the alley. She also got some not-so-great shots of me & these random women at the pool who dragged their pool chairs into the zero depth area, crowding out small children. Our local pool doesn’t have any wave actions or anything. There’s really no reason for them to have done that, aside from just thinking they’re more important than everyone else. The pool had an unusually high number of completely oblivious yahoos yesterday. It was only my lightning quick reflexes that prevented me from getting hit in the face with a football.

You can see more of my sewing & read more details about the construction of this suit over at my blog! (Eventually. I haven’t written up a full post yet.)

14 thoughts on “I came here to tell you, these beach bums is bums.”