Okay really though, if that weren’t a quote related to this post, those words would never pass my virtual lips. I have far too many hobbies. 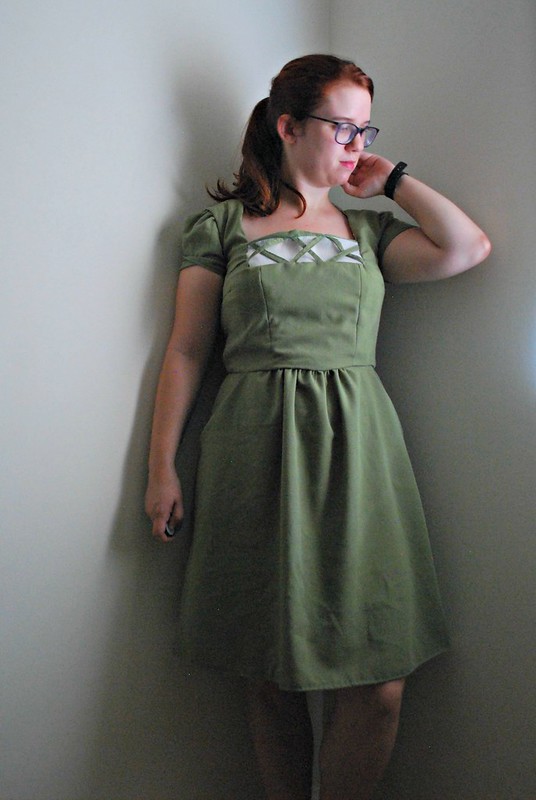 I’ve been super busy all year but it picked up right before this IPM, so this is my only contribution this year, which actually completes the cycle from last year’s!

So last year, I won a prize pack for my Hack It post, and as a part of it I received the Deer and Doe Belladone dress which I’ve been admiring on the internet for years, but paper patterns are not wallet friendly for me right now.

Over last winter I made two dress versions and a skirt one. Of course I haven’t blogged them yet, **cough** procrastinating in different ways right now **cough**, but they’re pretty awesome.

This year I’m attending a geek convention, and as a sewing oriented person I’ll be attending in costume, but I also want to make the costumes. So most of the costumes involve some amount of pattern hacking, since the patterns are rarely close enough to get the job done.

Peggy Carter (from Captain America and the Marvel Cinematic Universe) is probably one of my favorite characters ever. She’s strong and passionate, and knows what she wants. And she could do with a hobby… (Okay, its a joke about punching all of Hollywood because of racism)… Especially in season 2 of Agent Carter, her wardrobe is gorgeous and full of lovely 40s dresses which are so pretty and I want all of them. 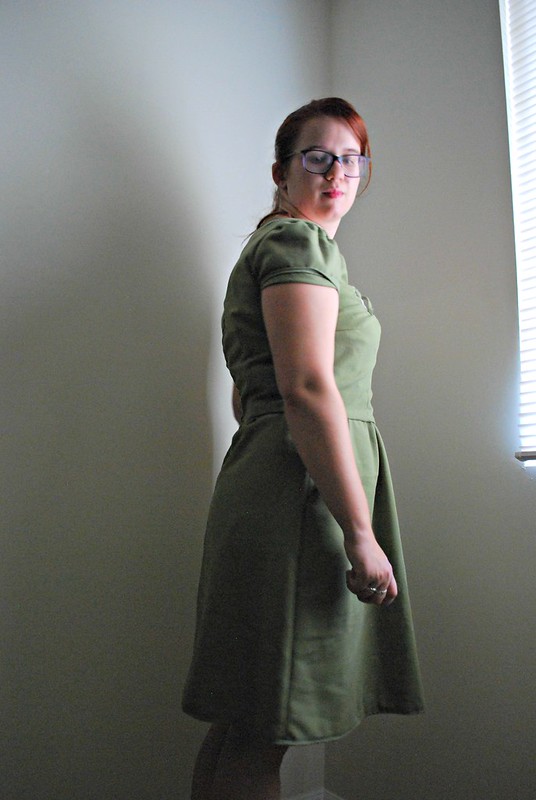 So this is the D+D Belladone hacked into a Peggy Carter costume muslin. Now, because this is a wearable muslin (which I have worn and its swing dancing approved), it’s a) not purple, and b) not exactly the final dress yet. I need to add the sleeve details, and remove the excess that I gathered in the front, but I’m nearly there!

In order to accomplish this, I had to hack the pattern a good deal. The neckline detail is a separate piece, such that the bodice that I patterned involved lowering the neckline so low that the lower bodice dart was supposed to end right below it, so I instead cut the bodice into three pieces to avoid a weird pucker (center front and the two sides). I considered sharing progress pictures until I realized that it would be indecent. Heh heh. Moving on. 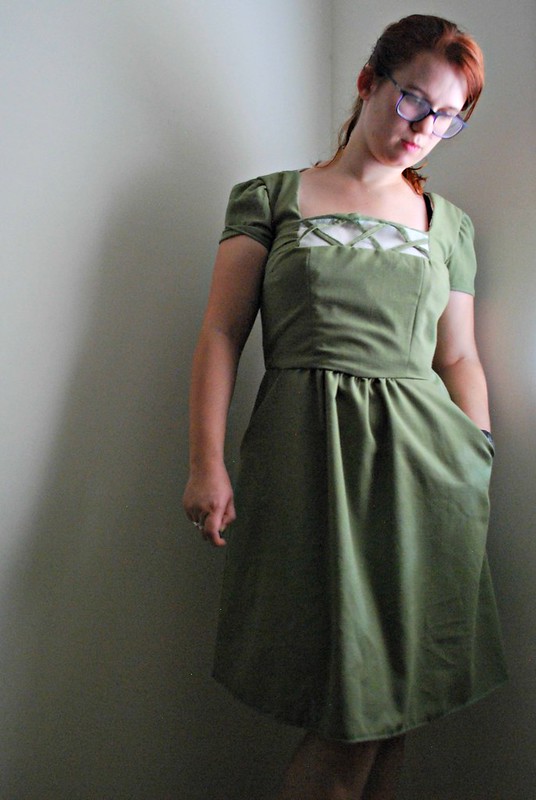 I also didn’t want the side bodice darts to end at the neckline detail, so I followed in the footsteps of Karen and did a double dart alteration (though mine was a bit more squishy since I wasn’t in an internet accessible location), so that the dart could be shorter and smaller.

Since my inspiration dress doesn’t have a separate waistband piece, after I made all the other bodice changes, I added two inches to the bottom of the bodice to make up for the lack of that. I didn’t have the entire pattern handy, so I didn’t check how wide the actual waistband piece is, but this lengthened the bodice plenty, so it fits exactly where I want it to!

There also is that sleeve thing… Belladone doesn’t have real sleeves, and I needed some. I had never made the full length back bodice, so I took this shirt pattern I drafted last year and mashed it in, which also took into account my bad posture and therefore very rounded back. It essentially added an inch or two of room in the upper back, reshaped both armscyes, and added a dart to the shoulder in the back. And a sleeve. 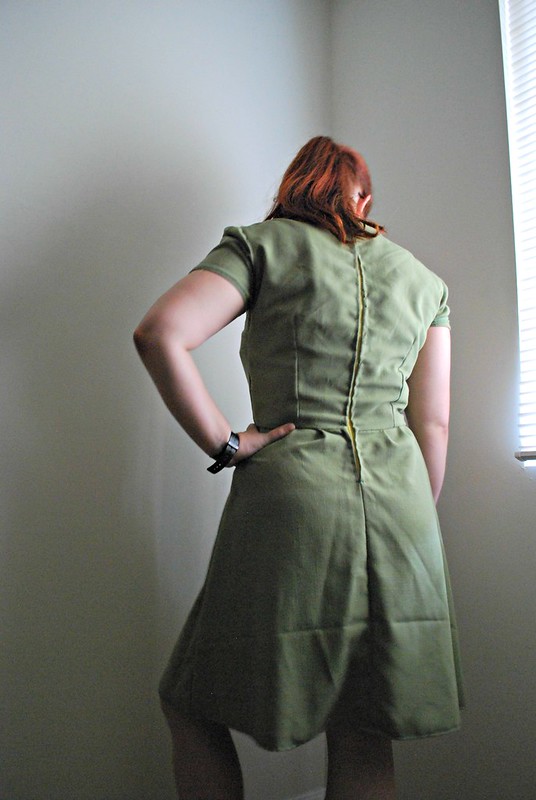 The other thing is that Peggy’s dress doesn’t have a lot of extra volume in the bottom, so I decided to remove both the tucks in the front and the darts in the back. The front tuck removal was intentional, and turned into the gathering into the center front panel, and a lot of this volume will be removed in the final product. The back darts will be returned in the final dress, since it really does help the shape. I had to add tiny darts back in, since I did an on the fly swayback adjustment.

The neckline detail that I made here is definitely an in progress piece, which I made while it was attached to the dress with much seam ripping, and is essentially some sheer curtain fabric with crisscrossing strips of self fabric, The top strip I attached almost like piping with the lining behind it, so its not as sturdy as the rest of the pieces. And I hand sewed some polyester lining to the entire bodice, which also lined the back of the neckline detail to hide my bra. 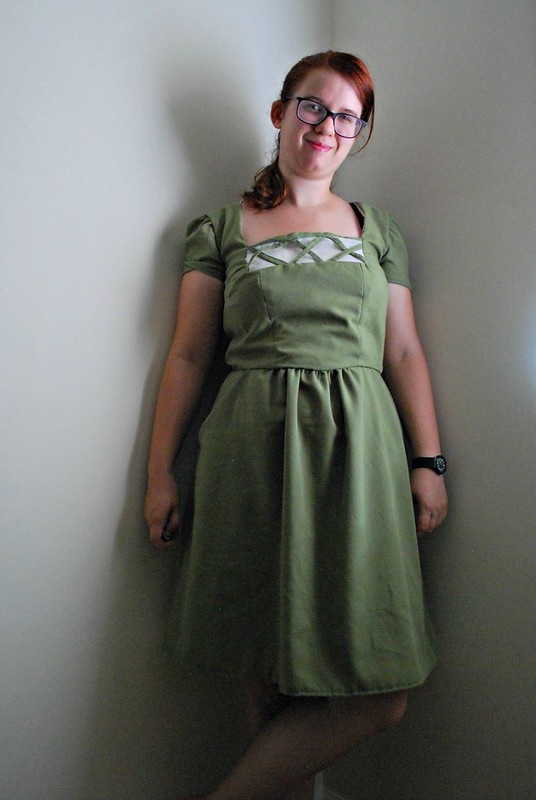 For the record, polyester lining fabric is not swing dancing sweat approved.

Pertinent details: Mystery olive woven from Hancock’s (RIP), which feels like linen, but I don’t actually know what its made of. Banana yellow zipper since I broke both of my long green ones. Hacking/Making of this spanned 3 days.

Verdict: Comfy, but the lining needs to be changed to something breatheable. And pockets are wonderful…

So that’s my hack for this year’s IPM!

Keep up the good work everyone! Us lurkers love to see the awesome garments!

(If you want to see more of my makes, check out my blog here!)