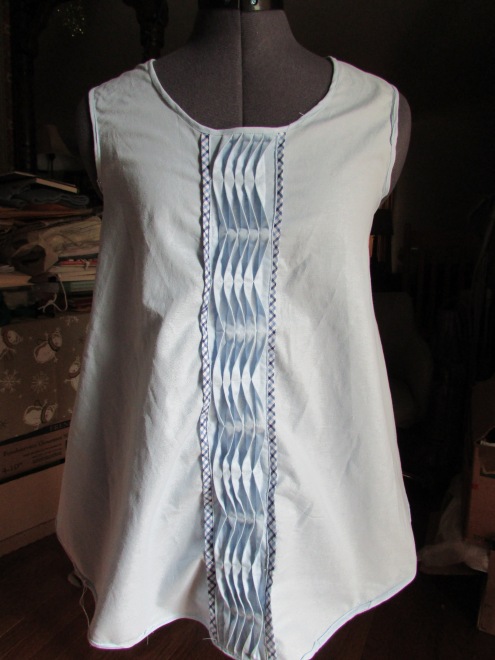 So this blouse has been on my brain ever since I came across this tutorial.

When I first saw the tutorial I knew that the Sorbetto would be the prime pattern to use. But would the bust darts get in the way? Due to my small chest I always extend those darts 1″- 1.5″. So one day when I’d run a Google search on the Sorbetto I came across the Modern Sorbetto tutorial. Perfect!

Well then. I am so that person who does wearable muslins but I’d already made the original drafting of the Sorbetto and trusted that the pattern had not changed dramatically enough that it would be an issue. Plus, I was making the Modern Version, which dispelled with those pesky bust darts.

So I cut into the fabric weeks ago, back during IPM Week One. Then proceeded to put off the actual sewing until late in Week Two, which ended in frustration and Emma pulling threads in the fabric intended for the pleats. Aaaaand I matched two incorrect marking for the pleats, so I had to cut another middle panel piece.

I set sewing aside for a week, getting caught up in job searching and trying to be productive in other ways. I finally took up the project again, about 30 hours before the Hack It! deadline.

The wavy pleats took up half of the sewing time. Because I’m a little worried about time, I’m gonna cheat and list the sections of wavy pleat sewing/ prep time:

The regular seam sewing went without a hitch. Without a thought I decided to go for French Seams (which I mentally oohed over when I saw the first line of stitching pressed). I waffled a little on how to apply the bias binding (first attach to the right side or the wrong side?). I decided on the latter but messed up with the neckline binding. And the next day (when I resumed sewing and was called into work so I had to finish the seams double time) was a mess of frustration as I raced the clock to finish this make. This post is not well edited due to the short time span and the pictures have much to be desired, but I finally posted  an entry for IPM!

11 thoughts on “Hacking a Hack”