I love summer sewing. I don’t know what it is. Maybe it’s because I feel more motivated in the warmer months. Or maybe I just like the fact that I can squeeze a summer dress out of less than 2m of fabric. For my final IPM entry this year, I wanted to make a versatile summer outfit. My plans started out with separates, but once I made a wearable muslin of the Leini dress, I knew I had to make another! Also, I’ve wanted to make the Rigel bomber jacket for so long and I thought this challenge was the perfect excuse to finally get at it. 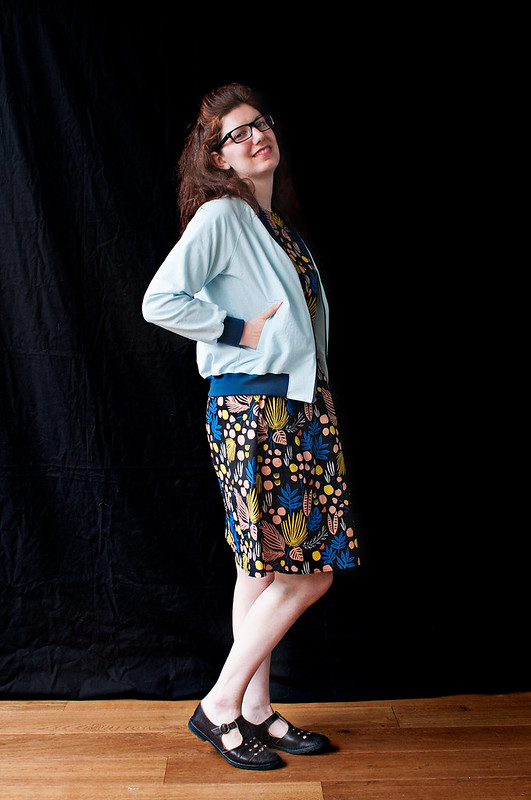 Let’s start with the Rigel bomber from Papercut, shall we? I’ve had this pattern in my stash since its release I’m pretty sure. I ordered it along with the Bellatrix blazer as  paper patterns while they were on sale. I love the retro style of this jacket and how it’s casual, but cool. If I had made it in pink and wore a poodle skirt, I could walk right on the set of Grease, I think. Most of the jackets I’ve made in the past have been either blazers or very structured, so I thought this would be a nice change. 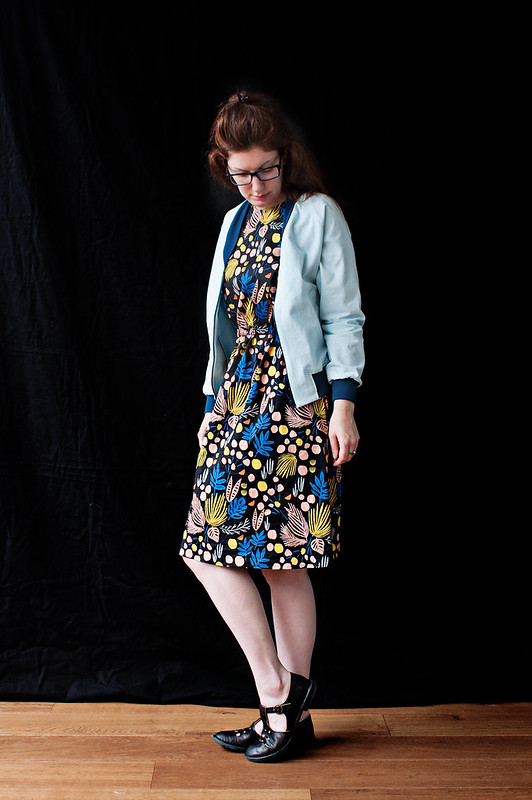 I ordered this fabric online, thinking it was linen. Well, it’s linen, but it’s actually a linen/cotton blend, which is an entirely different fabric. Also, I wouldn’t really consider it a fashion fabric, but more of an upholstery fabric, like something you’d make curtains or a pillow cover out of. I originally bought it to make a BHL Anna dress, but quickly decided I would use it for this jacket instead. I figured it would make a great summer jacket because of the linen content. All I needed was a zipper and ribbing. I also ordered the ribbing online and was disappointed to find that it wasn’t wide enough! So I just stretched it out a bit to fit the pattern pieces on it. 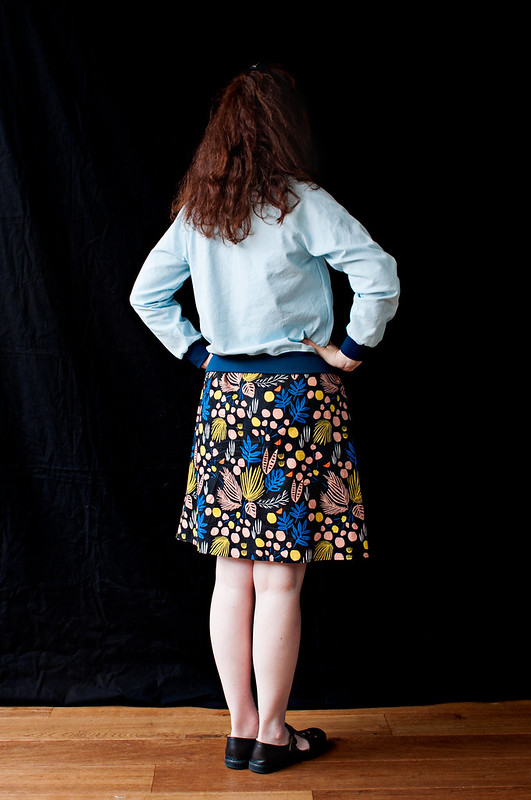 The pattern is really easy to use. I traced out a size S, as that’s the size I’ve been using with success from Papercut patterns. There aren’t too many pieces, which is always a plus, and you only need 1.4m of fabric. I’m not sure how I feel about the instruction ‘booklet’ it came with though. The booklet is printed on the paper with the pattern pieces. You’re supposed to cut it out and fold it like an accordion. Since there are quite a few instructions (4 rows x A0 sized paper), the accordion is quite high and I’m not sure how to store it. There were also a few instructions I had to re-read a few times. They’re clear, don’t get me wrong, but sometimes the accompanying diagrams weren’t terribly helpful (and I was too lazy to look up any tutorials/sew along posts). 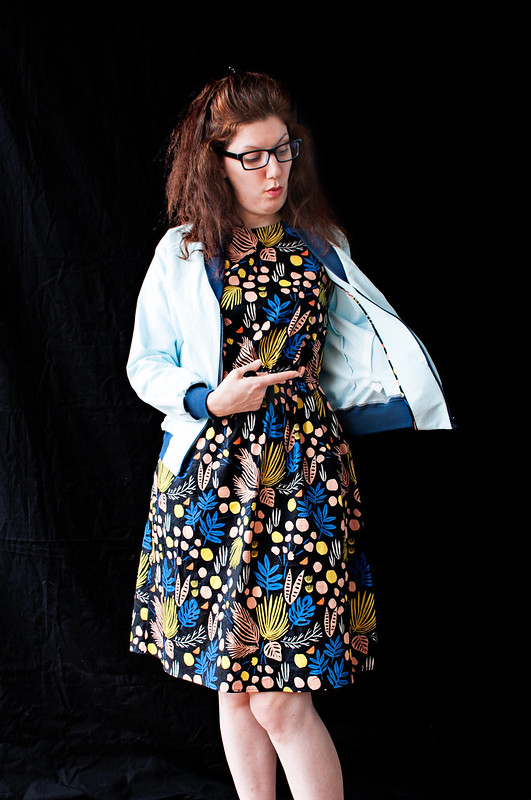 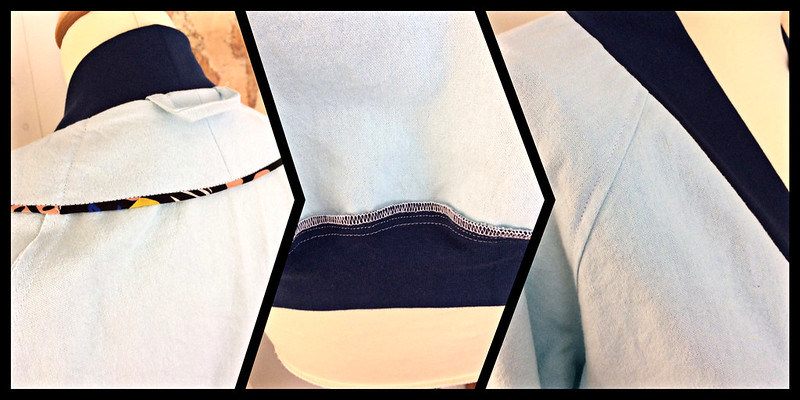 When they told me to ‘neaten the seams,’ I used all sorts of different seam finishing techniques. I used my overlocker, zigzag stitch, lazy flat-felled seams, and bias binding. I say lazy flat-felled seams because I didn’t trim and press the seam under itself on the inside. Instead I just pressed it and top-stitched it. It would have been easier to do that if the seam allowance is 1.5cm as opposed to 1cm. I also added bias binding to finish the facing, which matches the dress.  The other special detail I added was a loop to hang the jacket up. I’m so happy I remembered to add it because our hall closet doesn’t have hangers, just hooks. 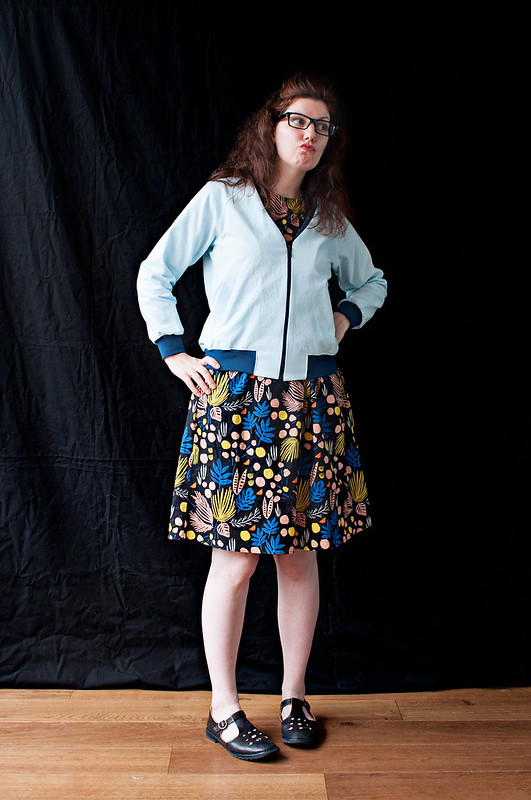 In the end, I’m not sure how I feel about this jacket. I think it looks a bit odd when it’s zipped-up. Also, if I make any future versions I think I will add a lining because I don’t really like that all the interfacing from the welt pockets is exposed.  There is a great tutorial on how to do it on the Katy & Laney blog. Not only is the interfacing unsightly, I couldn’t find a pretty way to finish the raw edges of the pockets, so I zig-zagged them. Maybe I will try my next version with a sweatshirt or double knit jersey.

On to the second garment: the Leini dress by Named Clothing. Sadly, Named doesn’t carry this pattern anymore, but here’s a link from Kollabora to see the line drawing. I chose this pattern because it looked like a project that’s easy to sew, easy to wear, while being beautiful at the same time. I love a dress that you can easily take from day to night and that’s both comfortable and chic. I think this dress fits the bill. You can’t really see it in the pictures, but there’s a large pleat running from the shoulder to the waist, which is a special little detail that Named Clothing added to take this from a plain sundress to a special item. 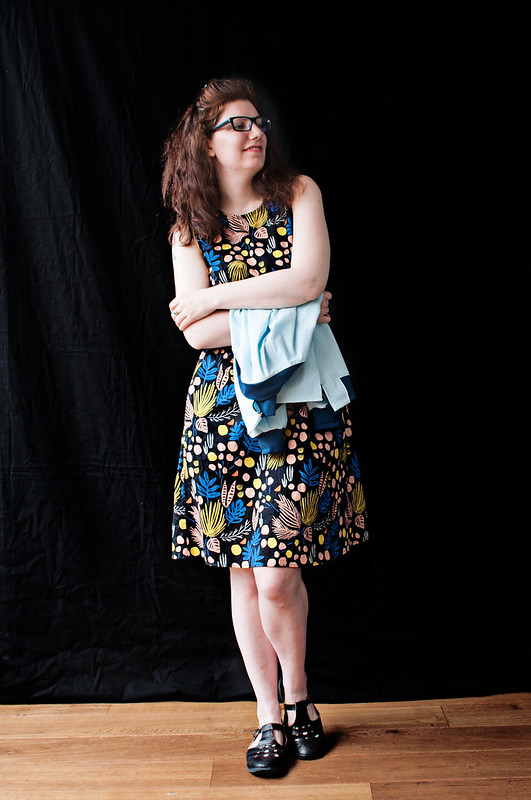 The fabric I used is an organic cotton voile from Cloud 9 fabrics. The print is called Yucca (in case you want to find some yourself). It made me a bit nervous to cut into this precious designer fabric, but since I’d made 2 muslins already (one wearable and one not), I was fairly confident that I’d love the end result. I wasn’t wrong. It’s such a nice, light summer fabric and I think it pairs really well with the pattern. 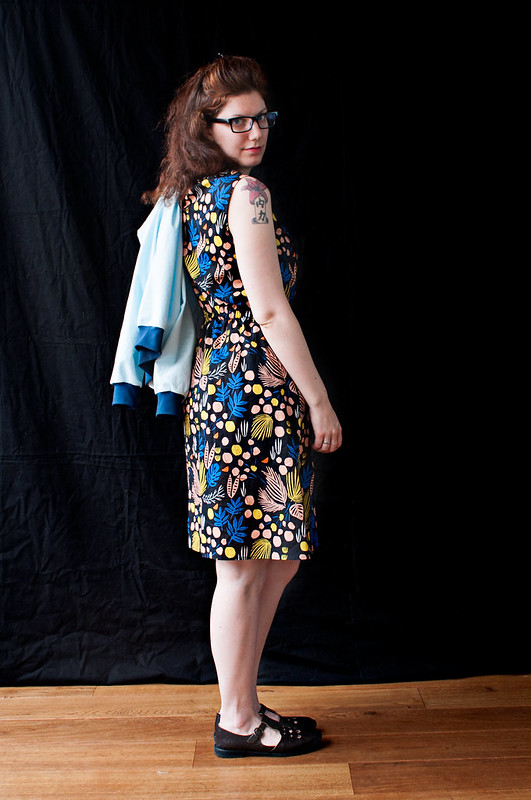 This is my first Named Clothing pattern and I’m very pleased with it. This pattern was from their second collection I think, and I love the way they lay out their PDF pattern. To save paper, they layered the pattern pieces on top of each other. Kind of like a sewing magazine, but much less chaotic because it’s only one pattern. Unfortunately, I think they received a lot of feedback that people didn’t like this, so they’ve gone the more ‘traditional’ PDF pattern route in subsequent patterns. The instructions are good as well, no complaints there. 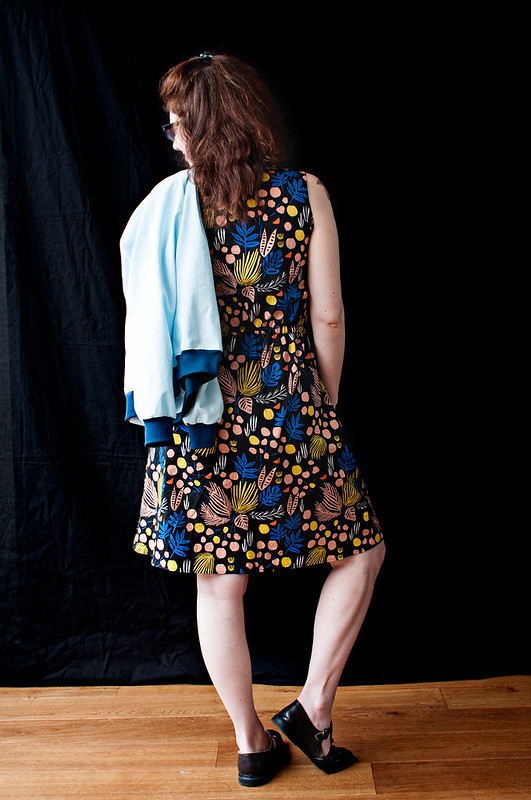 I made a few changes. First, I lengthened the front bodice by 4cm and made the back bodice 1cm shorter so it didn’t look like it was pulling up in the front (kind of like a makeshift full bust adjustment). Second, I added side-seam pockets. Because, pockets. I actually planned on adding pockets to the wearable muslin I made before this, and then completely forgot to. I would suggest writing in this step in your pattern instructions so you don’t forget it! Or add the pockets as one of the first steps you do. Thirdly, I finished the neckline and armholes with bias tape instead of hemming or lining as suggested in the pattern. I hemmed the version before this and it didn’t work out so well. It’s difficult to hem if you can’t clip the curve.

I’m taking this dress on vacation with me and I’m sure it’s going to get a lot of wear this last month of summer!

A huge thank you to Kat and Mel for hosting Indie Pattern Month for the fourth time. And thank you to all the indie designers and participants as well because it wouldn’t be possible without either party. I can’t wait till next year!

15 thoughts on “Leini and Rigel – a summer love story”