Once again, I saw a yellow dress that I wanted to have and knew I wouldn’t be able to buy–this time because it retails for $7,260 USD. HAHAHAHAHA. (Ahem.)

But it is stunning. And I know I’m not the only one because I’ve seen it in several spreads in September fashion magazines. 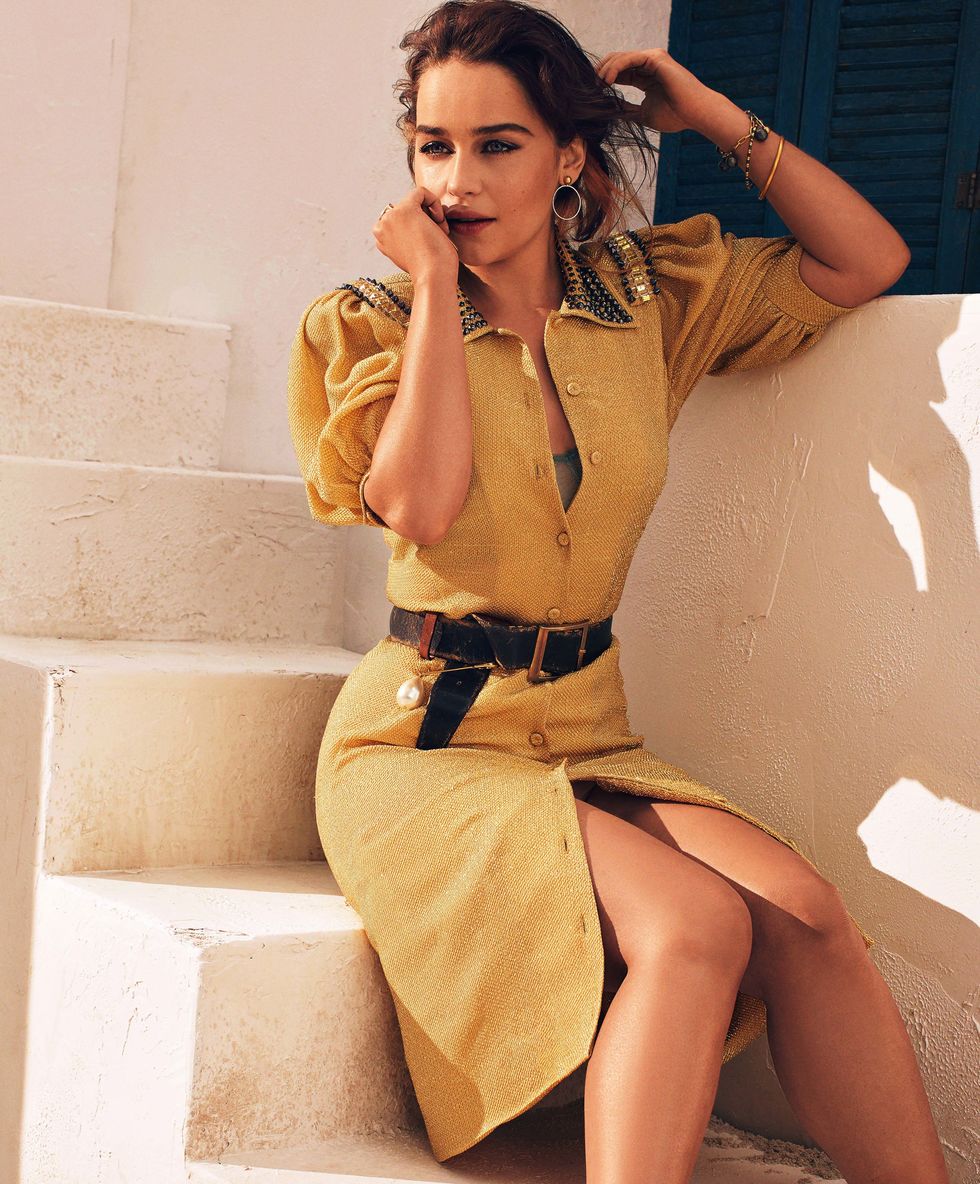 Looks a little different on Emilia.

As well as a live sighting or two.

Apparently there are people who have over $7k to spend on a dress, and Kirsten is one of them.

Silk-lurex with a gorgeous embellished collar. You can really see the lurex in the Kirsten shot. To me it looks like a knit.

The collar and shoulders are just stunning and completely worth building a Monthly Stitch post around. I wouldn’t do dimensional embellishment on a project like this for myself as I want something I can toss in the laundry without fear, and I’d worry about wear and snagging. But this, I thought, was a great opportunity to try out a blackwork collar, and just in time for the Monthly Stitch’s collars challenge.

Which was in September. I didn’t factor in anything like enough time to embroider the collar, so this is a month late. But better late than never and it did turn out well, so…

I found a dark gold-yellow stretch silk in a store on Queen W for $59/yard … and put it back. Gorgeous but I would have been terrified to wear it to work. So instead I used a dark yellow brushed rayon, without stretch, from Fabricland on sale for under $10/m. I bought 2, and just barely managed to eke out the altered pattern pieces.

The Back. Wrinkles caused by posture, not pulling.

So this $7,260 USD dress was copied for about $30 CDN, if you include buttons, thread and embroidery floss.

M7351 has the shirt dress with an a-line skirt and a collar, but it doesn’t have the puffy elbow-length sleeves or the length. (It also doesn’t have the hip seam line but I wasn’t really a fan of those as they don’t seem to fit the model well.) So first step was altering the pattern:

This is the Big 4, so of course it makes no sense.

Which is the point of the post, and also extremely technical and complicated, and therefore boring. I wrote a more detailed and technical post on embroidering collars with lots more background here, for those who are curious.

Collar pieces were not cut out. The cutting and seam lines were traced on to the fabric,  and then the seamlines were thread-traced so I could embroider without worry of losing them.

The entire upper collar piece was interfaced, waste canvas attached, then basted to a piece of muslin large enough to fit in my scroll frame. I basted it around the edge and also around the cutting line for the collar, then trimmed away the muslin in the embroidery area. (I didn’t want to have to worry about differential shrinking between the rayon and muslin pieces later on, even though both were pre-shrunk.)

I doodled, researched, sketched, and combined blackwork embroidery ideas for the collar. I wanted something geometric and abstract that would echo the beadwork of the original, but also that had a recognizable motif. This was a tall order. I decided on the “floral lace” repeat from RSN’s blackwork book.

Again to echo the beadwork on the original, I used heavier threads at the front collar points. I worked the pattern from the points towards the centre back so the visible points would match. I’m not super worried about what’s happening under my hair at the back. I took photos of the first side then flipped it in editing software so I could exactly copy it on the other side and ensure the pattern was completely symmetrical.

Once the blackwork was done, I removed the basting stitches and cut out and assembled the collar per standard directions, following the embroidery to make sure it was exactly symmetrical.

Since the collar is the last piece to go on, I worked on the dress assembly while I was embroidering the collar. The rayon is very soft so I took extra care and fused some interfacing around the neck seamline so it wouldn’t stretch out while waiting for the collar. Otherwise: put the bodice together, put the skirt together, joined them, added the plackets, assembled and joined the sleeves, then the collar, buttonholes and buttons.

If you can believe it, after all that work, I made a small goof on the collar stand: I pinned it to the collar, decided it was 1/4″ inch too long on each side, took that 1/4″ off, pinned it again, and realized I was wrong and it was actually the perfect size before–but it was then too late. So I had to ease the dress slightly around the front to make it fit the collar stand without puckering. Woops. It turned out all right, but man, what a mistake to make, so close to the end and with a collar that was so much work to make in the first place.

The darts on the bodice ended up very pointy, so I took them out and did them again, twice.

It turned out the way I wanted, so yay! It’s rayon and wrinkles at a touch so this is as wrinkle-free as I can get it; also one of the lower buttons pulls across the hips when I sit down. Be careful of that if you use a soft fabric and make the narrow skirt. I’ve patched up a bit of pulling already and reinforced that area to keep it happier long-term.

10 thoughts on “I Keep Doing This To Myself: Copying a Bottega Veneta Shirt Dress with McCalls 7351”