This is the title of the second chapter in the most recent book I’ve read, which is titled Why Dinosaurs Matter. I would recommend it! I was sold on the importance of dinosaurs already, but it’s a very interesting book, written by the paleontologist who discovered the largest dinosaur species found so far: Dreadnoughtus.

But on to the penguins! I like the ‘anything but clothes’ challenge and it came well timed with a friend at work’s return from maternity – so I made these penguins as a little present for her new addition to the family. 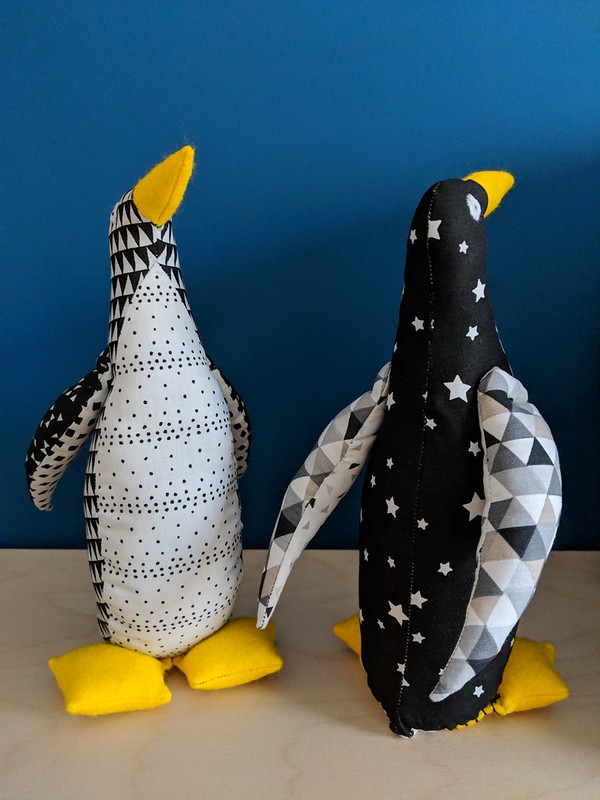 The pattern I used is the Purl Bee penguin. If you haven’t yet explored this website, you really should! It’s a treasure trove of (mostly free) sewing and knitting patterns.

I spent absolutely ages to put together seven black and white prints that would work well together, four that were darker and three are lighter, so now I can make an army of penguins that are all individual yet look coherent! 😀 The main fabric is a nice organic quilting cotton from Higgs and Higgs and the yellow felt is a viscose and wool felt from Minerva Crafts. I went for organic cotton and felt without polyester in it so that it would be safe for a little one to put in their mouth as part of playing. The stuffing is polyester, but that makes it machine washable which I reckon is probably practical. 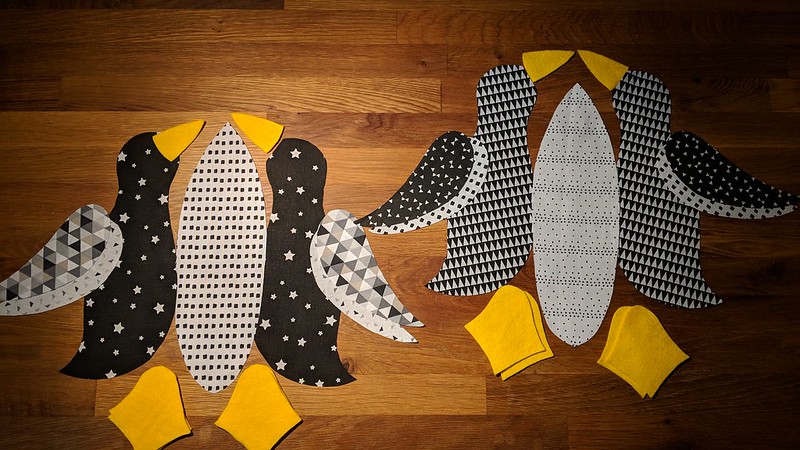 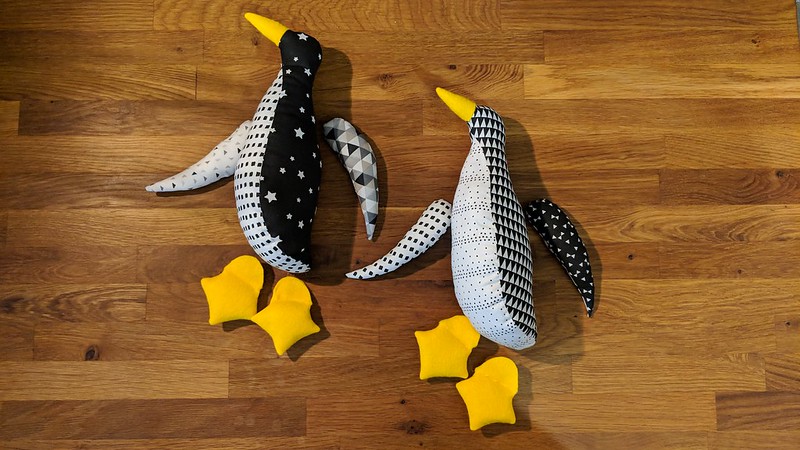 Before assembling the penguin

My mum had the best tip however, which is that if they’re a present for a small child then you shouldn’t use buttons for the penguin’s eyes! This probably wouldn’t have occurred to me, so I’m glad she suggested it. I embroidered the eyes on instead, which I think works quite well! 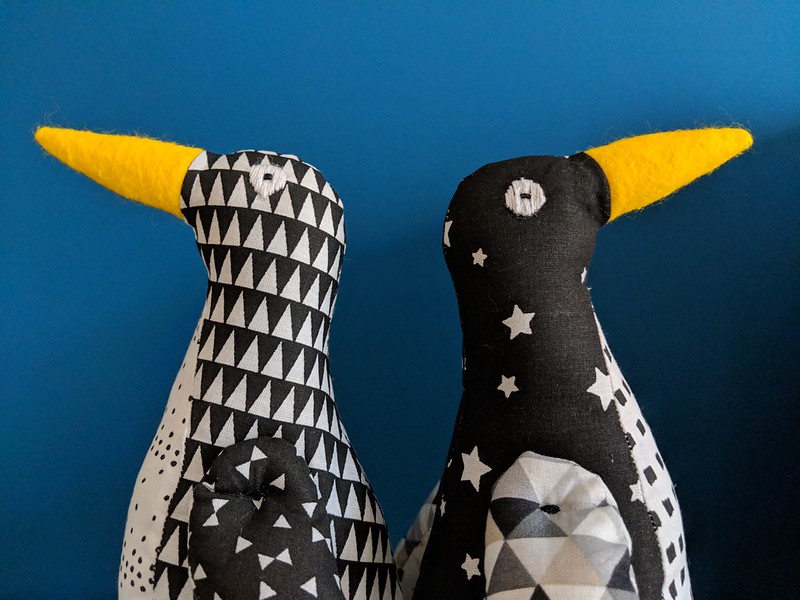 The pattern is a little fiddly to make because it includes small pieces and you have to be quite precise to get the shaping to turn out nicely, but other than that it’s a straight-forward project. The only small alteration I made after my test penguin is that I cut a the bottom of the belly piece a bit more rounded at the bottom, so that their bum is shaped a little better. You do also need to ease the belly piece to the main body pieces a little and the triangle where the 3 pieces meet underneath the beak needs to be precise to turn out nicely (unpicker at the ready and you’ll be fine). 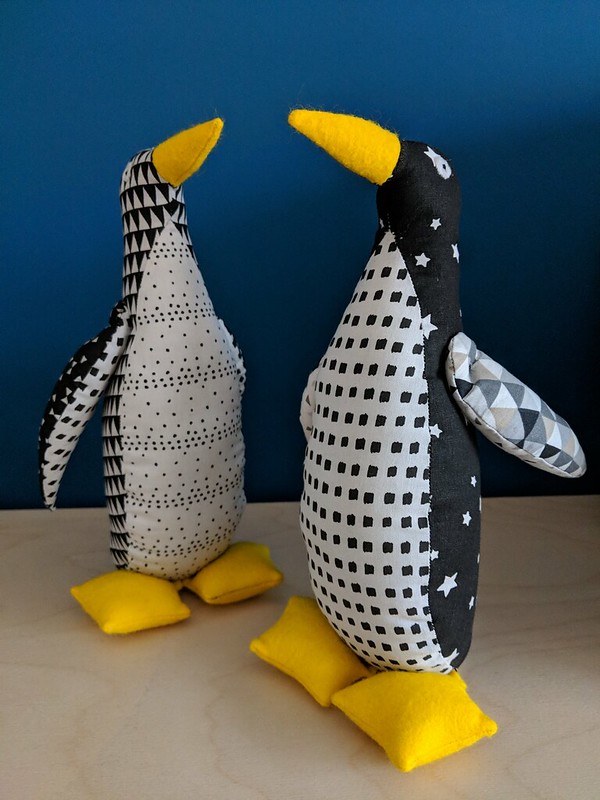 The other slightly tricky thing is to ensure that you position the penguin’s feet in such a way that they stand up! This just takes a bit of trial and error and if you’re struggling to get the penguin to stand then try turning the feet upside down or swapping the left and right foot (as they are symmetrical in design). 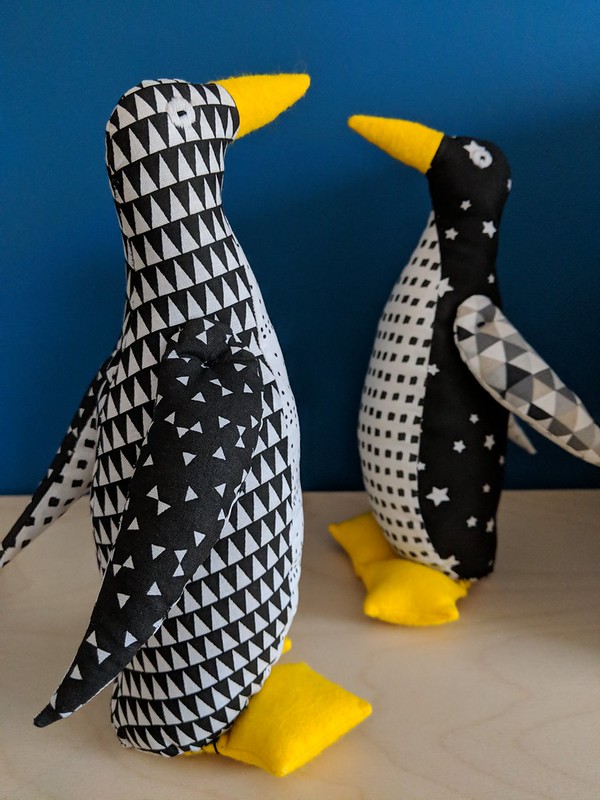 Oh and – spoiler alert – penguins are indeed dinosaurs (I knew that! 🙂 ).

7 thoughts on “Is a penguin a dinosaur?”