I have been sO inspired and amazed by all the creations that have been submitted for this week’s challenge. So fabulous! Allrighty- so here is my entry for Around The World–the Named Kielo Wrap Dress …with the Free Sleeve!! um, I love things that are free- I might have added the sleeve simply because it was free…not really, I  just love sleeves! So, Named Patterns is in Finland and I am in the United States- so it fits for this week. Yayy! I, of course, had seen this dress for quite some time around the internet world, but was pretty daunted by it- and then I saw the sleeeeeves and had this idea that with sleeves, this dress becomes kind of like a blanket–WHO DOESN’T WANT A BLANKET DRESS!!  Well, at least, I really wanted a blanket dress- so that’s what I set out to make. 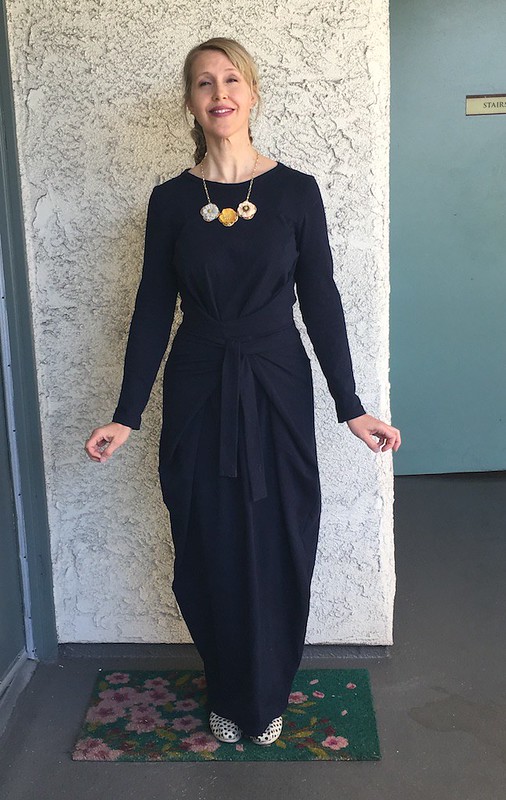 I do want to mention, that, if anyone reading this has ever made the Kielo dress before and blogged about it- thank you so much- I probably read your blog, since I spent about 2 nights obsessively reading about how to make this thing and I think I covered EVERYONE’S makes. The one thing many people talked about was the difficulty in the pdf print- how there was some type of layering happening so you have to print off copies of some of the pages- omg, my head hurts just reading that–how I continued on to making this, I have no idea– I guess my compulsive need for the blanket dress thing outweighed everything else? Anyways–as of October 2018- it looks like they have fixed any of those issues, because I printed it out, taped it up and was done–this is a MASSIVE pattern though- and while adding the sleeve pdf was pretty straight forward- that’s definitely not what I thought when I printed them out: 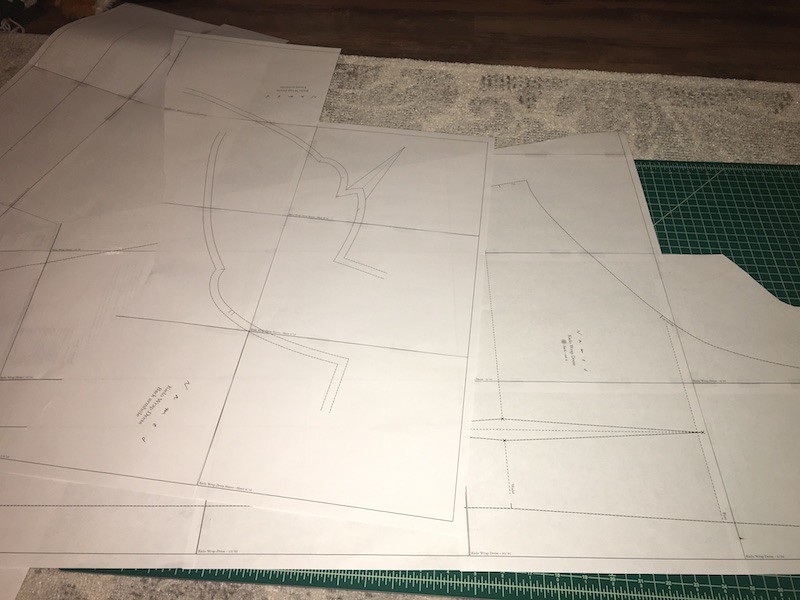 Seriously–do you see the printout with the lines going nowhere? That’s the sleeve pattern add on- looking at it here, I kind of feel like a genius right now that I figured it out. But, I promise, it really is explained very well in the instructions–

I also made sure to stay stitch the neckline since so many people talked about the neck stretching out–I went with a bias bound neckline and used Made By Rae’s tutorial using a strip from my fabric and I think it worked out great. Speaking of the fabric…I used what I believe is a lycra knit that I bought from Girl Charlee a while ago-that ended up being too lycra-ee, heavy and stiff for what I originally wanted, but I really like the structure it gives to this pattern– 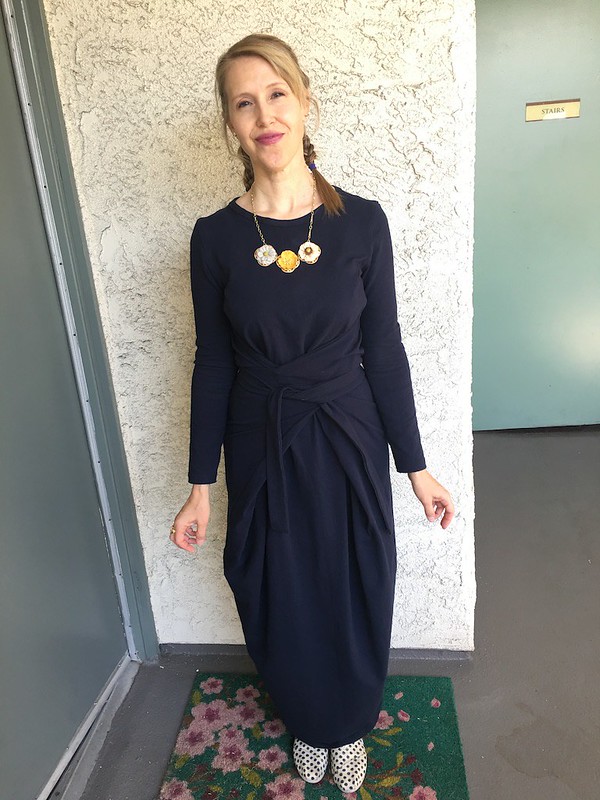 Now, the only issue with this fabric would be that, while I wouldn’t necessarily say that’s it’s lint-magnet per se… but more that it’s some sort lint-siren–where it seems to call lint, string, animal fur and really anything else you would never want to have on or near your clothes, to this dress. So, that’s fun. 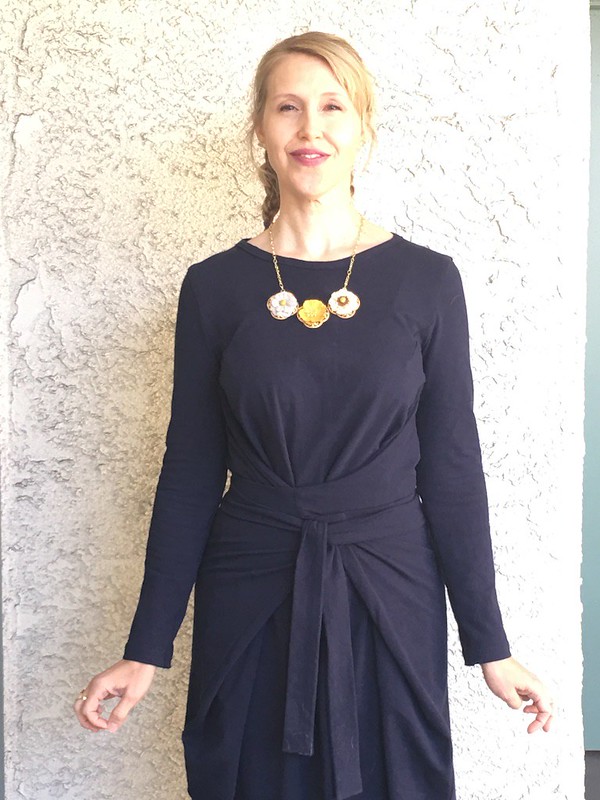 I really do like the fabric criss-crossing–it kind of keeps your eyes away from the dog-lint-string combo happening at the end of the straps:)

The only change I made was that I made the straps a little wider than the pattern–why don’t they actually look that way you say? Well, I’ll give out a little piece of advice here—maybe watching Luther on Netflix while trying to do math on a pattern isn’t the best idea. It just might not go the way you intended, and you might end up with straps that have no seam allowance because you were terrified out of your mind that Idris Elba was not going to catch the very very bad guy, so you forgot to add it. Just saying.

But honestly, in the end, I think they work well being just a teeeensie bit wider- because I think any more would have been overwhelming and I would have been drowning in blanket straps. This way it’s just cozy and the lycra in the fabric kind of holds it all in–it kind of feels like a swaddle- well, now that I say that, it sounds weird. Let’s just stick with blanket dress.

Let’s do some pictures– 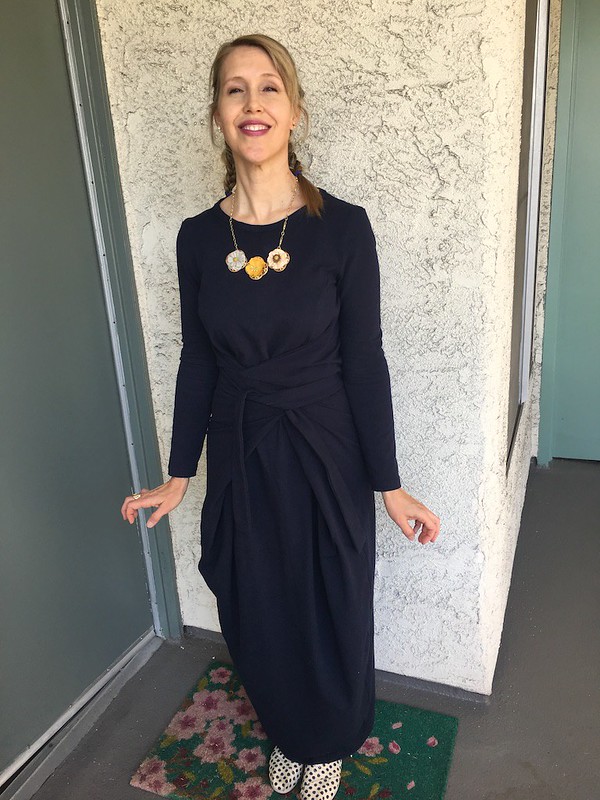 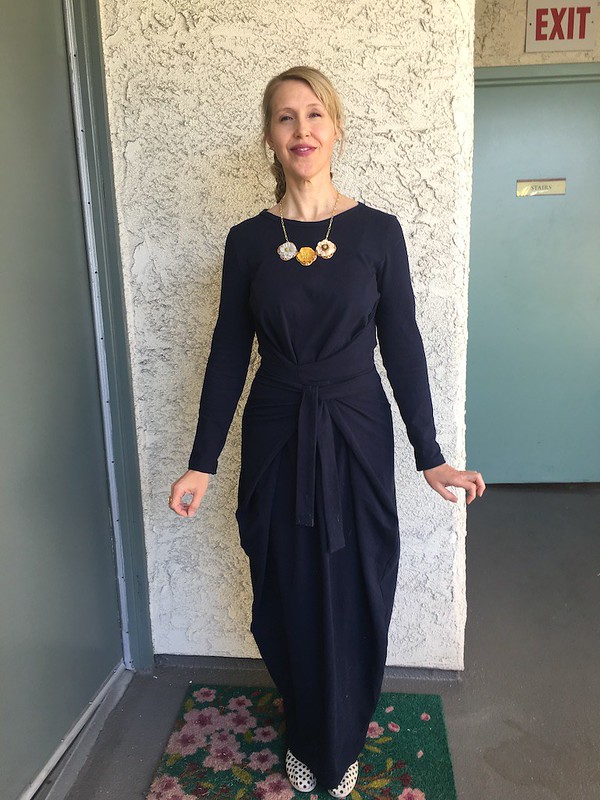 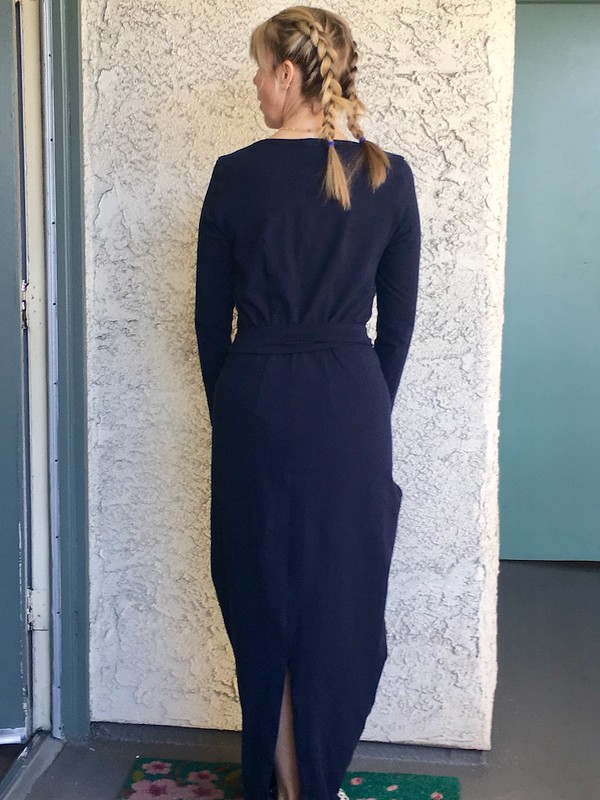 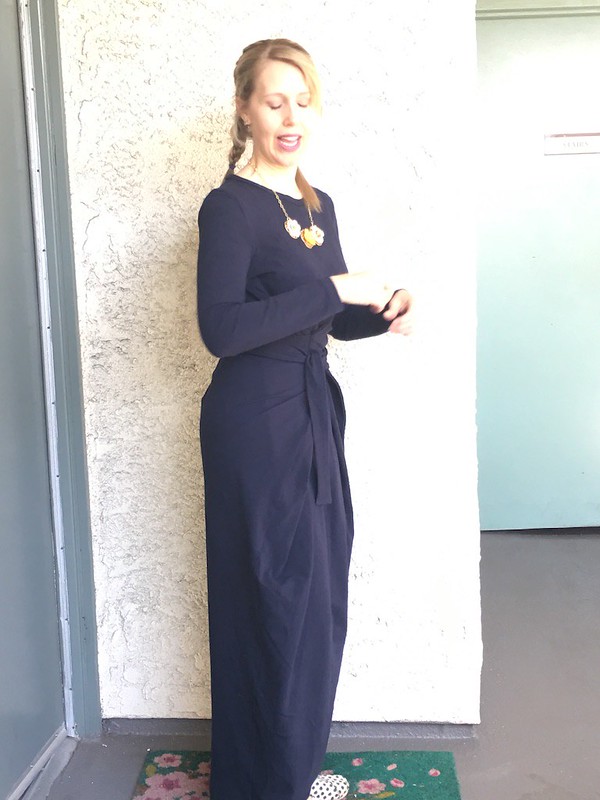 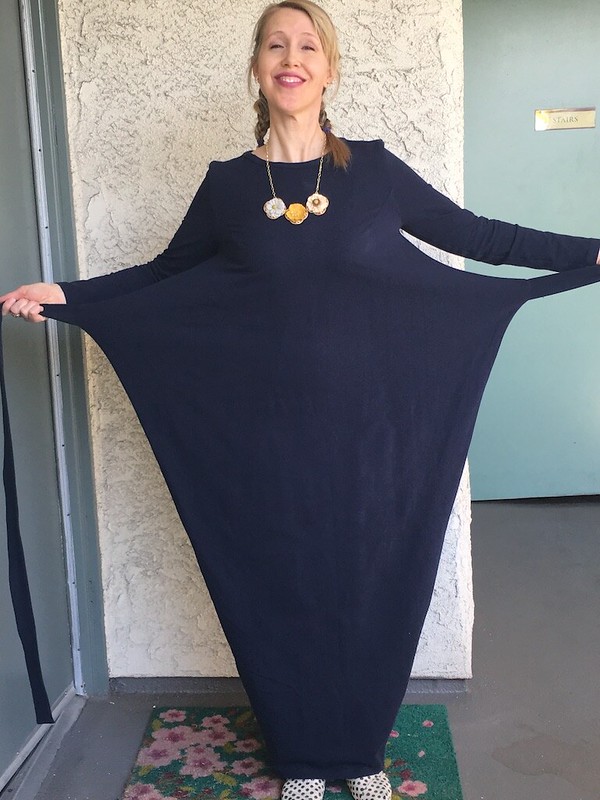 Everyone knows–must do the flying squirrel

Thanks so much Monthly Stitch! Indie Pattern Month is awesomely fun!

5 thoughts on “Warm and Kozy Kielo”