I finished a set of very seasonally inappropriate Sorbetto tops this month — but I had a wee bit of a headstart as I’d cut them both out in late November with the greatest intentions of getting them made up for a contest…which did not happen!

So I began work on them again at the end of my holiday break, and happily finished them both so I could wear them this week. Even if it was freezing out and I had to wear a cardigan over them to actually manage a day at work!

The Sorbetto is a quick and simple woven tee — it was released as a free pattern by Colette way back in the early days of their company but has recently been rereleased (still free) as an updated and revised edition now with three views, and including sleeves. 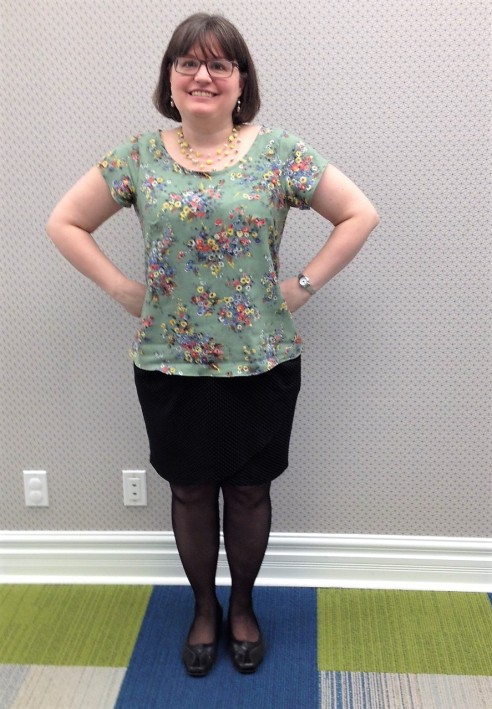 My first version used a small piece of vintage fabric that I thrifted — it’s very soft and drapey, and I love the muted colours (though it does wrinkle easily as you can see from this photo taken at the end of the day). I had to remove the pleat from the front of the design so that I could squeeze it onto the narrow fabric, but I did end up fitting it all in, including some short sleeves. The neck is finished with some pieced self-fabric bias binding. I like the way this one floats over the body and know I’ll wear it a lot. Especially in the summer!

The second one was made from some grey cotton-linen leftover in my stash from when I made a skirt out of it nearly 5 years ago! That’s some aged fabric. But it is a perfect canvas for some embroidery, and the Sorbetto pattern is also a perfect match, since the pleat covers up the back of the stitching and all the stabilizer bits once the stitching is done and the shirt is constructed.

I used another free pattern, from Mary Corbet’s embroidery site, for the floral spray, and chose a mustard colour scheme since I just love yellow and grey…I’ll call this one as #sewyellow! I worked on this on and off over the holidays, and was able to finish it up and put the top together at the beginning of this month before I went back to work. I used the sleeve pattern from the new Sorbetto this time and just sort of made them fit 😉

While this looks much better without a cardigan, seasonal weather means one was necessary for much of the day. I look forward to warmer days when I can show this one off a little bit more. It’s early days yet, but I am thinking this might turn out to be one of my favourite makes of 2019.